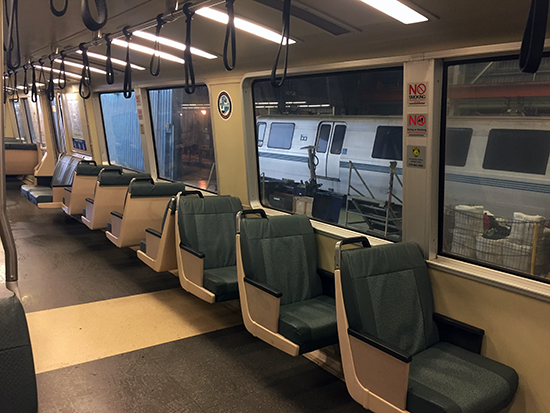 A car with modified seating, a short-term fix to increase capacity until new trains are in service, along with longer hand-holding straps to give riders more stability (especially the short ones)

Short people, rejoice!
BART is adding longer hand-holding straps on train cars with modified seating that creates more open space.
About 380 cars in all have the modification, which features one row of single seats, and is a short-term fix to increase capacity until new trains come on line. So far, the longer-hanging straps have been installed in 187 cars, supplementing existing shorter straps.
The straps help not only those who are shorter but also anyone standing who needs to hang on to keep their balance.
As a 5-foot-1-inch-tall, balance-challenged rider with no skill at BART surfing, I tried the longer straps out and found I could hold on without feeling it in the shoulder socket.
BART is working with the California Public Utilities Commission on the final stages of certification for passenger service for the new trains There's no date set yet for start of service, but we expect it to be soon. And those new trains will have some of the longer straps, too.