BART’s new Fleet of the Future train is here. The very first customers to ride the new train cars boarded the train at MacArthur Station this morning as it made its inaugural passenger run. The new cars feature a wide spectrum of improvements over BART’s legacy fleet, currently the oldest fleet in the nation. The Fleet of the Future cars are:

Perhaps the most notable difference is that the new cars have three doors on each side instead of two which will allow for quicker on-and-off boarding. This is important as BART works to improve its capacity to carry more passengers; since BART first ordered 775 new rail cars in 2012, ridership has grown 14 percent.

“I am thrilled our riders finally get a chance to ride in these cars they helped design,” said General Manager Grace Crunican. “These state-of-the-art cars represent a new chapter for BART. Commuters and casual riders alike will notice a huge improvement in their experience.”

BART’s Fleet of the Future has undergone extensive testing to reach this milestone, including more than 2,900 modifications to the pilot cars before full production began. Now that the California Public Utilities Commission has certified the new train cars for passenger service, the 10 pilot cars will be put into service.

For the initial phase of carrying passengers, the new train will run on the Richmond to Warm Springs/South Fremont line during non-peak hours Monday-Friday (9am-3pm and 8pm until Midnight) and on weekends. It will run during commute hours and on all the lines once it has had some time out in the system carrying riders.

BART has an additional 10 cars from the production line at our facilities and once those cars complete final testing and certification, they too will join the fleet for passenger service.

BART will get its next delivery of new cars in February. Over the next year production will ramp up to a rate of 16-20 new cars per month. The balance of new train cars is scheduled to be delivered by Spring 2023.

Other features include 50% more priority seats than our legacy cars, bike racks, poles for standees to hold onto, and wider aisles. They are also energy efficient.

While BART already has 775 new cars on order, it is seeking funding for an additional 306 new cars to meet the needs of a system that will extend service 16 miles into Silicon Valley.

"The sight of this new train in service is a sign of a brighter future for BART customers," said BART Board President Robert Raburn. "Adding new train cars and phasing out BART's legacy fleet is just one of the ways we are modernizing. We are also replacing track and infrastructure and bringing on a new train control system to improve reliablity and run trains closer together. But for now let's all enjoy the look and feel of the brand-new cars."

Riders who get the chance to board the first Fleet of the Future train can submit feedback to FOFdesign@bart.gov.

Learn more about all the exciting features at www.bart.gov/cars 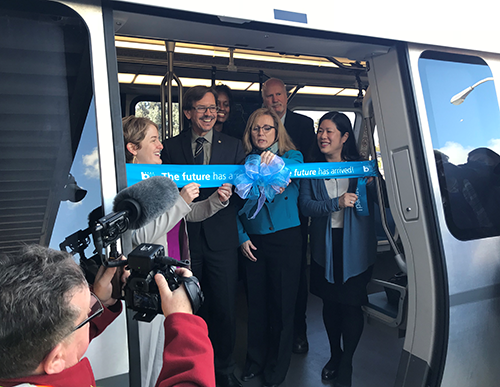