A quick response by BART police has led to the arrest of a suspect in connection with the overnight assault that happened outside the Warm Springs Station on Thursday.

21-year-old Joshua Fecker, a transient, has been arrested.  Fecker is the same man shown in surveillance images captured by BART cameras at the Warm Springs Station that were released to the public.  A BART police officer recognized and detained Fecker at the Richmond BART Station Thursday night. After an interview by BART police detectives, it was determined Fecker was the suspect in Thursday’s attack.

Fecker has been booked into Santa Rita Jail.  His arrest came less than 24 hours after the overnight assault.

The BART Police Department is releasing images of a person of interest in connection with the overnight stabbing outside the Warm Springs BART Station during non-service hours.  Police investigators are asking for the public’s help in identifying this man so they can interview him.

Fremont police received a call at approximately 2:18 am of a man lying in a street near the Warm Springs Station.  A 39-year-old man, who appears to be a transient, was found with non-life threatening injuries to his chest and buttocks.  The case was turned over to BART police when it was determined the incident happened on BART property.

The incident occurred outside the BART station after the station had closed.  The details surrounding the assault are not entirely clear, but an investigation is underway.

Anyone with information on the person of interest or the incident should call BART police investigators at 510-464-7040. 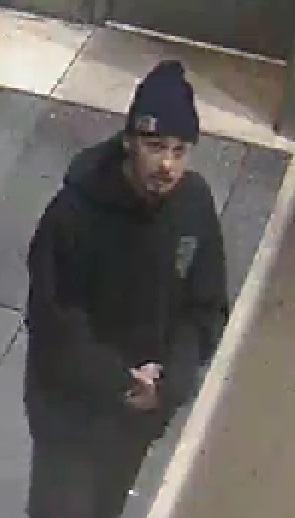