UPDATE: This board meeting will be livestreamed and recorded for future viewing.

Rider safety will be the focus as the BART Board of Directors holds its Thursday, September 27th meeting at 5pm at Pittsburg City Hall.  The BART board voted in August to hold a special night meeting in a suburban location to further discuss General Manager Grace Crunican’s Safety and Security Action Plan.

“The special time and location of this board meeting will give more members of the public the chance to share their thoughts about public safety directly with board members,” said BART Board President Robert Raburn.  “We need their input as we take action to make BART safer.”

The meeting will include an update on BART’s proof-of-payment strategy.  There will be a presentation with citation data as well as a hearing on a request to hire more community service officers to expand the program, which was launched in January.  Further, the board will get an update on station infrastructure efforts to deter fare evasion.  That is likely to include a discussion on whether to replace BART’s fare gates.

BART Police Chief Carlos Rojas is scheduled to present a new report from the University of North Texas on the BART Police Department.  The report includes recommendations for adequate police staffing levels at BART.

The board is moving towards adopting a district surveillance policy.  A final vote on this policy could come at this meeting depending on actions that take place at the September 13th meeting.  BART has already made clear that any boosts to system safety will not include the implementation of facial-recognition technology.

We also anticipate an update on efforts to increase parking around the new BART to Antioch line.

The meeting is open to the public. The public may comment at various points throughout the meeting- including the public comment period or during specific agenda items.  The agenda is posted at https://www.bart.gov/about/bod/meetings/2018

The meeting will be held in the Pittsburg City Council Chambers, which is on the third floor of the building.  The council chambers are located at 65 Civic Avenue, which is a short walk from the Pittsburg Center Station on the new BART to Antioch line. Courtesy of Tri-Delta Transit, there will be a shuttle available in the pick-up lot at the corner of Railroad Avenue and California Avenue to transport attendees between the BART station and the City Council Chambers.  The shuttle will run from 4:15 pm to 11:15 pm. There will be directional signs at the Pittsburg Center BART station and the shuttle pick-up and drop-off locations. See map below: 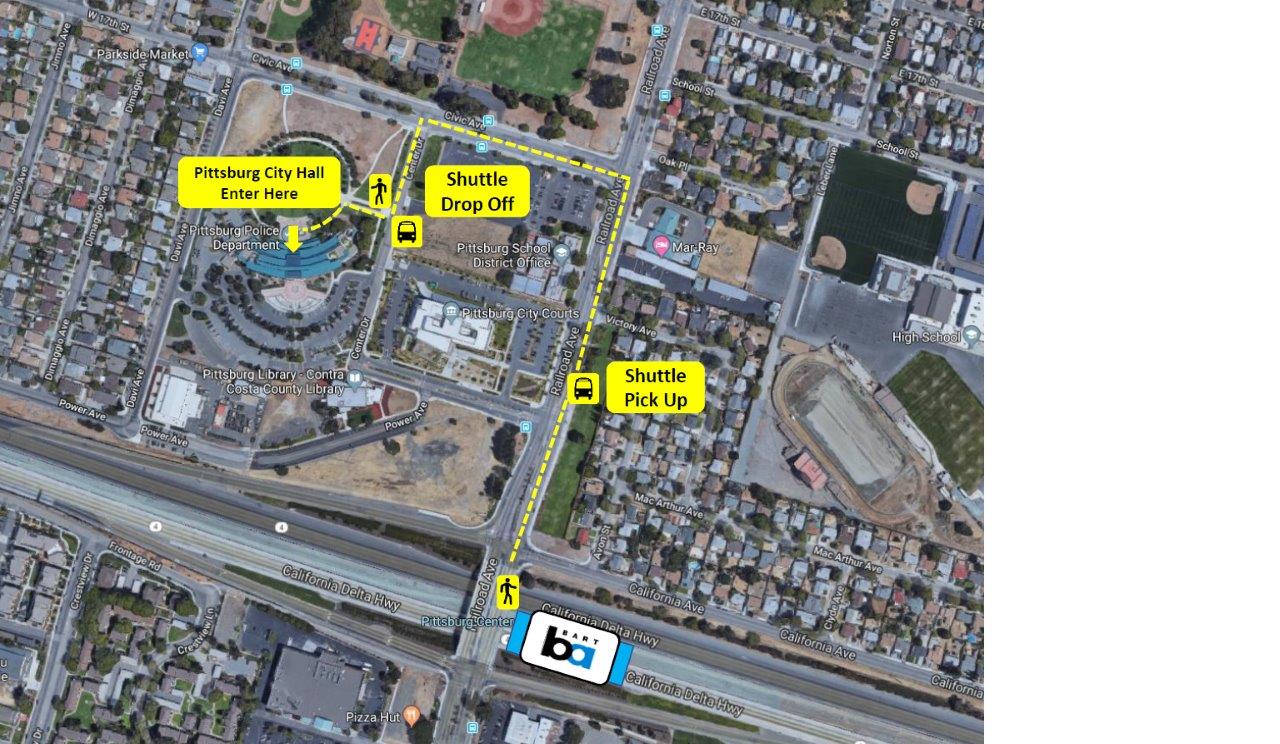 From all points west:

Turn left onto Center Drive, drive past the Justice Center and the Library

There is a parking lot in front of City Hall

Turn left onto Center Drive, drive past the Justice Center and the Library

There is a parking lot in front of City Hall