Six months into a pilot to provide elevator attendants at two BART stations, data show the program is helping to keep stations cleaner. And it’s getting rave reviews from customers, too. 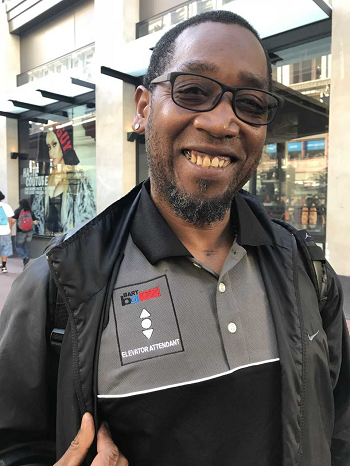 The pilot at Civic Center and Powell Street stations began on April 30, 2018, and will continue through June 30, 2019. It’s funded by BART and the San Francisco Municipal Transportation Agency, using workers placed through the community-based organization Hunters Point Family to serve as attendants.

“We have seen a significant drop in misuse of those elevators,” to virtually nil, said David Coggshall, Assistant Superintendent of System Service. “The elevators are being used now by the people they’re meant to be there for – people in wheelchairs, with strollers, senior citizens, luggage, anyone who would have trouble on escalators or stairs.”

The pilot had its hiccups, as with anything new, and it took some time for the word to get out that the elevators are now clean and staffed with friendly, helpful attendants. They greet riders with a smile and a welcome, and have gotten to know their “regulars,” people who use the elevators every day, by name.

“If we get a call for clean-up in those elevators now,” Coggshall said, “it’s for something accidental, such as if a customer spilled their coffee. It’s not because someone has intentionally soiled it, and it doesn’t sit there and get worse. The attendant calls our cleaning staff and we can be right on it, immediately.”

Take the month of September, for example, a busy ridership month as summer ended, schools started back and there were large crowds for sporting events and business conferences. Data sheets logged by the elevator attendants show that more than 46,500 people rode the elevators at Civic Center, and more than 32,500 at Powell Street. 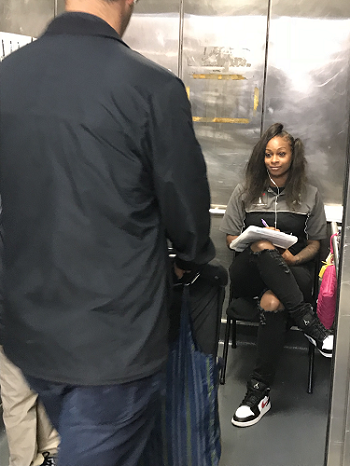 Of those, 2,851 were pushing strollers at Civic, and 3,437 at Powell. Attendants logged 4,649 elevator users as mobility-impaired at Civic (by visual check, such as those using wheelchairs, canes or crutches) and 2,433 at Powell. Somewhat surprisingly, Civic had more elevator users with luggage – 18,110 – than the count for Powell, a mecca for tourists, which had 14,610.

For the entire month, the elevator attendants logged 4 needles and 9 cases of biowaste in elevators at Civic, and 2 needles and 6 biowaste cases at Powell, most likely occurring during an attendant’s break period. Elevator misuse had not been logged in that fashion before, but regular staff of the stations say the problems in elevators were much, much worse prior to the pilot.

“We never really had a count before of who was using the elevators,” said Paula Fraser, Assistant Chief Transportation Officer for the downtown San Francisco lines. “One of the important things about this pilot has been quantifying the role that the elevators play, whether that is for our ADA (American Disabilities Act) community, parents with children in strollers, or tourists with luggage.”

So what’s next for the elevator attendant program? BART’s Fiscal Year 2019 budget will fund the attendants through June 30, 2019. Moises Santoyo, Workforce Analyst for Hunters Point Family, said the organization is continually recruiting more employees to take the attendant jobs and training them to make sure they have the right skills.

With winter and the rainy season coming, everyone involved is anticipating the seasonal uptick in people seeking shelter in stations. The elevator attendants’ response is being coordinated with BART personnel including cleaners, police and community service officers, in an effort to help connect those in need with social resources.

Customer response to the elevator attendants bodes well. Attendants hand out mail-in postcards to elevator users to send their feedback. More than 700 people have taken the time to write comments and mail them back.

“The attendants have made a huge difference; it no longer smells like an outhouse,” one wrote.

“The elevators are cleaner, and also, I feel safer,” another wrote.

“I am a disabled wheelchair user and I LOVE your new attendant system,” one wrote. “Please continue this!!!”

Tim Chan, BART’s Group Manager for Station Area Planning, concluded, “The response from customers has been overwhelmingly positive. This program has been a real win-win.”