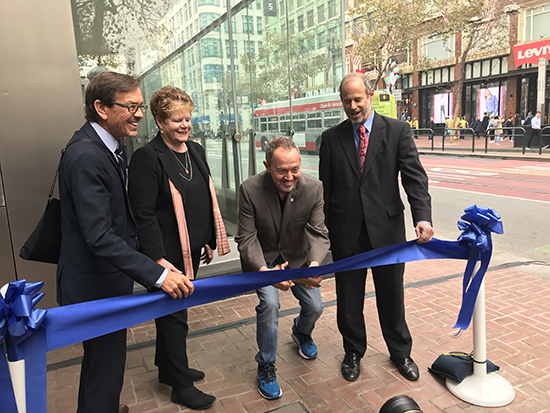 “The canopies mark a significant improvement,” says BART General Manager Grace Crunican. “They will not only help protect our escalators from the elements like weather and debris, but from misuse because they can be locked at the street level each night when the stations close.”

Each canopy includes a real-time digital display that shows train arrival times, a retractable gate, LED lighting and security cameras. The two canopies were built as a pilot project and more are coming above all of the remaining 22 BART and San Francisco Municipal Transportation Agency entrances above the four downtown San Francisco stations.

"Some of our riders are much more reliant on the escalators than others, people with disabilities, people with other mobility challenges, maybe people with suitcases," says SFMTA Director Ed Reiskin. "So to be able to give them more reliability is really important to us."

The canopies are part of the joint Downtown San Francisco Market Street Canopies and Escalators Modernization Project, which will also replace 41 escalators at the Embarcadero, Montgomery, Powell and Civic Center stations. 23 of the escalators being replaced run between the street to concourse level and 18 escalators from the concourse to platform level. The canopies are a state code requirement for new escalator investments.

BART worked closely with the City of San Francisco’s Better Market Street campaign and with the SFMTA on designing and securing money for the project.

“This is the future of BART,” says BART Board member Bevan Dufty. "You're going to have a safe entrance, new trains,elevator attendants.,,, This canopy keeps faith with our station agents so they can come to work in the earliest hours of the morning and be there for our riders." 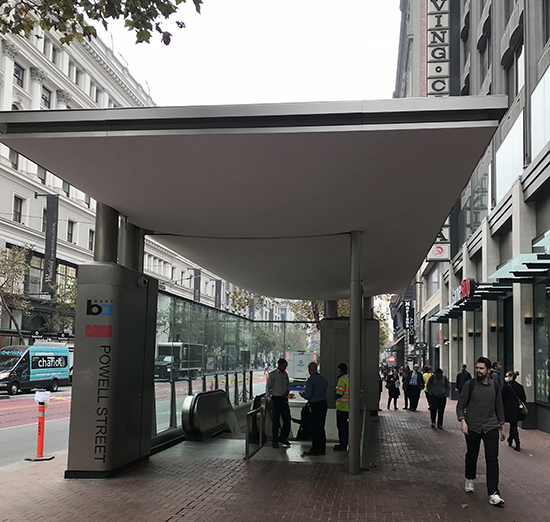 Since Oakland’s 19th St. Station pilot canopy project was completed in 2015, escalator downtime at that entrance has dropped by about 30%. We anticipate similar, significant improvement to escalator performance in downtown San Francisco.

Construction on the remaining 22 canopies is scheduled to be complete in 2025.