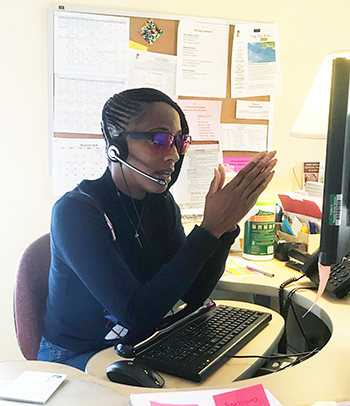 The holiday season can bring added pressure to families already coping with mental health stressors and stigma: A parent may feel they have nowhere to turn when a baby cries inconsolably, joint custody gets strained, or there is no money for a tree, much less presents to put under it.

Family Paths of Oakland, a nonprofit that provides mental health treatment and supportive services to families, can help. BART is raising awareness of Family Paths -- and making the holiday a little easier for its clients -- by choosing Family Paths as beneficiary of the 2018 BART employee Holiday Toy Drive, a yearly tradition of giving back to the communities BART serves.

Started in 1972, the same year that BART began running, Family Paths offers a comprehensive network of services to families, including:

Perhaps the best way to see Family Paths in action is through the eyes of a former client, who has since gone on to a successful career and credits Family Paths in her very survival. Tiffany Rose Naputi Lacsado (pictured a 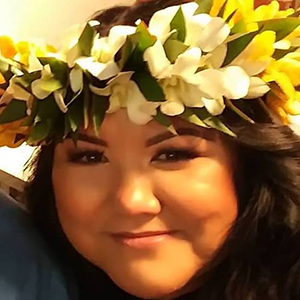 t right) is an Oaklander of Chamorro heritage from the Mariana Islands, who had lived abroad for a few years where she had family support but was mostly on her own when she returned to Oakland raising her infant son.

“I was struggling so much,” Lacsado said. “I was ready to put my baby up for adoption. I honestly did not think I was going to be able to do it.”  Lacsado heard about the Family Paths hotline and gathered the strength to make that first call.

“The woman on the end of the line calmed me down,” Lacsado recalled. “She asked if I was safe, if my baby was safe. He was crying in his crib. She let me know that it was OK to walk outside, to take a breath and collect myself, that he was going to be safe. And not just that, but she called back the next day to follow up with me. I don’t even remember her name but she changed my life.”

An experienced and composed mother now with three children ages 7, 4, and 1, Lacsado went on to earn an MBA and start a worker-owned cooperative business, The Lei Company Cooperative Inc.  The Lei Company is a community of Pacific Islander women working to return the economic benefit of lei to people in the cultures where it originated. The company provides a year-round way for people in the continental U.S. to purchase lei without the shipping costs of importing them.

Family Paths will always be a part of her story. One recent day, Lacsado returned to the Family Paths headquarters building in Oakland to be interviewed, and she took part in a tour of the facility, housed in the historic and beautifully maintained Art Deco-influenced Grove Building on Martin Luther King Jr. Way.

Upon entering the Family Paths office, one can look ahead as lettering on the first entryway features a welcome statement, the second elaborates on the mission, and the third has key words like “respect” and “hope” in multiple languages. Sunshine pours throu 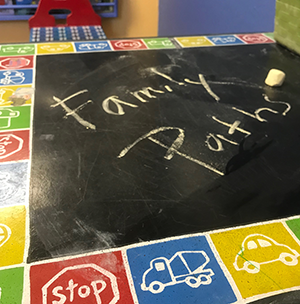 gh the opposite entrance door, a literal and figurative light at the end of a tunnel.

The tour participants kept their distance for confidentiality purposes, essential for such a sensitive program. Therapy rooms have white noise machines outside their doors – at a kids-eye-height, so children themselves can turn them on -- and the building has double-walled doors to ensure that conversations are private.

During a break, Lacsado met a worker who had been taking calls on the hotline. They hugged, an instant connection between someone who had used the service and someone providing it.  “The work you do is so important,” Lacsado told the woman working the phones. “Family Paths saved my life. To this day, I know I could call and somebody would answer.”

In the early 1970s founder Carol Johnston Davis was going through a difficult divorce, isolated and cut off from family, with a young son to raise on her own. “She felt that she would be in danger of harming her son if she didn’t get help, and there were not many resources at the time,” Silver said.

Johnston Davis made a phone call to a friend who lived hundreds of miles away, who talked her through the immediate situation and helped her see she was not a bad person, but a stressed parent who needed support. The experience led her to establish the hotline, which developed into Family Paths and its multitude of services. 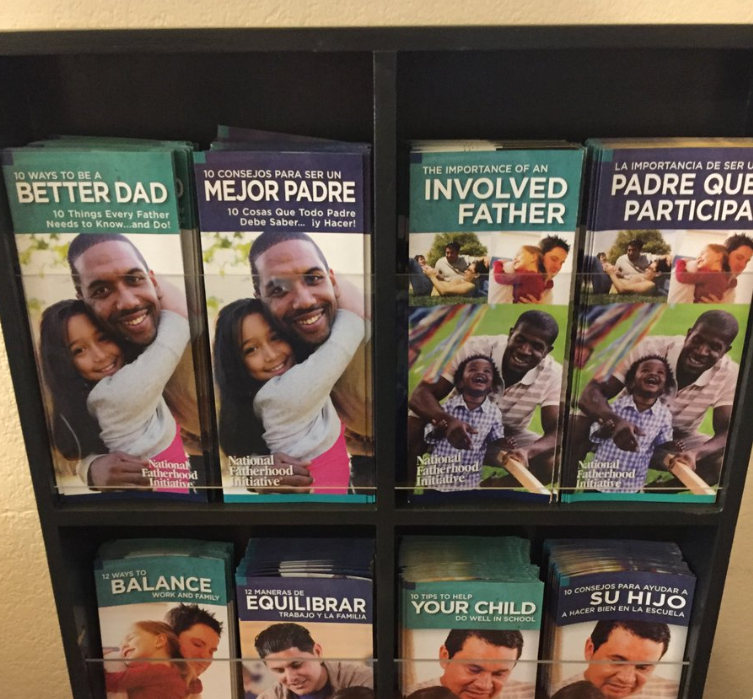 “Sometimes you have to create what you need,” Silver said.

While Family Paths supports any families in Alameda County, regardless of income, their data show that 78% of clients are extremely low income, 9% very low, 4.4% low, 1% median, 1% moderate 2% above moderate and 5% unknown.

Of its expenses, 95% goes directly to programs, 3% to fundraising and 2% to administration/building. Mental health issues do not discriminate by economic status or any other measure, of course, and all families in the county are encouraged to use the services.

What happens when a person calls the hotline? First off, it’s anonymous and non-judgmental. The caller may just want to have a caring person to listen; they may need supplies like diapers or warm clothing; they may want to get into counseling. There are father-specific programs, as well. 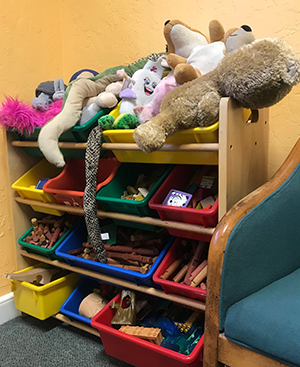 “My experience as a father has been, you’ve got to open up and communicate,” said the 34-year-old Hayward man, who volunteered to be interviewed. He asked not to be identified by name for privacy reasons but said he wanted to speak out "as a black father" specifically.

“We have to break the cycle,” he said. “Just because you’re talking about your issues doesn’t make you less of a man. Sometimes you need somebody just to listen. Family Paths has a great staff, great people, they really listen. They helped me to communicate better with my son. I'm going to be there for him."

He said he would encourage other fathers going through stressful situations with their children to “just call the hotline. Get therapy for yourself or your child. Appreciate what’s good and try to change what’s not.”

Family Paths has an inclusive approach that defines “parent” as anyone who emotionally and physically protects and is raising a child, regardless of biological ties. The organization serves LGBTQIA families, single-parent and foster families and those who are in transition, including those experiencing homelessness, substance abuse or other crises.

Silver said the gifts donated by BART employees may be all a family has to give their children this holiday season.

“Toys are welcome, books in English and Spanish, art supplies, teddy bears, dolls for all races,” she said. “Often we see that a teddy bear or a doll can be important for a child to talk to and have in bed with them at night for security, or in their sleeping bag if they don’t have a bed.”

“It can be the really simple stuff that makes a difference,” she said. 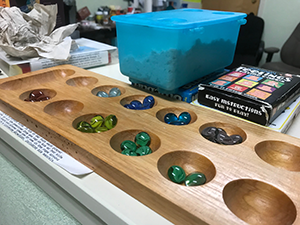 Donated toys were delivered to the organization after a ceremonial presentation at the Dec. 20 BART Board of Directors meeting. Family Paths staff set up a temporary “shopping center” in the building’s conference room, a gorgeous former chapel, and parents received tickets for their number of children, then entered the room to pick out what their child wants.

This system allows the parents the dignity of giving the gift as their own, or from Santa or whatever tradition they observe.

“Every parent wants to make their child happy at the holidays,” Silver said.

AN AMAZING STEP OF COURAGE

“Mental health issues are so stigmatized, that if the parent or the child themselves is struggling, it is an amazing step of courage for them to reach out to us for help,” she said.

“The families we serve have so many other life stressors, from violence to poverty to racism. A safe haven isn’t necessarily there for them. We are thankful to BART for choosing Family Paths this holiday seasons and we know the donations are going to make a difference in a lot of families’ lives.”

For more on Family Paths, or to learn how you can volunteer for the organization or donate directly, visit www.familypaths.org.

Update: More than 500 toys were donated by BART employees for the 2018 Holiday Toy Drive. Representatives from Family Paths joined members of the BART Board of Directors at a ceremonial presentation of the gifts on Thursday, Dec. 20, 2018. BART Police Department staff delivered the toys to the Family Paths headquarters in Oakland. 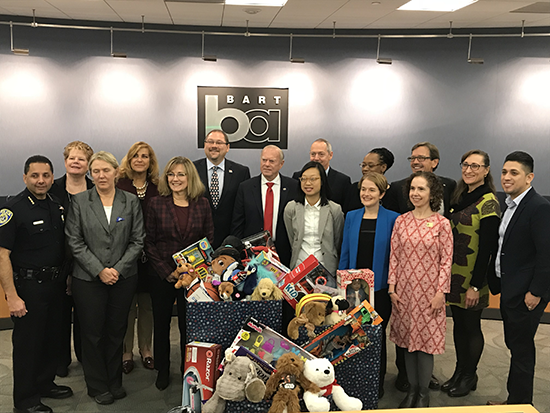