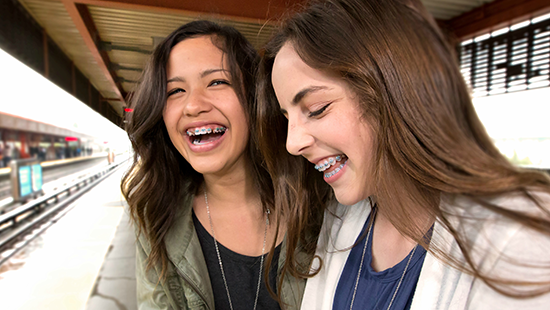 A year after the expansion of a 50% discount to teens aged 13-18, there’s been a whopping 260% increase in total Youth Clipper trips on BART. Don’t miss out on the savings – there's no time better the holiday season and school break for students to get a Youth Clipper or parents to get them as stocking stuffers for teens in your family.

Starting Jan. 1, 2018, the discount that previously only applied to youth age 5-12 was expanded up to age 18.  And youth are taking lots and lots of trips on BART thanks to the big price break.

Since the discount took effect, distribution of free Youth Clipper cards has increased. From January through November 2018, almost 37,000 Youth Clipper cards were distributed across the region, which is a 31% increase compared to the same period in 2017. Although it can't be determined how many cards are going to BART's youth riders, a sizeable portion is likely being used, given the significant increase in BART Youth Clipper trips.

These are serious savings. For example, to ride round trip from 19th Street Oakland to Fruitvale and back would have cost $3.90 for a teen in 2017, but with the Youth Clipper discount, that same teen in 2018 would pay only $2.00 for the round trip ride. The discount does not apply for paper tickets. Kids under 5 still ride for free.

BART did lots of outreach in late 2017 and early 2018 to tell parents and teens about the discount, and visited schools during their summer registration or information days, when kids were signing up for their fall schedules, said Michelle Pallen-Mendiola, Customer Services Assistant. A previous, school-travel-only orange BART paper ticket was replaced by the Youth Clipper, which can be used at any time.

“We worked closely with MTC (the Metropolitan Transportation Commission, which administers the Clipper program) to get the word out,” Pallen-Mendiola said. “Youth Clipper is a great deal for teens. Not only do they get the 50% discount, they can transfer easily between all the different transit systems that take Clipper, like AC Transit or Muni. And they don’t pay the paper ticket surcharge.”

“They can use it up until their 19th birthday,” she said.

Demographics of BART's Youth riders will become available with the 2018 Customer Satisfaction Survey, which will be released sometime in 2019. We do know some info, however, based on current usage. In the morning hours, the top five entry stations for youth are El Cerrito del Norte, Fruitvale, Richmond, Balboa Park and Coliseum. The top five exit stations in the morning include three in downtown San Francisco followed by 19th St./Oakland and Balboa Park. In the afternoon, the most youth entries are at Powell, Downtown Berkeley, 19th St./Oakland, Balboa Park and Civic Center. The top five exit stations are El Cerrito del Norte, Fruitvale, Rockridge, Coliseum and Balboa Park.

Youth Clipper cards are available at many locations, including the Lake Merritt BART Station Customer Service center, or at other locations you can find at www.clippercard.com. You can also download and mail in an application.  In both cases, you’ll need proof of age, such as a birth certificate, passport or California ID.

Applications can be submitted by mail, email or fax.  More info at https://www.clippercard.com/ClipperWeb/discounts/youth.do

We’ve got a how-to video for using Youth Clipper on our website. Check out www.bart.gov/teens to discover fun, new places to explore just a BART ride away.