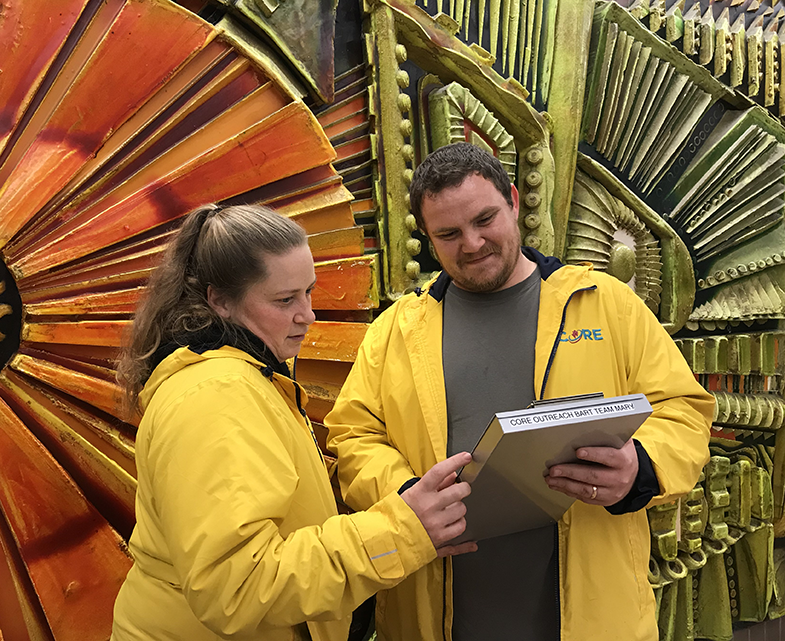 Update: CORE homeless outreach team is already producing positive results. In its first two weeks, CORE made contact with 24 individuals who were willing to talk them, all of which received referrals to available social services. Of the 24, 9 were placed in a county shelter and 13 others were placed in a warming center.

BART’s partnerships with communities to address homelessness got a lift this week when an overnight outreach team began working in Contra Costa County, focusing on end-of-line stations.

This important work is helping to shift homeless people who might be riding trains or sleeping in stations for lack of anywhere else to go, and instead connecting them with services such as clean, warm shelter beds. The result, for customers on the Contra Costa lines, should be a reduction in homelessness on trains and in stations before the peak morning commute rush, and also on late-night trains.  It’s the first week of the pilot program and the team will be putting metrics in place to measure progress.

“This was one of the missing pieces,” said Armando Sandoval, the BART Police Department’s crisis intervention coordinator and community outreach liaison. “Now we have this CORE team supporting my role and providing a direct connection to the Contra Costa Health Services.”  It’s a continuation of the BART Homeless Outreach Program that started in San Francisco in November 2017.

CORE, which stands for Coordinated Outreach, Referral, & Engagement, works to identify, engage, and connect persons experiencing homelessness in Contra Costa to healthcare, social services, and housing. While CORE has always been part of the toolkit for helping homeless people on the BART system in Contra Costa County during daytime hours, the new pilot program that started this week provides for two workers to be dedicated to the BART system every weeknight from 11 pm to 7 am.

“Those are key times because they’re typically when individuals are entering the BART system at the start of the day or on the system without a place to go at the end of the night,” Sandoval said.

This past Monday overnight was the second day of orientation and training for the two contract outreach workers, who spent the shift with Sandoval and two CORE supervisors.  The night began with an introduction to BPD staff at the El Cerrito del Norte substation and an overview of how BPD handles homelessness issues.

“We are really looking forward to working with you,” BPD Sgt. Eric White told the outreach workers. For example, he explained, if a homeless person on a train or in a station decides they want to access services, the CORE team could transport them to a shelter or other facility, which would otherwise take a couple of officers away for hours from already thin staffing.

“Especially when it gets wet and cold, people are more desperate,” White said. “They’re more likely to accept services.”

The team had focused on the Antioch line on Sunday night, then on Monday focused on the Richmond line. At Richmond, they encountered a young man who said he was tired and ready to have a bed for the night. “I’ve not been sleeping so good,” the man said. 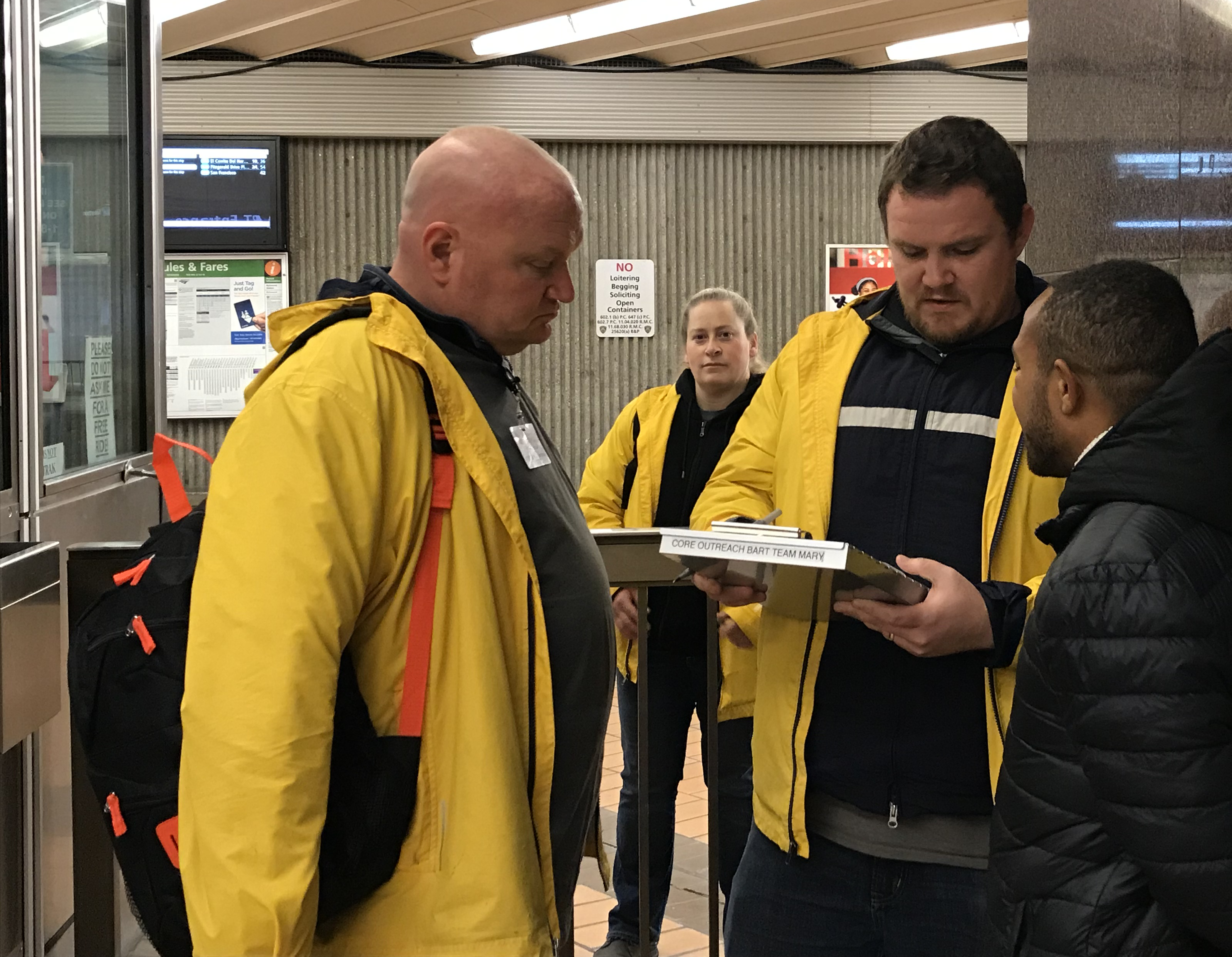 The Station Agent at Richmond, a woman who was familiar with him as a frequent presence in the station, gave him a hug and offered a sincere, “I’m proud of you!” as the outreach workers took his information down on an intake form.

The team transported him to a local homeless shelter in Richmond – a clean, warm building with fliers promoting services like free dental care, meditation classes and therapy groups like Narcotics Anonymous.

The night went on with checks on people who were huddled on cardboard boxes or under flimsy coverings. The team handed out packets with small hygiene items and snacks to those who wanted them. 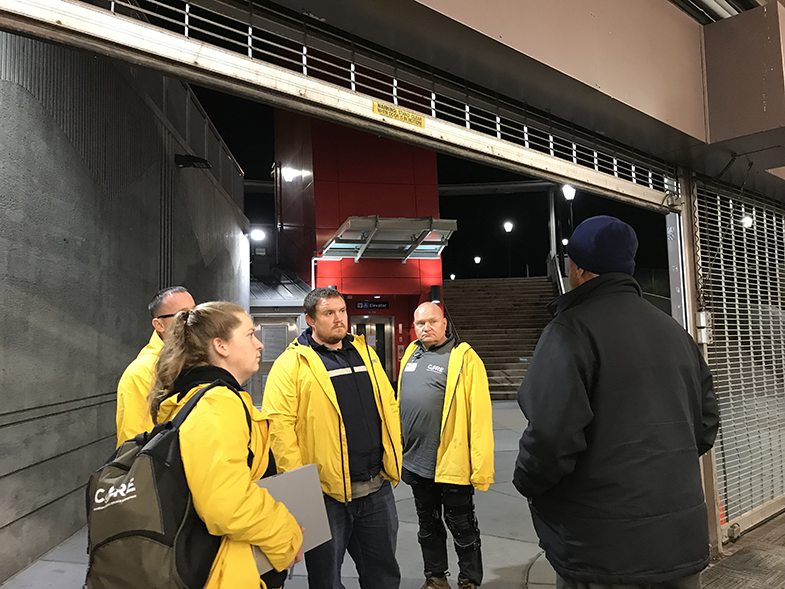 The team also rode trains and walked through end-of-line stations in the early morning hours, making contacts with individuals and asking if they needed help.

“A lot of what we do is building relationships,” said one of the CORE outreach workers, who also has a medical background as an EMT. “We have to keep touching base, keep letting people know that we’ll be here when they are ready to accept services.”

The CORE pilot is funded as part of BART’s $1.6 million allocation to quality-of-life issues under the Fiscal Year 2019 budget that runs through June 30, said Tim Chan, BART’s Group Manager of Station Area Planning. “We’re focusing their efforts overnight on the end of line stations in Contra Costa County, because the end of lines is where we see the greatest need. It’s about intercepting people who are in need of services and redirecting them to where they can get help.”

Besides the targeted programs in San Francisco and now Contra Costa County, Sandoval also collaborates with homeless outreach programs in Alameda and San Mateo Counties. He attends monthly meetings and shares General Manager Grace Crunican’s message that the homelessness crisis transcends borders; that BART is committed to doing its part but needs to work with the communities we serve to really address the problem.

You can read more about what BART’s doing at our Social Resources page.