In 2019, a more systematic focus to modernizing elevators and escalators

In 2019, a more systematic focus to modernizing elevators and escalators

The new year at BART is bringing a more systematic, prioritized focus on a state of good repair for elevators and escalators, the heavy-duty, people-moving machines that BART couldn’t operate without.

“There is a lot of very important work going on,” said Michael Lemon, BART’s Power and Mechanical Superintendent. “We’re moving to a new business model of asset management that is more strategic and working on a dedicated funding stream for critical maintenance.”

New things are coming in 2019: a contract being awarded to replace escalators; the installation of canopies to protect high-use units; and a self-reporting technology pilot program to help make repairs speedier and more efficient, among other improvements.

The BART system has assets of 138 elevators and 175 escalators, spread throughout 48 stations across the Bay Area. The elevators and escalators are made by 14 different companies, some of which have gone out of business. Their preventive, scheduled maintenance, along with unplanned trouble calls 24/7, is handled by a department with just over 40 people.

“Our teams have had to be very creative,” Lemon said, scouring online markets or working with local fabrication shops to rebuild parts no longer being manufactured. “Of course we have to run the trains on time, but at the end of the day, you’ve still got to be able to get people to those trains,” he said. 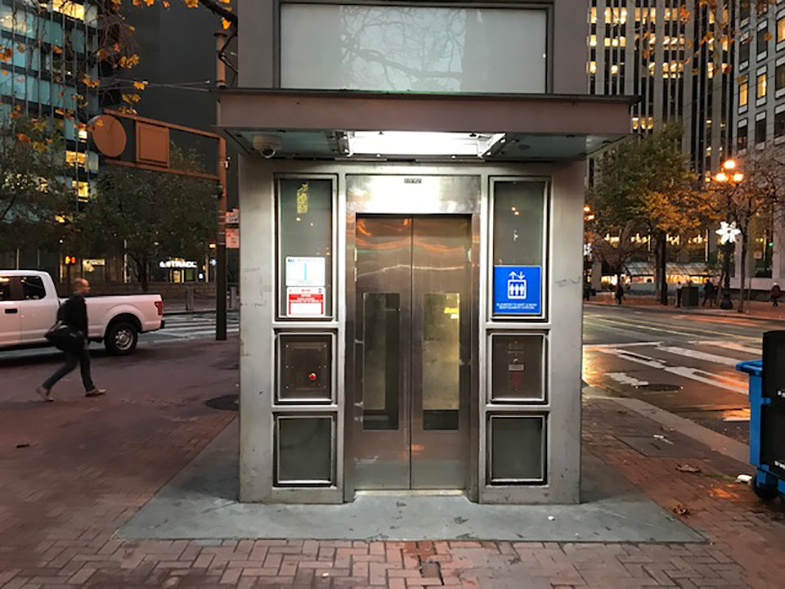 Station elevators, like the one pictured above on Market Street, are the No. 1 priority

Sure, there are stairs. But stairs alone can’t begin to get the job done for 420,000 riders a day, or get it done at all for many people with mobility disabilities. That’s reflected in the daily work of Lemon’s team, which addresses station elevators first and foremost. The team has a 98% availability goal for station elevators and is currently exceeding it; you can track performance at the data portal and read about the master plan for elevator repairs. Lots of improvements are coming to BART elevators.

New technology is also being put into place that will result in quicker and more efficient repairs.  The BART Board in December 2018 awarded a contract to install a Remote Monitoring System on 83 elevator and escalator units at six of the busiest stations. The remote monitoring system is expected to minimize downtime for elevators and escalators by providing technicians -- and the public -- with real-time information when a unit has a problem.

“We’re very excited about the potential for this pilot program,” Lemon said. “In some cases it may even be able to send us a self-diagnosis of what the issue is, so we can send the right technicians with the right tools and parts to get a unit back up and running on the same trip.” 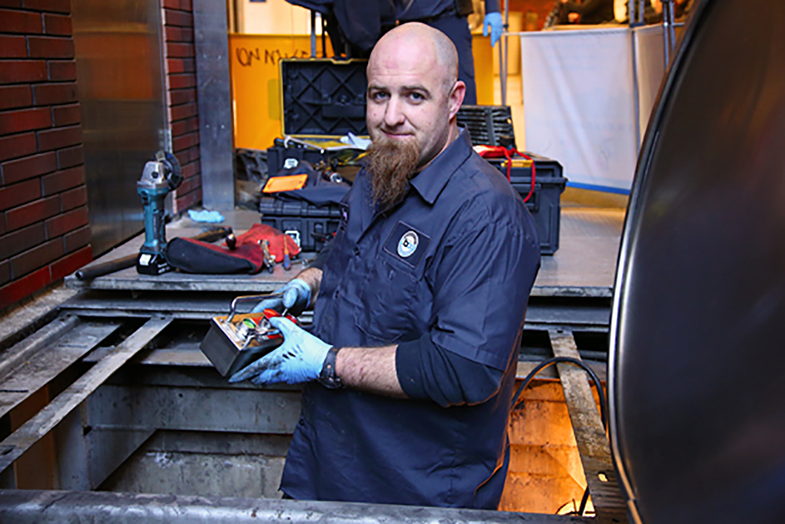 "The No. 2 priority is platform escalators in our busiest stations, which are essential for safety,” Lemon said. One 10-car train can off-board more than 1,000 people at one stop, and at peak commute, trains are coming every few minutes to stations like Embarcadero and Powell.

Without the capacity of escalators, which can carry a large number of people quickly, platforms would become dangerously crowded. The master plan for escalators includes a contract to be awarded in 2019 (aiming for March) that will replace 41 of the worst-performing escalators using funds from the Measure RR infrastructure bond. Escalators take a beating and are complex machines – a single one can have more than 15,000 moving parts.

But help is on the way. The plan is to replace six escalators and six canopies each year, staggering the work among the downtown San Francisco stations so that not all the units at any one station are out at the same time. In 2017, BART began work to overhaul 12 of the worst performing escalators in San Francisco, located at Embarcadero, Montgomery, 16th and 24th Mission stations. This extensive work involves a complete rebuild of the electrical system and takes each unit out of service for multiple months. This repair work is expected to be complete by 2020 and will result in more reliable escalators and access.

“The four downtown San Francisco stations take about 60% of our resources,” Lemon said. “Once we get those downtown elevators and escalators in a state of good repair, we’ll be able to move on and do the rest of what needs to be done.”

HOW THE CREWS GET IT DONE

One recent chilly December day, the overnight repair squad was handing off to the morning crew at the elevator/escalator shop headquarters. At 6:27:22 AM when an Out-of-Service report was generated that would lay out the day's priorities, there were 4 elevators and 12 escalators out of service.

That day, of the 4 out-of-service elevators, 2 were out for a modernization project at Pleasant Hill Station -- if there is ever a "good" outage, that's the kind, for planned maintenance, when there is ample time to ensure redundancy if possible, put out bulletins notifying riders, and when the ultimate outcome will be a more modern, reliable customer experience – a solid improvement worth the inconvenience.

The other 2 were unscheduled but quick fixes. One was in a parking garage elevator (vandals had cut the cord on the emergency phone); the other was a station elevator getting one last load-test before going back into operation after a minor repair.

Then there were the escalators. On this recent morning, the 12 out-of-service escalators included two that were undergoing planned maintenance -- one street-level at Embarcadero for a controller renovation; another was platform-level at Coliseum for an earthquake retrofit.

“We have an enormous backlog of needed repairs that we are systematically working our way through,” Lemon said, a backlog that is exacerbated by difficulty in finding parts for obsolete models and also in hiring amid a booming construction economy that give technicians their pick of jobs.

“We’re still using 45-year-old equipment on a majority of our escalators,” Lemon said -- 77% date to the original machines installed a generation ago. Ideally, public transit elevators and escalators operating within this capacity, in such an harsh environment, should receive a scheduled schematic planned phased renovation every 15 to 20 years.  Full replacement of each elevator and escalator should be accomplished within 40 to 45 years.

Hiring technicians is as challenging as finding equipment. A full head count for Lemon’s department would be about 50. Some hires are in the pipeline, but looming retirements will create attrition and the need for more hiring.

BART is competing for technicians who have their pick of jobs. The applicants may be choosing between working days on a gleaming brand-new luxury high-rise,or spending graveyard shift in an underground pit in a BART station. 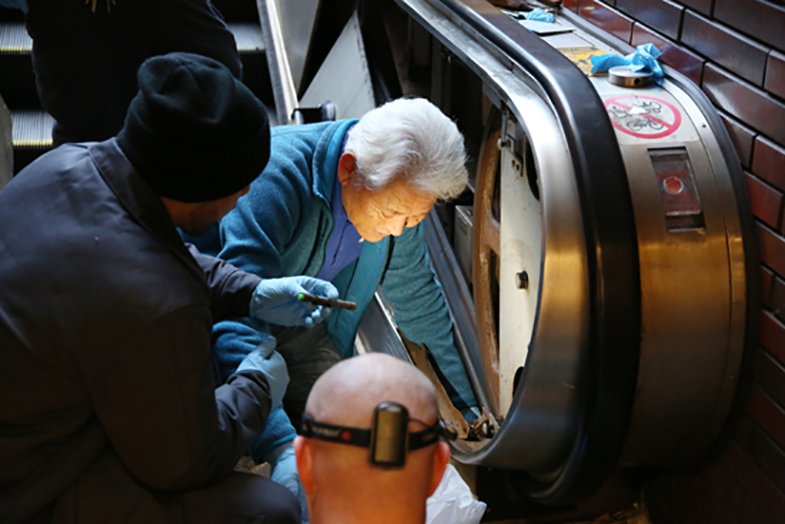 Trainers like Sam Whang, pictured above in blue sweater, teach the next generation.

But BART isn’t sitting by idly. We’re actively recruiting technicians (you can find listings at www.bart.gov/jobs) and we support our technicians’ on-the-job career development to move toward licensure and upward mobility.

Improved technology like the remote monitoring system makes BART a more attractive career destination for technicians such as Martin Montoya, who was hired in late 2018.

“I’ve always had a drive to want to learn, to have new and different experiences,” Montoya said. “I grew up here in the Bay Area, so I’ve been around BART all my life. I’ve seen how hard it is for the public when the elevators or escalators or out of service. I’m glad I can be a part of making the system better for the future.”

With new team members, new technology and a new and more systematic maintenance plan, 2019 is shaping up to be a big year for improvements to BART elevators and escalators.

Want to get updates when BART elevators or escalators are out of service? Visit www.bart.gov/alerts to sign up for advisories and also for general news about BART. You can watch a video of our elevator/escalator crews at work on our YouTube channel.