BART gears up for pivotal project to strengthen the Transbay Tube

BART gears up for pivotal project to strengthen the Transbay Tube

Never was BART’s role in the region as a lifeline made clearer than the 1989 Loma Prieta earthquake. BART was up and running on a 24-hour emergency schedule to serve the public less than 12 hours after the quake hit.  It was a watershed event, showcasing infrastructure working for the greater good of the region that paid to build it. 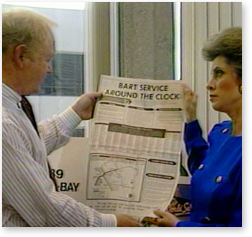 Loma Prieta was centered 55 miles south of San Francisco.  Our entire system, including the Transbay Tube, withstood the shaking. The operator at the helm of the train traveling through the tube the moment the quake hit reported she didn’t even feel the temblor. The design and strength of the tube, an engineering marvel sunk into a trench on the bottom of the Bay, had insulated the train and its passengers from feeling the ground’s movements.

Fast forward more than a decade to the early 2000’s: BART began to prepare for a major earthquake that could be centered closer to our core system.  On November 2, 2004, voters in Contra Costa, San Francisco and Alameda counties approved Measure AA, which allowed BART to issue general obligation bonds to fund up to $980 million of the $1.2 billion total cost of earthquake safety improvements.

The highest priority for upgrades has been the Transbay Tube, the very core of the BART system.

BART worked with earthquake retrofit specialists using a combination of geotechnical and structural site investigations, computer simulations, and testing of materials and models to develop the strengthening game plan.  Testing was performed locally at U.C. Berkeley before making the final determination of waterproofing techniques.

Significant work is already complete including flexible seismic joints and structural upgrades to portions of the tube.  The next phase begins this year.  Our February 11 schedule change, consisting of a 5 am opening and single tracking through the tube after 9pm, allows us to accomplish what needs to get done.

Make no mistake, the tube is structurally sound. But we are preparing for a rare and devastating earthquake- defined as a 1,000 year event- something that happens once every thousand years.  In an event this large, the tube won’t fail but it could crack and leak.

The retrofit we are about to carry out will install an inner steel lining to key sections of the 3.6-mile-long tube and an upgraded pumping system to allow larger quantities of water to be removed quickly from the tube. 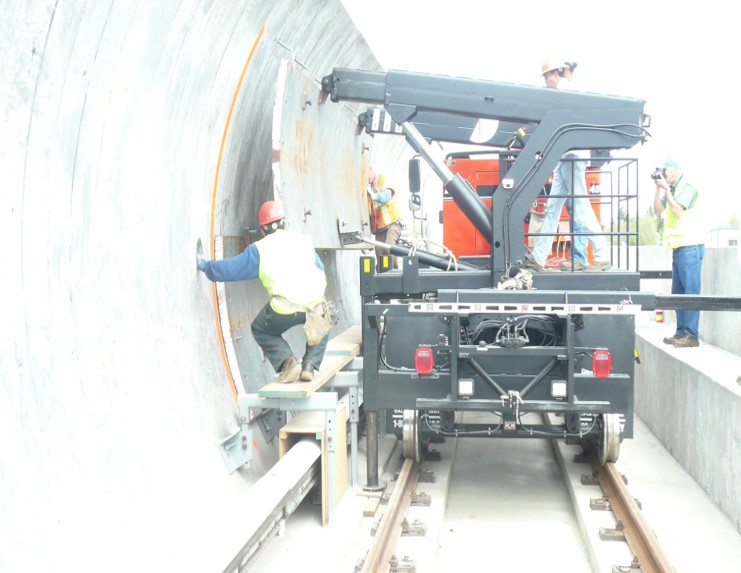 (Steel liner plate handling machine similar to what BART will use)

A plate handling machine will maneuver sections of curved steel plates to form archways inside the tube. Once put in place they will be welded together and bolted into place. Grout will then be used to adhere the steel plates to the concrete walls.

A different technique using a polymer product covered with concrete will be used under the tracks.

The retrofit will be done in small sections during a work window of 9:30pm (Sunday-Thursday) until 5:00 am (Monday-Friday).  Preliminary work has already begun and will ramp up February 11, when the schedule change will free up one bore of the tube after 9pm each weeknight.

Then later this year, a crew of more than 100 workers will bring equipment and materials into and out of the tube via an 800-foot long custom-built locomotive work train each night.  Be sure to wave at them if you are on the West Oakland platform as they head into the tube around 9pm. Passenger trains will need to single track through the tube during this work, resulting in 24-minute headways after 9pm on weeknights (extra trains will be provided on Friday nights).

While many in the Bay Area will be sleeping, this crew will be setting up an entire work area and then breaking it down each night to be ready for passenger trains at 5 am.

Safety checks will be done before the Transbay Tube work zone is released to passenger service.

Opening an hour later extends the available work window by at least 20% and saves the project a minimum of $15 million, shortening the project timeline by at least 4 months. The extra hour also gives BART crews across the system more wrench time to rebuild the system using Measure RR funds.

The Transbay Tube work and the related service impacts are expected to be complete in Fall 2023. 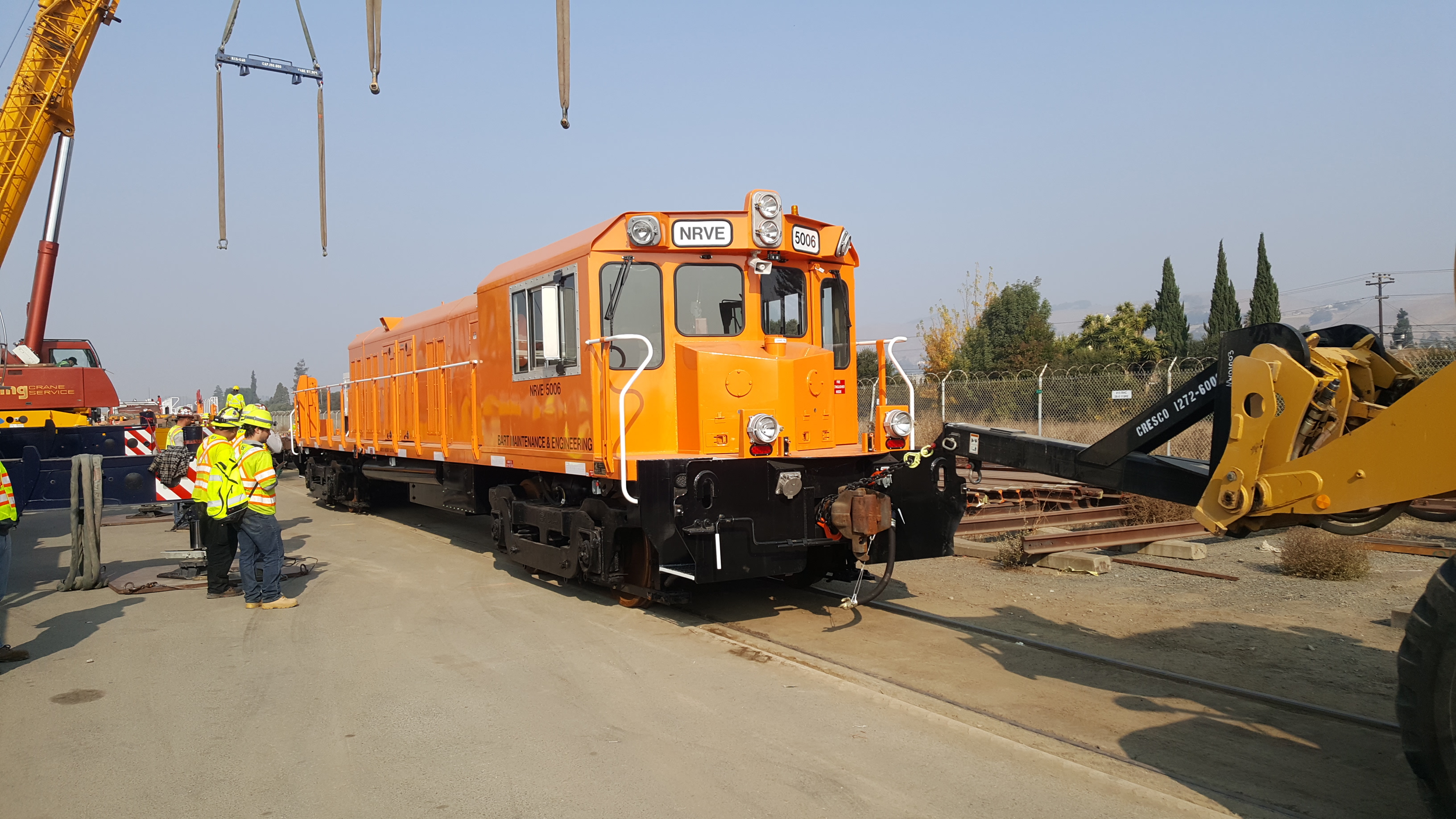 The work train is a critical component of the project.  It is made up of three new RELCO clean diesel locomotives and 14 flat cars, with each flat car configured for a specific task. The locomotives will bookend the consist, with the third locomotive in the middle. The work train was designed and fabricated at the RELCO facility in Iowa, specifically to operate on BART gauge rail.

The components of the work train are being delivered to BART’s Hayward Shops.  It will begin operations in spring out of the Oakland Shops. It will travel through Lake Merritt and stop at West Oakland Station to pick up the works crew before heading into the tube.

Its typical maximum speed is 15 miles per hour, but it will run through switches at five-miles-per-hour or less. It is anticipated the trip into the tube will take approximately an hour. 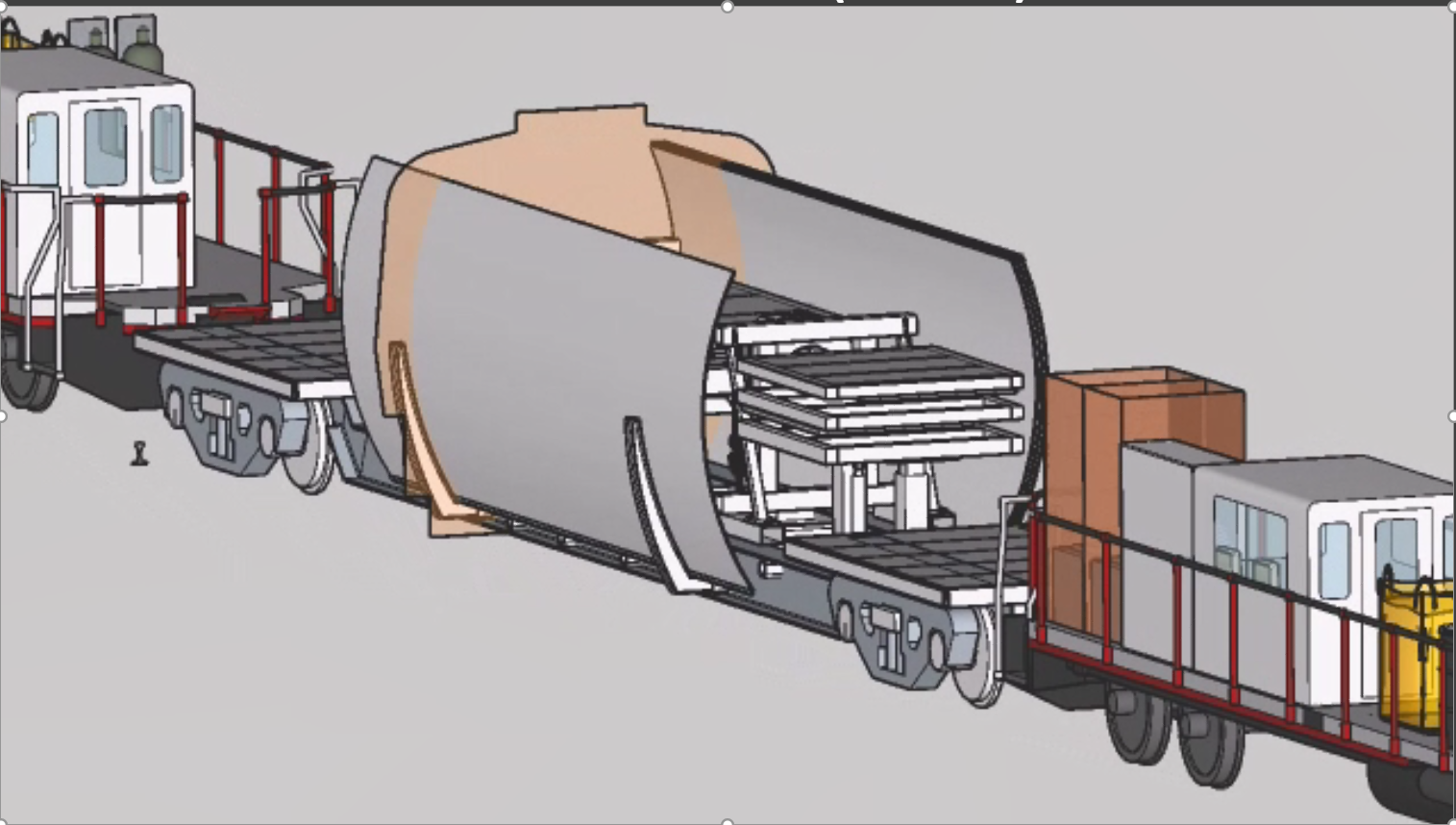 (Rendering of steel plate on the work train)