For nearly 70 years the National Society of Professional Engineers has held a National Engineering Week to increase interest in engineering careers and attract a diverse and well-educated engineering workforce. This year, we’re observing National Engineering Week from Feb. 17-23, 2019, with a look at three BART engineers who took different career paths to success. We’ll look at some of the projects they work on and ask about their successes and challenges along the way. We're also in the process of hiring more than 100 new engineers -- you'll find featured positions at the end of this article and a full list of jobs at www.bart.gov/jobs

As a boy Salvador Marquez, pictured at right,  liked taking his toys apart and putting them back together as much as playing with them as intended – surely the hallmark of a budding engineer. As an adult, Marquez worked a few years in the construction engineering and aerospace industries before joining BART, enough to know he would like a different kind of challenge.

Asked about the reputation that government agency work might be slow-paced or dull compared to the private sector, he said, to the contrary, “BART is so large and has so many different kinds of jobs, you always have a new challenge, a new problem to solve. It’s actually very interesting work. I can be doing something new and different every day."

Marquez was on one of his field work visits recently, at a part of Orinda Station the public never sees – the guts of the underground substation that powers the motors of BART trains. A bystander could hear a steady whining sound, which is a good thing, meaning all the components are working correctly to ensure an uninterrupted flow of electricity. Marquez used a tool called an oscilloscope to check a negative grounding device that helps ensure that patrons are protected from any electrical hazards on the tracks.

“There are so many things you can learn here at BART,” said Marquez, who visits all the substations to do safety checks such as these, among other projects. “There’s a lot of support from the team, which makes it a good place to work and to learn new things.”

He gave a look to the rectifiers as well, devices that help trains get power. They work sort of like a phone charger, converting the alternating current provided by the electric company to the direct current that our trains use. The Traction Power Department last year discovered during routine maintenance that a rectifier was in danger of ailing and sprang into action to swap out dozens of components. There was no interruption of service due to the quick work of engineers like Marquez.

Renovation of critical electrical equipment, including rectifiers, is paid for by Measure RR, the bond measure that’s providing the money we need to rebuild. “Thanks to RR there is a lot that we are doing to improve the system,” Marquez said.  "I would encourage anyone in engineering to look at the jobs available at BART and consider joining our team."

Linda Lee, pictured at right,  is a Principal Civil Engineer who was always interested in math and science. “I had a love for seeing how things get built,” says Lee, who as a college student 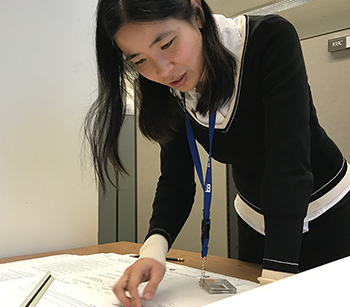 took part in the annual “concrete canoe” competition, which is just what it sounds like. College students put their engineering skills to work in an advanced form of concrete construction and racing technique known as the “America’s Cup of Civil Engineering.”

Lee went on to gain several years of experience in highway design, on land development issues and consulting on rail transit, including working as a contractor for BART on projects like seismic safety at the Warm Springs extension station.

Ultimately, she decided to work for BART as am employee to be able to have a broad portfolio of projects that she could follow through from start to finish, a more satisfying result to her than the dipping in and out that consulting allowed – and without the focus on billable hours.

“I am able to have a real sense of responsibility and ownership” for the projects I work on at BART, Lee said. Her portfolio includes fencing that keeps patrons and employees safe around work areas such as Measure RR rebuilding projects; an annual tree survey that identifies trees for removal based on risks of their condition; and assessing condition of signage used by workers internally.

Lee’s people skills and diplomacy come in handy as well. In early February, she went on a site visit to where new fencing is going to be installed for greater safety and security around the Richmond maintenance yard. She set up a meeting with a next-door property owner and on-site manager for a mobile home park that will need to move some of the residents’ parking spots along BART property so that construction crews can do their work on the new fencing.

“It’s a good mix” that balances working independently along with working in teams when needed, Lee said. She’s also found that BART, with a higher percentage of women in engineering jobs than is typical industrywide, is a welcoming place to be a woman engineer.

“BART makes it a priority to ensure diversity, not only with gender and race but with different kinds of backgrounds of engineering,” she said.

Lee also mentioned internal leadership and career development programs as making BART an attractive place to work. She’s currently attending a program through the Mineta Transportation Institute to earn her master’s degree in Transportation Management. BART offers many opportunities for mentorship and career advancement, both informal and formal, including in in-house leadership academy and a tuition reimbursement program.

Balvir Thind, pictured at right inspecting a new uninterruptible power supply set-up at 19th St./Oakland Station, is a Principal Electrical Engineer who has been at BART for 23-plus years and has seen firsthand the ability to change career paths and find upward mobility.

Thind had been fascinated by engineering technology since a young age and was building his own home-grown electronic circuit boards from the time he was in high school.

Thind worked in different jobs including as a design engineer and as a power supply engineer before he was hired at BART as a train electronics technician. “It was a very interesting place to start at BART because I had a chance to do troubleshooting and learn all about

the trains,” he said.

He set his sights on an electrical engineering job and moved up the ranks until he attained it. Now, he has a broad base of projects which range from overseeing emergency lighting to troubleshooting equipment like fans and pumps to – and this will be a huge one – acting as project manager for a Tunnel lighting project in the Transbay Tube. That’s just one of the Measure RR improvements that will be happening during the period when BART is shifting its opening time to 5 am.

Thind also finds time to mentor junior engineers and engineering interns. He’s keenly aware that with a wave of Baby Boomer retirements looming, a new generation is needed to step up and ensure BART keeps thriving through its second half-century.

“I make sure they get hands-on work to bring their confidence up,” he said. “They bring us new ideas. I learn as much from them as they do from me.”

Ever the troubleshooter, Thind returned to his train technician roots one day in early 2019 when he was on a train whose door was stuck open during a busy commute. He could see the other passengers frustrated because the likelihood of a substantial delay was mounting.

With his trained eye he noticed that someone's AAA battery had rolled into the door track, and was blocking the door from closing. He reached down, popped it out, and the door closed, allow the train to start moving right away.

The passengers, who didn’t realize he worked for BART, cheered. Thind, modestly, didn’t want any credit. “I was glad to be moving again just like they were,” he said. “I just happened to know how to fix it.”

The BART Maintenance and Engineering Department has more than 100 openings at the moment, including the featured jobs listed below. Find the full list at www.bart.gov/jobs