How a Quality Management System brings you a cleaner train

How a Quality Management System brings you a cleaner train 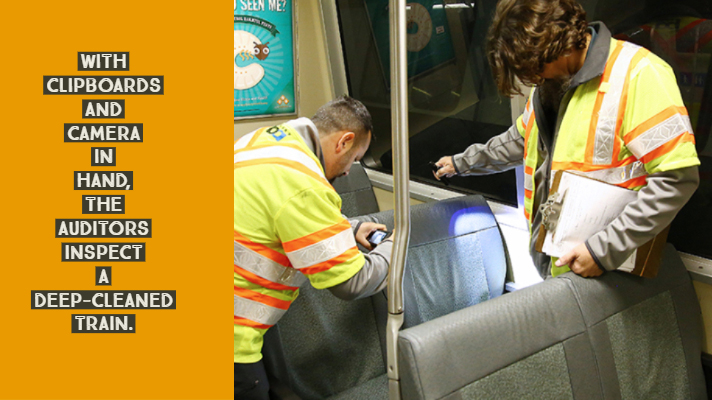 As they combed a just-cleaned train car, Clark Hubanks and Dominic Cisneros could have been mistaken for detectives. With experienced eyes, they spotted a tiny tear in a seat cover and a wad of gum stuck to the bottom of a seat.

They shined flashlights into nooks and crannies, crouched under seats to check for trash, and, with cameras and clipboards in hand, documented everything wrong – and right – about the deep-cleaning of Car #1276. Hubanks and Cisneros are two of six Quality Assurance Officers whose job it is to audit processes within BART's Rolling Stock & Shops (RS&S) department, basically, trains and their maintenance. Tonight they are auditing a process known as a “thorough clean,” which each train car gets every 90 days. On another day, they might audit machinery or documentation or even an outside vendor who is selling bumpers to BART.

Such audits are a requirement under ISO 9001:2015 Certification, a wonky-sounding name that means, simply, that RS&S has put in place a Quality Management System that lives up to the International Standards Organization’s high bar. “We’ve turned the pressure up on ourselves,” says Hubanks, a wiry, thoughtful man who has roughnecked in oil fields, fixed planes for airlines and, some 24 years ago, arrived at BART as a train car technician. “ISO certification is a concrete way to show our commitment to customer service.” 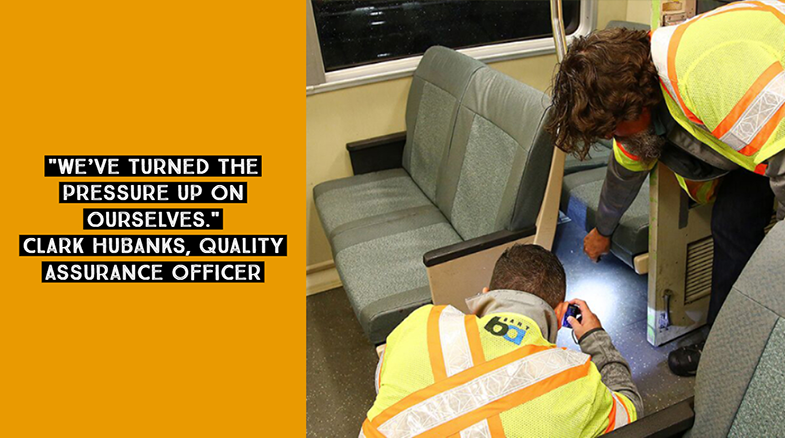 Indeed, very few transit agencies in the United States have obtained the ISO certification, and only a handful worldwide. It takes years of preparation and extensive documentation of policies, procedures and processes. RS&S, with a $138 million operating budget and 826 FTE positions, is responsible for all engineering, maintenance and operations support functions for BART’s rail car fleet.

ISO and other process-management programs are aimed at improving quality and reducing errors by standardizing processes. In many industries, such as health care and manufacturing, certification may be strictly mandated for compliance, or necessary for competitive advantage. “We are voluntarily opening ourselves up” to an outside credentialing body, Hubanks said. 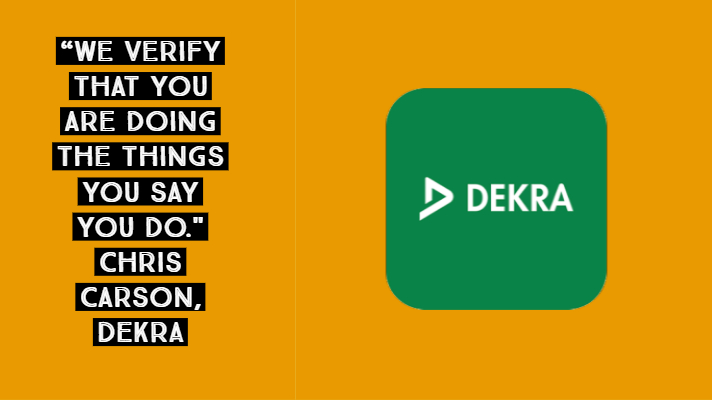 Different companies provide ISO certification; the one that certified BART is DEKRA. “We’re one of the largest companies globally that do independent third-party verification,” said Chris Carson, Senior Director of Auditing and Business Operations for DEKRA North America. “We verify that you are doing the things that you say you do. As far as public transportation agencies, that’s pretty rare.”

“For a lot of industries, it’s required for compliance,” Carson said. “But at BART, it’s not something you have to do. People aren’t going to start or stop riding trains because you have an ISO certification. It’s just an extra step in saying, we’re trying to use tools that are out there to improve. We’re not just talking the talk, we’re walking the walk.” The DEKRA certification for RS&S lasts for three years; at which point, the process begins again. “What’s notable is that BART is choosing to pursue the certification based on your own commitment to improve” Carson said.

The auditors must have an encyclopedic knowledge of the standards required; Hubanks and Cisneros have it down to a science as they move through the thorough-clean audits. Cisneros is a newer BART employee, who also had experience in the aviation industry, and he goes about his work with a bounce in his step, even on graveyard shift. 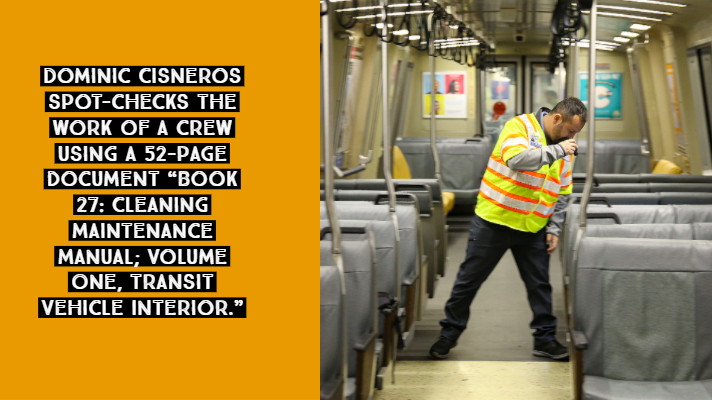 They’re using a 52-page document “Book 27: Cleaning Maintenance Manual; Volume One, Transit Vehicle Interior.” The process for thorough-cleaning must be fully documented, so cleaners know what is expected for each task and how to do it safely and effectively. The manual has descriptions and even photographs for the proper way to mop, sweep, and safely handle biohazards like needles. Train cars undergo routine cleaning every night – picking up trash, wiping down obvious messes – but the “thorough clean” takes hours. On this night, two train cars have been thorough-cleaned, and the auditors are giving them the white-glove treatment. The first thing the layperson notices entering a just thorough-cleaned train is the smell – or lack thereof. You don’t smell harsh chemicals; you don’t smell urine or spilled beer; it just smells clean. The floors are swept bare and mopped of gunk; there’s no visible graffiti or even smudges on the windows.

Hubanks and Cisneros, however, have practiced eyes. They notice some stubborn spots of what appears to be gum residue. The manual -- Page 13, Task 5: “Remove Gum” -- illustrates how to loosen the spots with gum remover and scrape it up with a gum stick. There’s a similar process for every step in cleaning the entire train car. Every audit produces findings, and this one will be left open until managers can work with their teams to fix the gum problem. 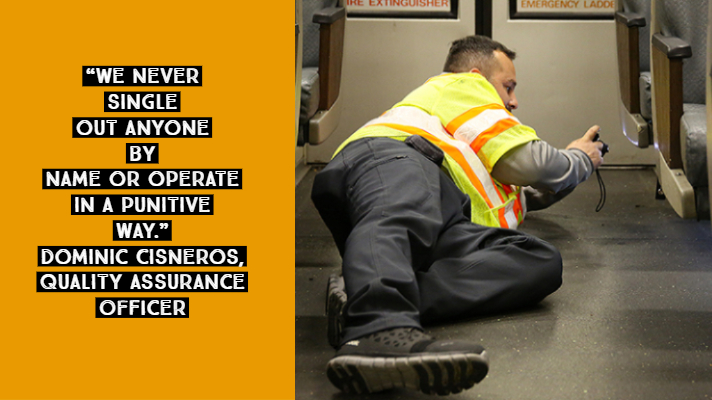 “We never single anyone out by name or operate in a punitive way,” Cisneros said. They want a spirit of collaboration and commitment to improvement that benefits everyone and ultimately provides the best customer service. The manager has leeway to solve the problem in her or his own way.

At each monthly Quality Management Systems (QMS) Review meeting, managers are called to account for how many audits remain open in the areas they oversee. Dave Hardt, the Chief Mechanical Officer of RS&S and widely considered an architect of RS&S’s ISO certification, calls the meeting to order by literally reading the Quality Policy out loud. It has the feel of a pledge of allegiance, a solemn vow. There’s a “Review of Quality Objectives” for things riders care deeply about – such as “Increase Mean Time Between System Delays” (you might know it, more colloquially, as "How Often My Train Is Late").

Graphs show the results of audits (a minimum of eight audits per month are done) and the status of any corrective action reports. Bar charts show at a glance how each yard is doing. The auditors emphasize that any one audit is simply a snapshot in time, but let those snapshots pile up, and someone at the next QMS meeting will have some explaining to do. Auditors like Hubanks and Cisneros have a laser focus on auditing; they’re not in the manager meeting and maintain an arms-length independence. But they’re keenly aware of the impact of their work.

Without these clear standards, Hubanks colorfully explains, achieving consistency in quality would be “like trying to roll a wet noodle up a hill.” BART is in good company with its ISO certification; another transit agency to have it is the Beijing Mass Transit Railway. “Support from senior management is important,” said Ken Chan, Head of Corporate Governance for Beijing MTR Co. Ltd. “This is a good tool to foster a culture of quality improvement in terms of process, system and management … that in turn brings a good experience to customers.” 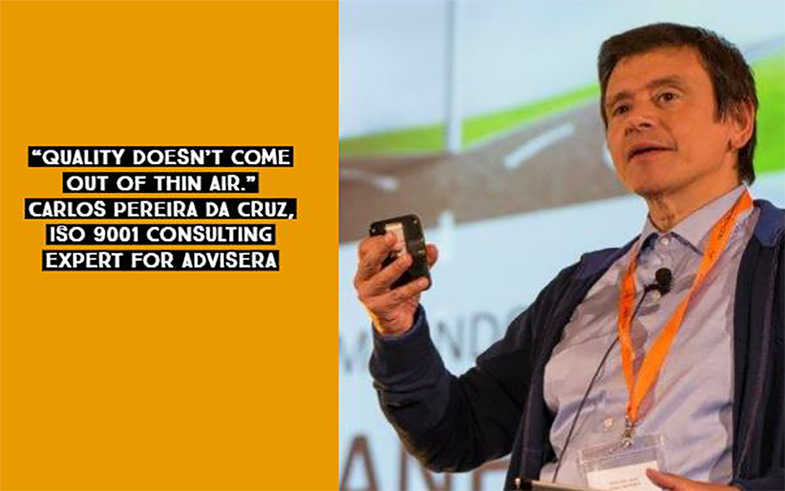 Carlos Pereira da Cruz is an ISO 9001 consulting expert for Advisera, a company that calls itself the world’s leading provider of online training and documentation for ISO 9001 and other standards, with customers in more than 100 countries worldwide. Pereira da Cruz, who has more than 30 years of experience as an auditor, consultant and trainer and is Advisera’s expert in ISO 9001, said BART’s certification is laudable _ and unusual for a public agency.

“Quality doesn’t come out of thin air,” he said. “It’s the result of an organization’s systems and processes. With this certification you are telling your customers, ‘We want to be better. We want to serve you better. We know we are not perfect but we are constantly working to improve.” One of the requirements of the ISO 9001 certification is that everyone involved knows the quality policy: RS&S supports that goal by displaying the policy on plaques on the wall, banners hung from the shop ceiling and trinkets like mugs with the policy embossed upon them. 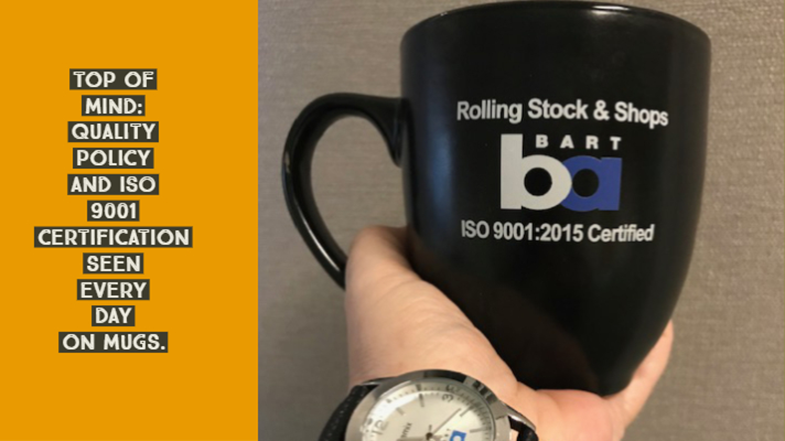 They are symbolic but also a very visible reminder that the RS&S department is run, in a manner of speaking, as a tight ship.

“The certification shows the  organization’s commitment to its customers and stakeholders that it can provide products and services of good quality,” Pereira da Cruz said. “And it shows that the organization will take the feedback it gets and use it as a tool for improvement.”

At the most recent QMS review in March the team went over concerns large and small: Which train cars are repeatedly having problems, to be classified as “bad actors” and put in line first for decommissioning as more Fleet of the Future cars arrive? How is the HVAC performing as we approach warmer weather and reports of hot cars? How is the average on-time rating compared with months past? Hardt, leading the meeting, brought each topic back around to the central questions of: How are we doing? How could we be doing better?

“We are benchmarking ourselves against other transit agencies around the world,” he said, “to become a world-class organization. We should be able to hold ourselves to a higher standard.”

For some of the categories, managers explained why a rating was low or a corrective action report remained open on a particular problem. It took the form of a Socratic method; a dialogue based on asking and answering questions to spur critical thinking and arrive at the best solutions to problems.

“This conversation is good, it’s healthy, it’s what you expect when you’re trying to make a culture change,” Hardt said. “We are kicking it up a notch.”