When new Fleet of the Future train cars are delivered to BART property, they don't start carrying passengers right away. Instead, they first must undergo a series of tests to make sure they perform to specifications for safety, performance and longevity.

Some 70 cars have completed their on-site acceptance testing and are carrying passengers – enough for four 10-car trains to be in regular service and the rest used to  provide crucial training for operators and maintenance workers.

By the end of April, BART expects to hit a milestone with 80 new train cars, enabling one 10-car Fleet of the Future train to be running on each of BART’s five lines, with the rest still undergoing testing and being used for training. 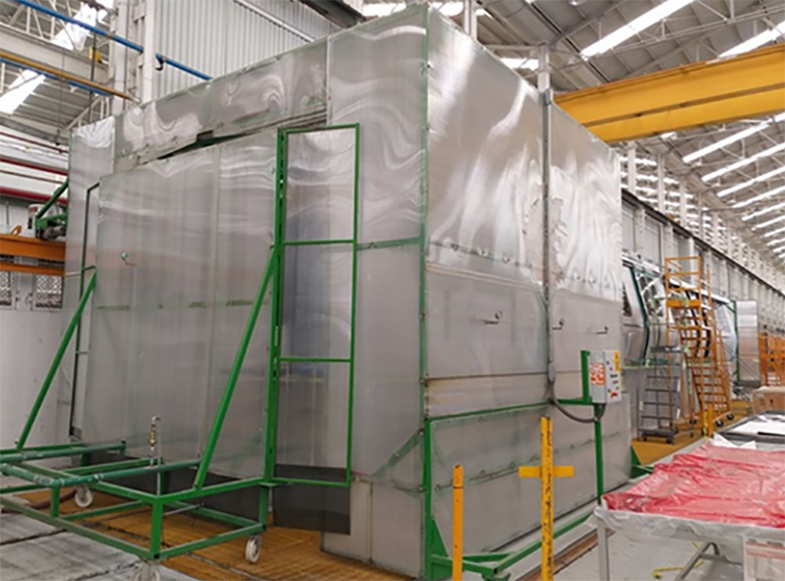 In image above, a train car goes though a water test to check for any leakage

Several cars are in transit being trucked across the country and more are in final assembly and testing at manufacturer Bombardier's test facility in Plattsburgh, N.Y.  New train cars don’t get their clearance to carry passengers until they have been tested on-site at the BART test track in Hayward.

“When we do testing here, if we find things that require them to make changes in production, we can do that easily,” said Henry Kolesar, Group Manager for Vehicle Maintenance Engineering. “We have a good rapport with Bombardier.”

As an example, Kolesar noted that some of the first cars to be tested turned out to be running too cold. “When there’s any kind of technical issue, we keep that issue open until it can be resolved,” he said. “This just took a software modification to the HVAC system, and then it worked properly.”

There are various forms of testing routinely required by BART in specifications, such as environmental testing (running the equipment under temperature extremes), shock and vibration testing (shaking the equipment while it’s operating), and performance testing (measuring acceleration and braking rates, or cooling capacity).

Testing complexity can vary depending on what equipment is being tested. Many suppliers have the capability of testing subassemblies in their own labs, while others rely on commercial testing facilities to fulfill their needs. Some other testing, like that performed on a complete car body, require unique set-ups and special facilities.

Take, for example, the issue of door operation. Doors failing to open disrupt passenger flow and delay train departures. Doors failing to close stop the train completely. With the new BART vehicles having three doors on each side, the doors needed to be far more reliable than those on the legacy fleet. 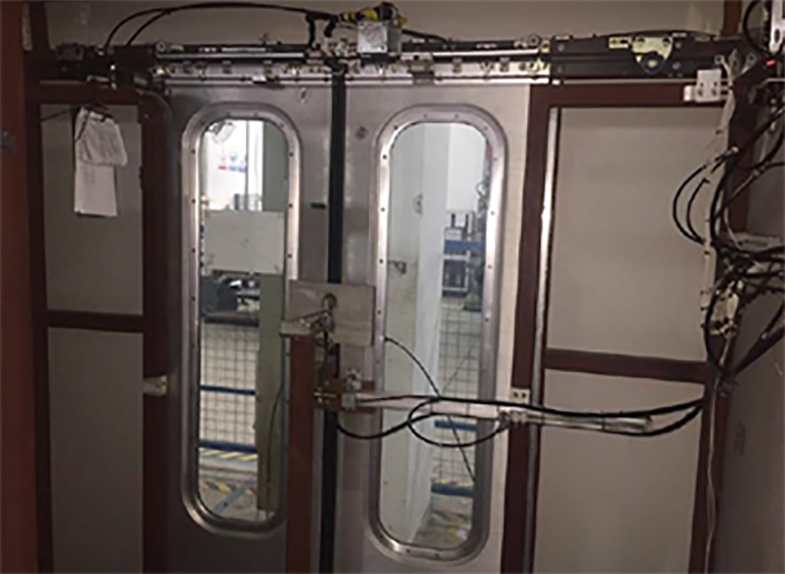 Image above: A complete door assembly has been built including actuators to simulate passenger blockage in door testing.

To ensure that the doors would provide reliable operation, under real-life conditions, the specification required that the doors undergo a life-cycle test of “at least 1.5 million cycles” including passenger issues such as obstructions -- like backpacks that get stuck in doors -- or intentional holding the doors open, which can cause them to fail.

A test rig of a complete door assembly was built including actuators to simulate passenger blockage during operation. The rig was set up outside so that it would experience temperature extremes. Automated equipment monitored operation and counted the cycles. The new arrivals were examined after 1.5 million open-and-close cycles and no abnormal wear was found.

Then there's the "truck." BART train cars roll on wheels and axles in an assembly called the truck. At BART each vehicle currently sees over 115,000 miles of travel per year involving a substantial amount of wear and tear.

In the industry, trucks have been known to put several companies out of business. They are big. They are heavy. They are expensive. Truck failures can ground a railroad. With this in mind, the BART vehicle specification was written with a requirement that the truck “design life shall be taken as 10 million cycles.”

There are few facilities in the world capable of applying stresses to such a large and heavy assembly. In the case of the BART truck test, a failure appeared in the truck before the 10 million cycles were met. As it turns out, the failure was a result of the fixturing being used to hold the massive assembly in place, and not due to a flaw in the design. The fixturing was corrected, and the test was started over, from the beginning. The rig, and the truck assembly, have since passed the specified 10 million cycles, but the supplier has decided to continue testing, possibly until a failure occurs, or for another 2 million cycles, whichever comes first.

Furthermore, the air compressor is a good example of a component assembly that has required modifications. Because the car sits up on air bags, for leveling at station platforms and for a smooth ride, compressed air is needed on the cars. Constant cycling of most any equipment tends to wear it out quickly, and an air compressor is no exception. 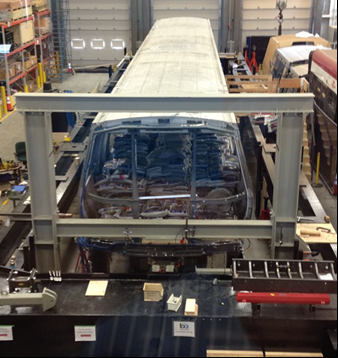 Above, a testing setup for checking the structural integrity of the car body shell

The Fleet of the Future specification has a requirement that states a life-cycle test shall verify the compressor provides “fault free operation for five years when operating at the defined Duty Cycle.” This is clearly not an overnight test. In fact, actual air compressor life cycle testing began on August 3, 2015, and is scheduled to run until March 3, 2020. The latest interim report has indicated no hardware failures to date.

Some of the new train cars are also set aside for training. It's important to use Fleet of the Future trains in certifying train operators to be able to drive them, as many features are different from the legacy cars. So far, 313 employees have completed New Car General Familiarization training, and 130 employees have completed the Introduction to Train Control Management System.

“While the final performance of the cars can’t truly be known until they’re in service, It’s not wise to wait for that moment (to test and make changes), when it might be too late,” Kolesar said.  “It is far more prudent to do early evaluations of designs to assess their compliance to specification requirements. The best way to do this is through a rigorous testing regime, something which BART has always required, and will continue to require in the far future.” 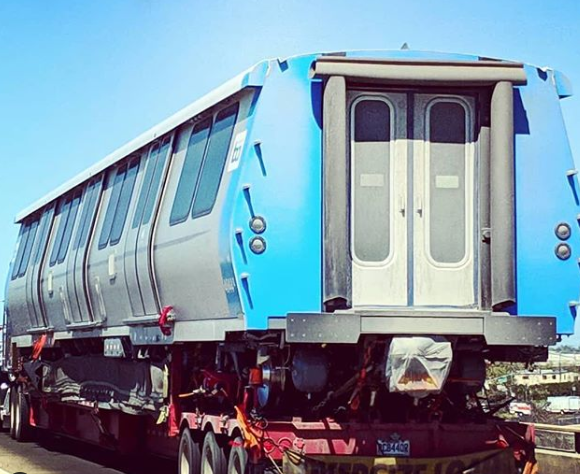 Image above, a Fleet of the Future train car is shipped across the country to the Bay Area. They've been spotted on highways throughout the U.S.

By February 2020 BART anticipates having enough new cars on-site and finished with testing that will let us lengthen almost all peak period Transbay trains to 10 cars and begin to remove and decommission the least reliable legacy cars, the so-called “bad actors” that cause the most problems.  More cars are arriving regularly -- and even being spotted by passersby as they make their cross-country journey to the Bay Area.

Crews are also working to make it easier to catch a new train. A Fleet of the Future tracker is in the works that will show you if one of the next approaching trains at your stations is a new train. That feature will roll out in phases, to eventually include digital platform signs, bart.gov, and the BART Official App, which you can download for free, and will later be available in the feed for third-party developers. Another advantage of the tracker will be indicating whether the approaching train has two or three doors.