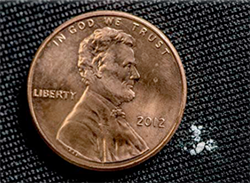 Images above: Narcan single-use dose, left. Penny at right next to grains of fentanyl for comparison

The doses, single-use nasal sprays sealed in plastic containers that look like your typical allergy spray, have been stocked.

BART Police officers have been trained in how to administer the medication, known as Narcan or generically as naloxone.

A policy has been put in place for when and how the opioid antidote is to be used to revive someone who has overdosed.  By the end of May it’s expected all BPD officers will carry Narcan.

And one day in the not-too-distant future a BART Police Officer will spot or be called to check on the welfare of a person who appears passed out on a station floor or on a train. They'll check for signs of an overdose, turn the victim on his or her side, pop the blister seal on the Narcan package, and quickly spray the medicine into a nostril.

A life will be saved. And maybe, just maybe, a second chance at life will mean everything, and motivate that person to get treatment.

"We have been seeing the impact of the opioid epidemic for some time now," said Armando Sandoval, BART's Community Outreach Liaison and Crisis Intervention Team coordinator. Sandoval noted the dramatic increase nationwide in the availability of dangerous synthetic opioids, such as fentanyl, which is often used as an adulterant in heroin and other street drugs.

Fentanyl is highly potent, so much so that a few grains could be lethal, according to the U.S Drug Enforcement Administration’s briefing guide for first responders, which provided the penny image above.

“It’s a public health concern,” Sandoval said. “We’re dealing with the safety of  those who struggle with addiction, the public, first responders, our officers, BART employees and our community partners,” he said. “We have a choice either to be proactive by getting out in front of it or we can choose to get out of the way. We choose to be proactive.”

Carrying Narcan is just one more tool in the officers' toolkits. It is already being used by many other police departments as well as by BART partners such as Homeless Outreach Teams (HOT). San Francisco Public Health Department has been distributing it in the community since 2003..

"One of the real innovations in our program is that we circulate naloxone in the community, among people who use drugs, their friends and family members," said Rachael Kagan, director of communications for the San Francisco Department of Public Health. "It's been very moving to hear about how empowering it is for people in the community to be able to save lives. Sometimes the beginning of recovery is saving someone else."

"We do have an opioid epidemic in our city," she said, "but we have been able to keep fatalities from opioid OD's relatively flat in San Francisco."

City of San Francisco data show that in 2016 there were 104 OD fatalities in the City and 883 reversals, or lives resuscitated using naloxone, she said. In comparison, in 2017, the most recent year for which the data is available, there were 112 OD fatalities and 1,266 reversals.

"One death is too many," Kagan said. "But this is a sign that naloxone has been very effective in saving lives."

Kagan welcomed the addition of naloxone to BART PD's resources.

"The opioid crisis is a regional issue, and BART is a regional service," she said. "You all are really going to extend the strength and the reach of this work. It's a huge contribution."

You can read more about BART’s efforts to collaborate with the communities we serve to combat social issues such as homelessness, mental illness and drug addiction, by visiting our Social Resources page.