Agent of Connection from Ivan Cash on Vimeo.

BART Station Agent William Cromartie is being honored with an award from the San Francisco Mental Health Board for “making lives better every day,” said Helynna Brooke, the board’s Executive Director.

Cromartie has made quite an impression, and not just on Brooke, who ran into him each day at West Oakland Station and was impressed by his positivity, his diligence and especially the personal touch Cromartie brings to the job. He also has worked at MacArthur and 19th St./Oakland, and fills in at other stations. Cromartie will receive the award from the san Francisco Mental Health Board on the evening of June 25.

“He really contributes exceptionally to the mental health and well-being of the community,” Brooke said. “I don’t even think he knows how great an impact he has. He is an incredibly giving person.”

How does he do it? We spent some time shadowing Cromartie on a shift at 19th St./Oakland recently, trying to learn the secrets of his zen approach to one of the most difficult and busy jobs at BART.

Cromartie grew up in a small town in the Deep South, a shy child with a speech impediment. He couldn’t see himself staying there, selling cars at the family Chrysler dealership. His older brother planted the idea that California, where public higher education was cheap and plentiful, would be a good place for William.

He’s never looked back. He attended UC-Berkeley as well as College of Alameda, and initially had his own business, a legal processing firm. He was tagging along when a friend went to apply for a BART job and decided on a bit of a whim to apply also.  Cromartie was hired in 1996 as a train operator.

As a “people person,” he didn’t care so much for all the time alone in the cab, so after 10 years he switched to station agent, where he has become well-known for his customer care.

At 19th St./Oakland, a succession of people approach the booth for help on different issues: Directions to the AC Transit headquarters? He’s on it. Ticket won’t process through the machine? He’s on it. A lost customer who only speaks French? Check. Merci beaucoup. He shakes hands, gives fist bumps, smiles, and warmly accepts hugs from his longtime “regulars” who know him well. 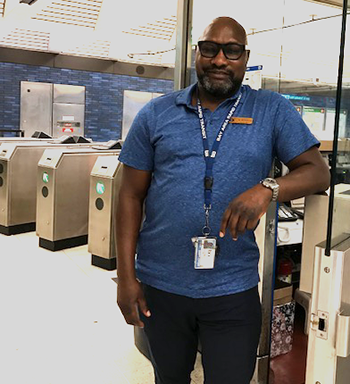 “This job is about understanding the importance of person-to-person contact,” he said. “And if you’re happy, it’s going to influence the people you meet. No one wants to be treated like they don’t matter. So in my work I am saying to them, 'You matter. I care about you. I’m here to help you.' "

Cromartie and his wife decided to live in a suburban community two hours away, to raise their daughter in the slower pace of life outside the Bay Area, where they could have a home. That’s a two-hour commute each way, but it doesn’t get him down.

“I am happy with my life and with my job,” he said. “It’s super fun. If I can make a positive impact on someone’s experience, I’ve succeeded.”

One person influenced by Cromartie was local filmmaker Ivan Cash, who made a short film about him called “Agent of Connection.”

“I had been commuting for about six months and kept running into William, and thinking, ‘Who is this person who is so inspiring?’ He kind of made my day every time I came back from San Francisco to Oakland at the end of the day.”

“He’s definitely figured something out,” Cash said. “He’s so positive. We’re all looking for connections in life, that innate desire to feel seen, heard and acknowledged. William does that. He really sees people, he looks you in the eye, he’s very sincere. He’s figured out that the point of life is connection.”

“As mundane as that sounds, it’s actually very impactful, and it stays with you,” Cash said, adding that Cromartie must have had that impact on untold hundreds of thousands of lives over the years – making him a perfect candidate for a mental health award. “He’s really an exceptional person.”

Armando Sandoval, BART’s Community Outreach Liaison and Crisis Intervention Team coordinator who works closely with NAMI, the National Alliance on Mental Illness, said Cromartie’s impact is important. Sandoval pointed to the Dalai Lama’s writings in A Policy of Kindness, which states: “When we feel love and kindness towards others, it not only makes others feel loved and cared for, but it helps us also to develop inner happiness and peace.”

Sandoval said Cromartie’s day-to-day impact on BART riders puts that lofty sentiment into action. “By being kind to others, it creates a powerful, positive energy,” he said. “BART is lucky to have an employee like him.”