Tale of the rail: BART replacing old third rail for a smoother and more reliable ride

Tale of the rail: BART replacing old third rail for a smoother and more reliable ride

A key part of BART’s Measure RR rebuilding work is renewing power infrastructure, a major upgrade that will improve the rider experience through greater reliability and less down time for repairs.

Along with cable and traction power substation replacement, part of the job is replacing sections of third rail, the electrified rail that powers BART trains.

Stacked high in a chock-full storage warehouse are stainless steel-capped, aluminum third rail segments that will be more efficient and economical. The new rail is half the weight of the old and conducts electricity better.

That means easier and faster installation, because the old rail weighed in at 27 pounds per foot or 810 pounds for a typical 30-foot segment or “stick,” more than twice the weight of the new rail. It takes many workers to handle such a heavy load, and the old rail is also six times stiffer than the new, making it tough to position just right. With the new rail, BART can do repairs more quickly, requiring less down time and inconvenience.

Image: Close-up detail of the new third rail that is stacked in a warehouse waiting to be used

The warehouse holds some 2,400 sticks of new rail, at 12 pounds per foot, or 360 pounds per stick. That’s light enough to require far fewer workers to handle. There’s a thick aluminum bar to conduct electricity, covered by a tough stainless steel cap for resistance to the countless iron paddles from train cars that slide across its top, transferring power to the train.

“Third rail is an important asset for reliability of the power system and continuous train operation,” said Myat San, BART’s Group Manager for Power and Mechanical Engineering. “The useful life of these third rail segments is about 20 years. As they age, efficiency and performance will be impacted.”

Back in the 1960s and 1970s, Kaiser Aluminum (no longer in business) supplied all of BART’s third rail for the core system. 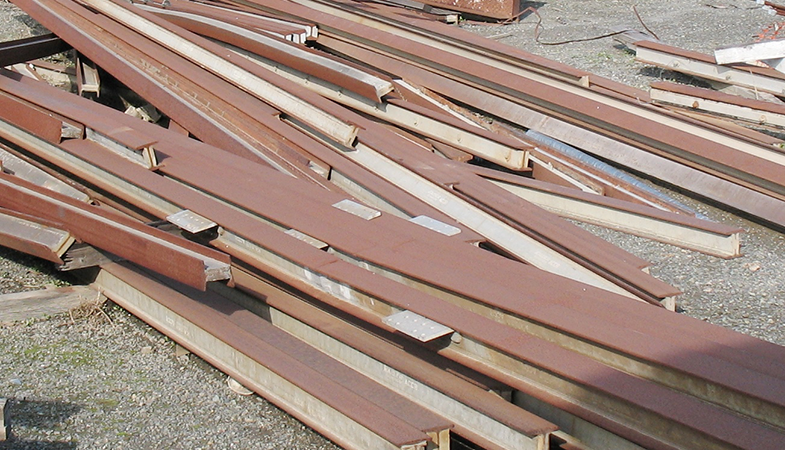 Old Kaiser Aluminum rail, past its useful life, is put into a scrap pile for removal

The original third rail was made by standing 30-foot steel I-beams vertically in molds, and pouring in molten aluminum for a strong bond. It was symmetrical top and bottom, so when the tops wore out after about 20 years of use, BART electricians simply flipped them to use the other side. Eventually both sides would wear out and require third rail replacement.

By around 1990, with much of the third rail in high-wear areas at the end of its useful life and with no more Kaiser Aluminum to provide new rail, another manufacturer provided for core system replacements, as well as for new extensions to the BART system such as to San Francisco International Airport. This rail is the heavier, less conductive rail in much of the system today.

Image above: A corroded, weather-exposed rail cross-section, left, and a pristine sample

Several years ago BART tested a new, stainless-capped aluminum third rail product that offered many advantages, and test sections were installed south of Bay Fair Station to see how it performed. After successful tests, BART is moving forward to install it systemwide, replacing legacy 4 micro-ohm rail with the more economical, more conductive, lighter and more flexible new rail. That’s good news for passengers, who can expect a smoother, more reliable ride from the new third rail, the backbone of power for the whole BART system.

“The Measure RR work we are doing to replace substations, transformers, third rail and more, is about reliability and a better experience for BART’s riders,” San said.