BART partners with Cypress Mandela: “We need more people to do the work”

BART partners with Cypress Mandela: “We need more people to do the work” 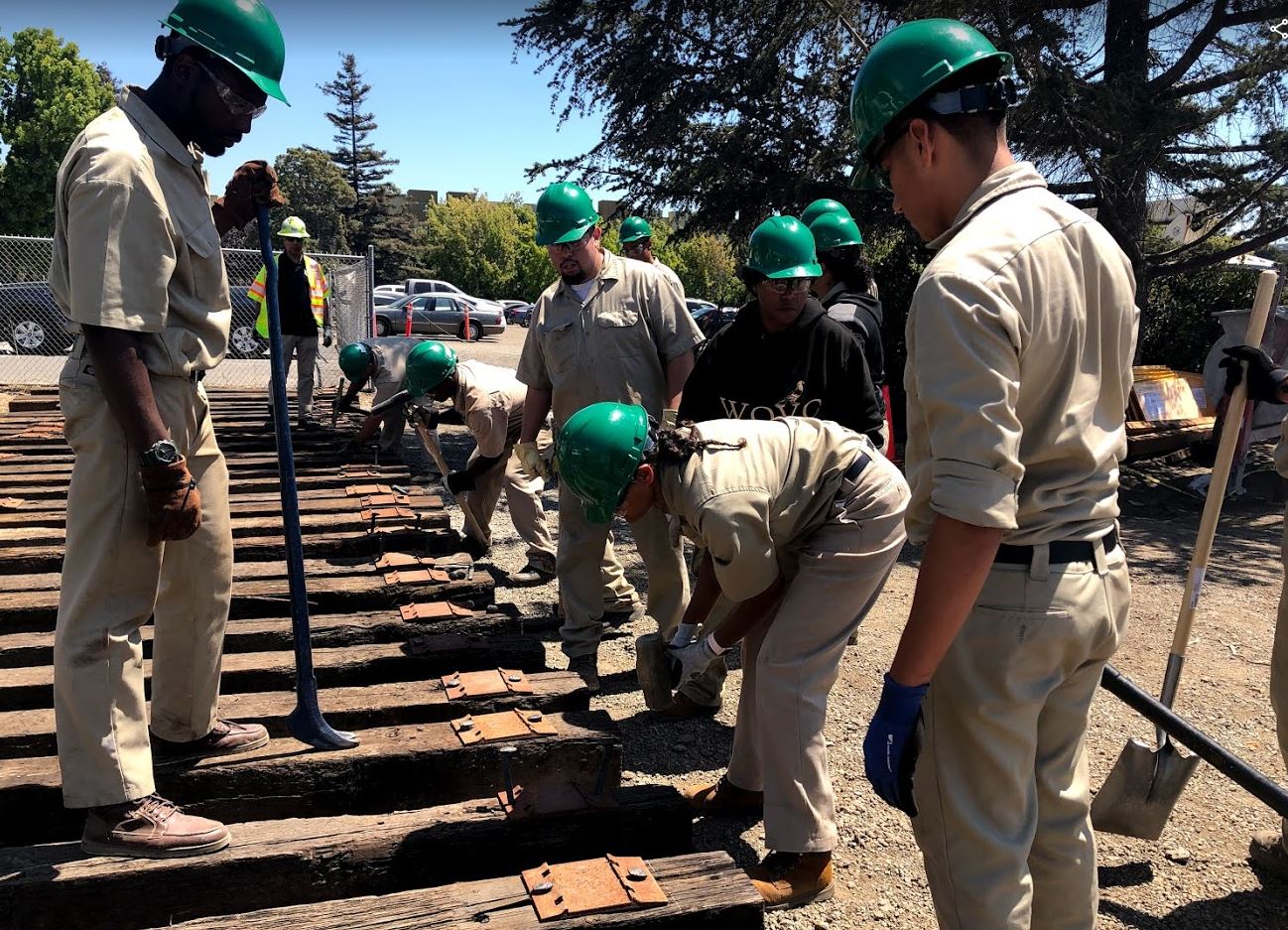 One works in an Amazon warehouse pulling items for packaging. One just graduated high school. Another has a masters’ degree in forensic psychology.

What they all have in common is the desire for a stable job that pays a living wage, a way to take care of their families, and the driving ambition to learn the skills that will get their foot in the door at BART for jobs as Track 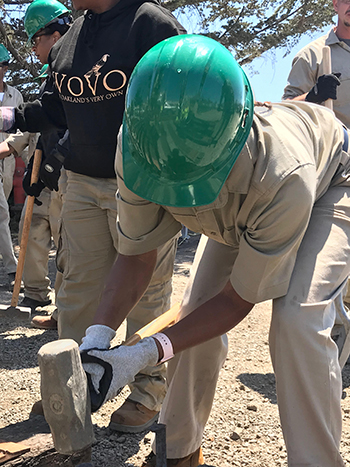 BART’s railroad-specific workforce development program at Cypress Mandela Training Center means hitting the books and taking tests, for some who haven’t been in a classroom in years. It means hard, physical labor under the hot sun, like swinging a spike maul onto a spike that holds sections of track together or building a mockup of station platform edge tile.

“Effective partnerships like BART has with Cypress Mandela are instrumental for the community,” said Art Shanks, Executive Director of the training center. “We can reach the community in ways that BART can’t. We go to job fairs, high schools, churches, social settings. We’re involved pretty much everywhere. And we can reach excellent hiring prospects from the community who never thought about BART jobs.”

Tom Delaney, BART’s Superintendent of Way and Facilities, has seen the results, based on one earlier cohort of Cypress Mandela-graduates hired as Track Workers who’ve been at BART for a couple of years now.

“They all have a great attitude, they’re hardworking, and Cypress does a really good job preparing them for work,” he said. “Out of that first group, all of them who wanted to go for promotions have been promoted” to higher-responsibility jobs, he said. The newest class includes material not only for potential Track Workers but for Structures Workers also.

"They’ve come in as basic laborers; we train them to get their license to be equipment operators, anything from driving a crew truck to operating some of our bigger on-rail equipment,” Delaney said. “I have high hopes for this next class, too. I’m hoping they’ll stay at BART for their careers and will grow within the organization.”

Shanks founded the Cypress Mandela program, originally based in West Oakland, after the Loma Prieta earthquake in 1989, based in part on his insight that workers would be needed to rebuild the Bay Area’s infrastructure. Now, the program operates out of an 80,000-square-foot training facility on 66th Avenue in Oakland. Students wear khaki-colored work uniforms; are responsible for bringing their safety gear each day; and commit to following all the many rules of the program.

Shanks frames the program as more than just a link to jobs; it’s also a way back to self-confidence and respect.

“Some of the individuals we have brought in, maybe they had employment at somewhere like Burger King, where they didn’t make a living wage, or maybe they are looking at re-entry to the job market after working out issues, anger issues, or previous incarceration,” he said.

“A lot of people don’t realize that if you’ve gone a long time without working, you are apt to get depressed,” Shanks said. “It can be very hard getting out of that slump. This program motivates them to want to do something better.”Saul Almanza, BART Special Projects Manager for Track and Structures who helped with the students’ learning, said the program benefits BART, too, because it delivers employees with a solid work ethic and determination to succeed.

“We’re starting here with Railroad 101,” Almanza said. The  students learn the basics, like using track tools, wearing personal protective equipment, following chain of command, and doing basic track and structure tasks. For those workers who get hired after the 16-week program, there will be specialized training to follow.

“I like it,” said Weyland Watts, who heard about the Cypress program from his brother, who went through it earlier. “I worked in banking and finance, and I got tired of sitting behind a desk.”

Cleon Waters’ father trained at Cypress. “It changed his life,” said Waters, whose dad now works in construction. “I saw him put in the blood, sweat and tears to achieve something. It means a lot to me to be here.” Mia Brown, the student with a graduate psychology degree, had been interning for a family justice program, but thought she would give the track worker program a try.

“This challenges me in a different way,” said Brown, after her turn swinging the hammer. “I enjoy being out, working in the field, using my body, and I hope to get a position wherever I can fit in,” she said. 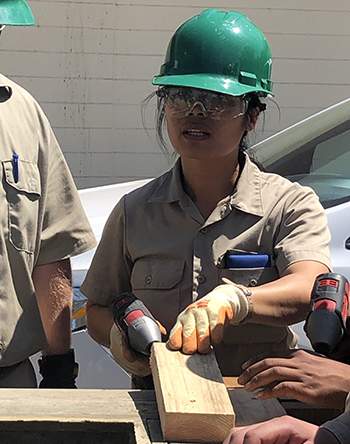 Adrian Gomez, just 18, started the program the day after he graduated high school. “I could work at Jack In the Box, but I want a career, not just a job,” he said. “I played baseball in high school, so I know the importance of teamwork. We back each other up out here and pick each other up if someone is having trouble. We work together to get the job done.”

As the Track Worker students built a section of track, the Structure Worker students were in the classroom hearing tough love from Mark Rubenaker, BART’s Special Projects Manager for Track and Structures.

If you are hired, “you are going to be the new person, the low [in seniority] person,” Rubenaker said. “You’re going to work nights and weekends and holidays. I do, too. You guys mean a lot to me, and I want you to know that I have your back.”“Labor Day is coming up and that’s all hands on deck,” he said. “You’re going to miss the picnic. But I will too. I’ll be there for my crew, and I will make sure they understand they are not alone.”

“I need MORE hands on deck,” Rubenaker said. “BART is rebuilding its entire system, and we need more people to do the work. That’s where you all come in.”

Prospective structures worker Thu Nguyen, photo at right, said she was prepared for whatever BART could bring. “I know that once you have your foot in the door, there are opportunities to move up and expand to other areas,” she said. “I like that it is hands-on and that you get to keep learning new and different things. I love to learn. Knowledge is power.”

Nguyen and the other potential structure workers learned about the duties of the job, which can be grueling.

As Delaney put it, “Structures Workers do heavy construction, they do heavy concrete work, jackhammering rebar, placing rebar, pressure washing trackways.” Delaney explained that another critical role is handling water leaks in tunnels -- “So they’re the last line of defense of our tunnels." Eric Shanks, Project Coordinator at Cypress and Art Shanks’ brother, said BART and Cypress Mandela help each other – and the community – through this program.

“We’re training the next generation of workers for the building trades,” Eric Shanks said. “The positions we’re training for, a lot of these students haven’t even heard of.” Cypress Mandela, a 501c3 nonprofit that’s been in business for 27 years, serves about 80-90% people of color, and a growing number of women.

“We set a high standard. They have to be respectful, grateful, physically fit and mentally sharp,” Eric Shanks said. “Our motto is to be confident, but always be humble.” The first batch of students from this program is being considered for Track and Structures Worker openings starting at $29.45/hour that have just closed; more jobs are expected to be posted in the near future as others are promoted.

You can sign up to receive notices when jobs are posted at www.bart.gov/jobs.