The features include a Fleet of the Future tracker and details about cancelled trains.

“Platform digital signs are one of our most important communication touchpoints we have with the public because they offer real time information,” said Powers. “These improvements will increase transparency with our riders and will show we are working on ways to make taking BART easier and more enjoyable.”

Fleet of the Future Tracker

Riders at the platform level will now know if one of the approaching trains is a Fleet of the Future train with three doors or a legacy train with two doors.  The display will specifically note if the approaching car has two or three doors.  Riders looking to experience a Fleet of the Future train will now be able to look for the 3-door train on the platform sign.

This information is very important for people who use wheelchairs as the wheelchair area on the new cars is located near the middle door. Floor decals marking where the third door lines up on the platform have already been installed at a few stations and will continue to be placed systemwide.

The Fleet of the Future train tracker in being rollout out in phases. It will be added to the Real Time Departures feature on bart.gov and the BART Official app before the end of the year. BART plans to offer the new train data feed for third-party developers at a later date.

The platform signs will now make clear when a scheduled train has been cancelled or removed from service.  The sign will specifically note when a train has been cancelled, giving riders advance warning.  BART’s new Trip Planner shows cancelled trips, but until now the platform signs didn’t. The train would simply disappear from the sign and PA announcements would be made at the station.

This new feature will help riders make decisions about what train to board.  Experienced riders often target certain trains, particularly on the busy Antioch/Yellow line. They will pass up a train arriving sooner with the hopes of boarding a less crowded train.  Now, riders will know if the train they hoped to catch has been cancelled and they should board another train sooner.

The Computer Systems Engineering team is also working on other improvements to these important signs.  They are currently working on a “delayed” notice for trains that are holding down the line.  This update will indicate when an approaching train is being held and delayed. Currently, the sign will show how many minutes away the train is, but the number of minutes simply stays the same, frustrating riders confused about what is happening.  This is a known problem during single tracking and other times a train is being held for police activity or another problem.

The team is currently exploring the next generation of platform signs and plans to pilot modern signs at three yet-to-be-determined stations in the next 12 months.  BART’s current platform signs are no longer manufactured making repairs very difficult as parts need to be replicated.  Staff want new signs that use full color to incorporate the color of each line as the new Fleet of the Future trains do and the ability to post side-by-side messages. This will mean train arrival times will always be displayed alongside other messages from BART. 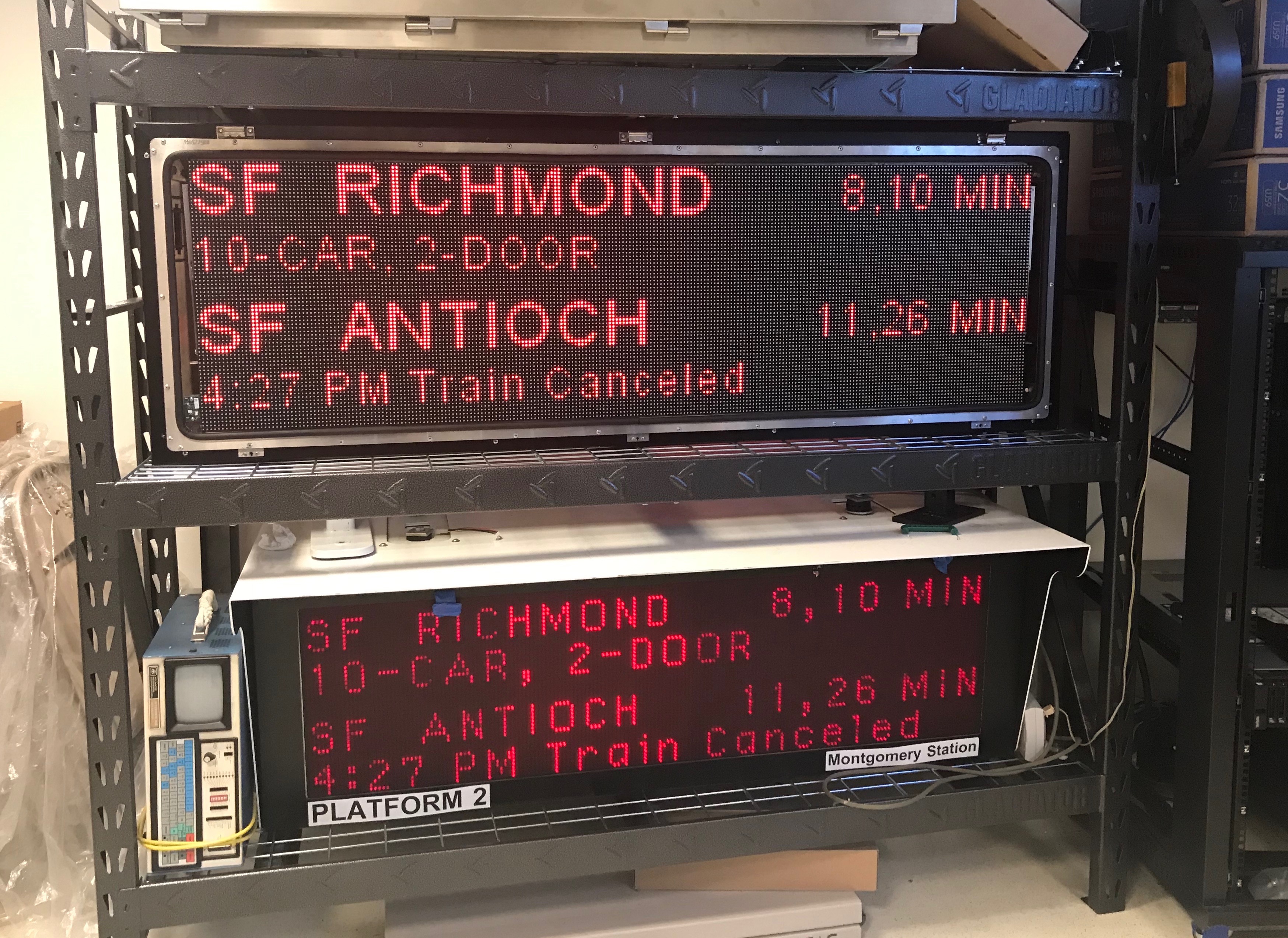