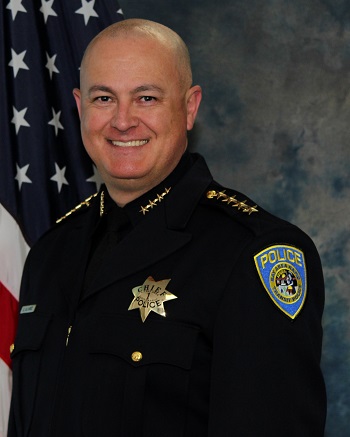 BART’s General Manager Bob Powers announced today the hiring of Ed Alvarez as Chief of Police and tasked the new chief with immediate changes to increase officer presence on board trains and other strategies to reduce crime on the system and improve the rider experience.

Alvarez is a 22-year veteran of the BART Police Department, an East Bay native, and has spent his entire law enforcement career moving up the ranks within BART Police. He was serving as Interim Chief of Police and was previously the Deputy Chief in charge of the Support Services Bureau.  The selection is the result of a nationwide search process involving BART's Police Citizen Review Board and Independent Police Auditor.

“Alvarez knows the system and has a vision for safety that includes short-term and long-term strategies to grow the department into a fully staffed, progressive agency serving diverse communities,” said General Manager Bob Powers.  “We must do more to ensure all riders feel safe and to prevent crime on BART.  Ed Alvarez brings the internal knowledge coupled with the creative thinking to better serve our riders, support our officers, and increase accountability without delay.”

The appointment is effective immediately and Alvarez is swiftly putting into place new deployment strategies responding to concerns voiced by riders in Customer Satisfaction surveys and the General Manager’s Listening Tour. Changes include:

“I am excited for the opportunity to move the department forward and improve the relationship with our riders and our employees as we work together to make BART the safest transit system in the country,” said Alvarez.  “Our officers take great pride in protecting and securing our busy system, they are skilled and committed, and I will do everything I can to support their efforts.”

As Interim Chief of Police, he oversaw the record-breaking acceleration of hiring, outpacing attrition to increase the number of officers available for patrol; the on-going process and commitment to BPD’s prestigious accreditation by the Commission on Accreditation for Law Enforcement Agencies (CALEA); the improvement of surveillance video recovery time; and the roll out and life-saving deployment of Narcan.

As a BART detective, he investigated, arrested, and helped get the conviction of a human trafficker that targeted a young juvenile.  As a sergeant he’s credited with starting the Critical Asset Patrol team that provides additional uniformed presence within the stations and on trains in the core of the BART system which includes the downtown San Francisco and downtown Oakland stations.

Alvarez is a first generation Mexican-American, fluent in Spanish, and grew up in Newark riding BART to A’s games and into San Francisco.  He understands the needs of the riders and the complexities involved with transit policing. It is Chief Alvarez’s goal to improve engagement between BART police and the public through increased outreach and accessibility.