As the 30th anniversary of the Americans With Disabilities Act (ADA) approaches, members of BART’s Accessibility Task Force (BATF) reflected on what the landmark legislation has meant in their lives.

Hale Zukas, a pioneering disability rights activist, was a founding member of the BATF and serves on the advisory body to this day. Zukas also worked behind the scenes to push for passage of the ADA, which turns 30 on July 26, 2020.

Zukas has Cerebral Palsy and uses a wheelchair; he communicates with the assistance of a helmet-mounted joystick and letterboard. Zukas was a Cal student in the 1960s and co-founded Berkeley’s Center for Independent Living (CIL) in 1971. The modern disability rights movement was born in Berkeley; first-in-the-nation curb cuts were at the corner of Bancroft and Telegraph, based on technical designs by Zukas. 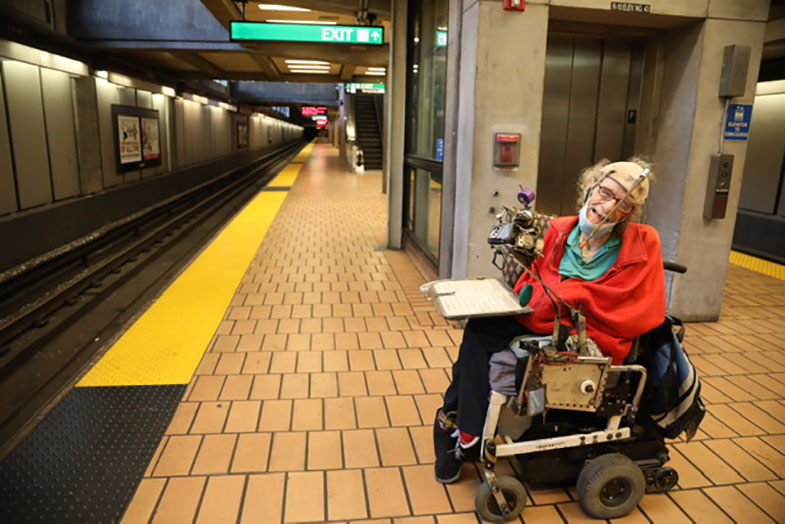 When asked what the ADA means to him, Zukas replied with a single word: “access.”

Zukas helped to create that access. In what would become the longest occupation of a federal building in U.S. history, he and others from the movement staged a nearly month-long protest (called the Section 504 sit-in) at a Health, Education and Welfare office in San Francisco in 1977. The sit-in brought worldwide attention to the nascent movement for equality.

Zukas shaped the BART system since its early days, co-founding BART's accessibility advisory group in 1975. He was a driving force in designing the button placement inside BART elevators at a height that could be reached easily by someone in a wheelchair. Zukas also has been the subject of a short documentary film by Brad Bailey, "Hale," that won recognition at the Student Academy Awards.  The BART Board recognized Zukas with unanimous passage of a resolution honoring him at its July 23, 2020, meeting.

BART became the first public transportation system to be fully accessible to people with disabilities, thanks to the advocacy of pioneers like Zukas and the late Ed Roberts, namesake of the Ed Roberts Campus  independent living center at the Ashby BART Station. 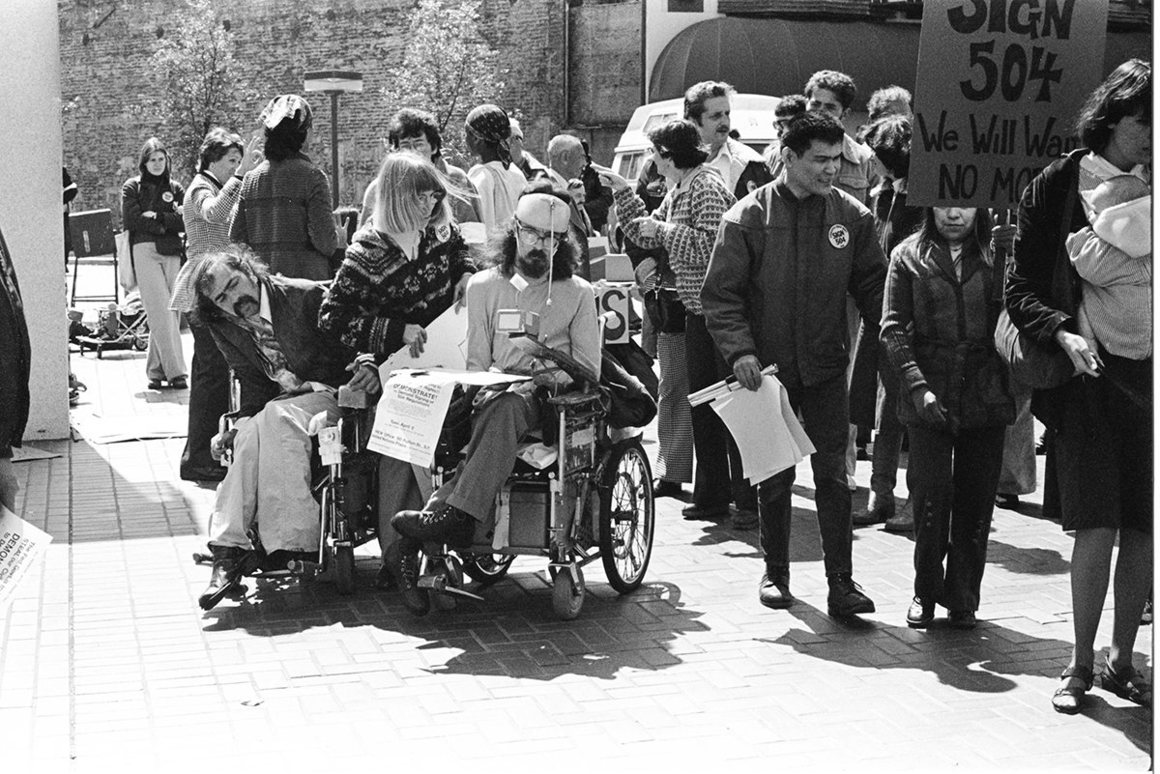 Hale Zukas at sit-in protest, at center with helmet, photo by Anthony Tusler / courtesy of CIL

Fast-forward to 1990, when the ADA became the law of the land, building upon earlier hard-fought gains. The disability rights movement continues, however, in ways large and small, at BART and throughout society. Other members of the BATF advisory panel shared what the ADA has meant to them in the vignettes below (lightly edited for length and clarity).

IN THEIR OWN WORDS

"I consider it (ADA) the most significant law passed in my lifetime. It has shaped my career, where and how I live and how I get around immeasurably.

I wanted to serve on the BATF because BART accessibility is of paramount importance to me. To have the opportunity to comment and advise on existing transit issues as well as assist in the development of innovative design at new BART stations that will positively impact access for future generations of seniors and disabled people, is a responsibility I feel strongly about.

Public transportation means everything in my life. I have not owned a car since the mid-90s. I have used BART, bus, the train and the ferry to get around since then and have been employed by several different organizations within that time frame as a Travel Trainer, teaching seniors and disabled people how to access and ride public transit.

My one message to share would center around awareness. If a senior or a person with a disability is taking longer or struggling with a certain task, being aware can make a big difference. It is much appreciated if you can assist someone or exhibit patience and comprehension with the person in the moment."

"I recall my wife and I going to Washington, D.C., with over 50 blind Californians to persuade our congressman to support the ADA and how Republican President Bush (the elder) signed the ADA into law despite opposition of the business community such as the Chamber of Commerce. While California passed similar statutes with stronger language, the vigorous Federal enforcement of the ADA created greater impact on societal actions and especially attitudes regarding employment and public accommodations.

I grew up and spent most of my life during the post-World War II era during America’s decline in public transportation. This was particularly the case when I lived outside the East Bay in Southern California where I depended on public transportation as a County Social Worker. Going to and from work, I spent many hours waiting for fewer and fewer buses until the public took over the local transit system.

A system like BART was only a dream and when I returned to live in the Bay Area, I joined the BATF as  part of the new BART system which had great potential but many growing pains. Today buses have real-time schedule announcements as well as automatic calling of major bus stops and BART has frequent connections with Bay Area cities, even San Jose."

"I was just 3 years old when the ADA was signed into law, so it has been in effect for as long as I can remember. Growing up, I largely took it for granted that public places were legally required to be accessible to disabled people, having never known any different. I knew that had not always been the case, but it was only as an adult that I learned just how recently that was.  Consequently, although intellectually I understand how far we’ve come, I tend to see ADA compliance as a bare minimum, rather than a standard to strive for.

I first learned about the BATF when researching accessibility on BART following a bad experience involving access to priority seating on a train.  Wanting to learn more about accessibility on BART, I decided to attend a BATF meeting.  I found it interesting, and began attending regularly, and eventually joined the BATF. I’ve been riding BART for more than 20 years, and since I have a disability that does impact my ability to access public transit, it’s an area I care about. I have often had to backtrack several stations to get to a train that was empty enough that I could find a seat, sometimes adding up to an hour to my trip. I have also had the occasional experience of sitting in a BART station for several hours until I was able to get on a train in either direction, and sometimes still had to backtrack at that point.  I joined BATF because I want to help improve accessibility for myself and others.

Public transportation allows me to go places I otherwise couldn’t or wouldn’t. I grew up less than a mile from a BART station, and public transportation provided me the freedom to travel throughout the Bay Area (at least to the handful of destinations approved by my parents) before I was old enough to drive. Now it makes my weekly trips from my home in Concord to therapy appointments in San Francisco possible (or at least it did, pre-COVID). I also take public transportation when I travel outside the Bay Area, and even overseas, where I don’t have access to a car.

Not all disabilities are visible. You can’t always tell by looking who might have a disability, or need a particular accommodation who needs it without realizing it. You might be prepared to yield the seat or space if you see someone who needs it more than you do, but the need may not be visible, and they may not be comfortable asking."

"The ADA has meant dignity to me. By having this Act, the humanity of people with disabilities has been supported by our nation. We still have businesses and construction ignoring accessibility, especially if the businesses were built before the law, and the construction is housing, but more and more people and business leaders are being educated. The arc of history is trending toward access … Public transportation makes it possible for me to get to work without having to pay outrageous prices to park.

I wanted to serve (on the BATF) because I saw so many people with disabilities being ignored by other passengers, and often forced to wait for the next train, and then the next, and the next during rush hour and if they could not walk onto the train, they had no chance to get on.

I would like to see members of the BATF give presentations at schools to educate kids and teens about the disability seating and spacing on trains. I have witnessed that many do not know, and with everyone in their phones instead of paying attention around them, I don’t think they read the signs or listen to announcements. It is so important for people to hear other’s stories. I think if we put together presentations and talked about accessibility, it would benefit everyone.

Visibility is so important. It would be great if BART did more to promote the BATF and would involve us more."

The late Ed Roberts, the activist for whom the Ed Roberts Campus at Ashby BART Station is named, summed up why equality for people with disabilities is a societal good that affects everyone.

“As we get older, we realize that disability is just a part of life,” Roberts wrote. “Anyone can join our group at any point in life. In this way, the Disability Rights Movement doesn't discriminate. As those of us who are temporarily able-bodied and working for access and accommodations now get older, the changes we make now will benefit us as well.” 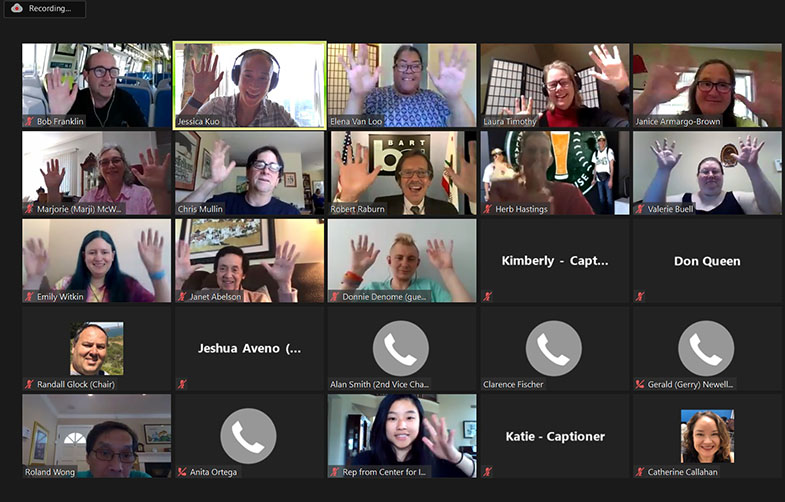 The BART Accessibility Task Force is currently seeking new members to serve. For more information on how to apply, visit the BATF webpage.