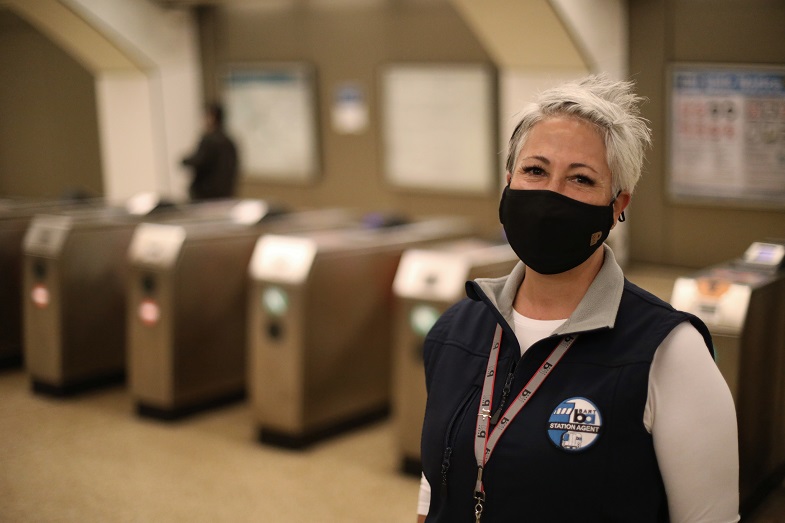 Going above and beyond to help riders  is nothing new for BART Station Agent Dee Malabuyo.

Malabuyo was recognized recently with a commendation for exceptional service to Vinita Garnier, a rider who relies on a walker and service dog, by anticipating Garnier’s need for an elevator and calling it for her.

“I started crying, actually,” said Garnier, who takes BART every day and, like many people with disabilities, counts on public transit for mobility and the independence it provides.  “It was so touching to me that she noticed I was struggling and helped me out.”

Garnier took the time to write in with her thanks. When BART receives compliments that a particular worker has done something praiseworthy, supervisors will nominate them for commendations. It’s just a piece of paper, but it’s important for what it represents.

Malabuyo was well-known to many BART riders from working for years at Powell Street Station, where her calm-through-the-storm demeanor kept things running smoothly at one of the busiest stations with the most tourists. Now she’s based out of Downtown Berkeley, and the coronavirus has slowed down traffic.

“Inside the booth we have cameras, and I’ve kind of gotten in the habit of looking out for customers who need help,” Malabuyo said. “I saw her walking slowly off the train, and I sent the elevator down to the platform for her, so she didn’t even need to push a button.”

When Garnier finished her errand in Berkeley and was going back down to the train, Malabuyo’s sharp eye spotted her once again at street level, and she had the elevator ready and waiting.

“She was just really paying attention,” Garnier said of Malabuyo. “It turned my whole day around. It touched my heart.”

Malabuyo said it was all in a day’s work. “It’s been a blessing to have time to get to know my customers better” she said of the challenges of 2020. “We are essential workers, and we’re here providing service for other essential workers. I am so thankful for the trust they put in us.” 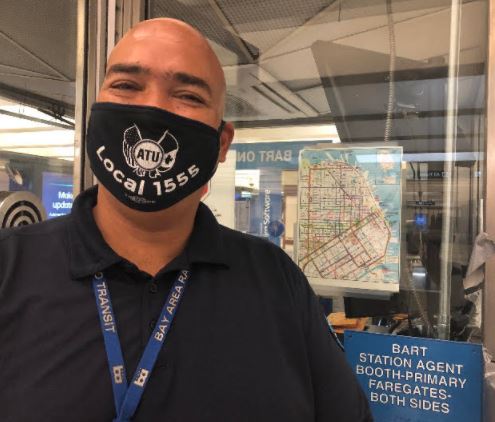 Another Station Agent, Ed Buenger, was also recognized recently for outstanding service. He knows his customers well – down to the minute, noting, “One of the guys I helped stops by to talk to me every day now, he’s my 7:47, every day, and I wait for him to come through.”

When a machine malfunctioned on a customer’s purchase, Buenger helped the person with a voucher.

“He was kind of agitated at first, but I told him, ‘I’ll get you right,’ and I gave him a voucher to where he was traveling.”

Buenger helped another customer, a first-time rider, at El Cerrito del Norte, where he was based before recently moving to Montgomery Station.

“I showed the fellow around, told him what he’d need to do to ride,” Buenger said. “I love talking with customers and making them a little more comfortable. He had ended up with a whole bunch of coins too and I was able to swap them to dollars for him.”

The customer whom Buenger helped wrote in: “He was a welcoming presence, available for questions, positive, polite. He’s a model for all Station Agents.”

Paula Fraser, the Assistant Chief Transportation Officer for the downtown San Francisco and the Richmond BART lines, made sure each agent would have a ceremony (socially distanced) with their peers and supervisors cheering them on.

“I am so proud of the work that our Station Agents have been doing during these challenging times, but not surprised,” said Fraser, who started her BART career 40 years ago and remembers the days after Loma Prieta when BART was a round-the-clock lifeline for the Bay Area. “Our employees go the extra mile and we thank them for that.”

If you’d like to write in a compliment (or other feedback) regarding an employee, you can use the form at www.bart.gov/contact