Additional track shutdowns between South Hayward and Union City will be needed in 2022 but exact dates have not yet been finalized.

A large construction project is now underway in southern Alameda County. Crews are replacing critical track components between the South Hayward and Union City BART stations as well as begin preliminary work to create a storage facility at the Hayward Maintenance Complex for hundreds of new Fleet of the Future cars.

On all these weekends free buses will replace trains and riders should plan to add 20-25 minutes to their trips. The work will require some late night train cancellations on shutdown weekends.

On Saturdays, Sundays, and holidays impacted by shutdowns the last train of the night that normally leaves Berryessa Station at 8:59 pm will be cancelled. Passengers traveling northbound must catch the earlier train at 8:26 pm.

Additional shutdown weekends are expected spring through fall in 2022 but specific dates have not yet been selected. This is the initial phase of work at the Hayward Maintenance Complex with additional stages of construction likely to occur over the next several years.

BART is targeting stretches of trackway in the system that are in the greatest need of replacement and prioritizing work on those sections. This critical work will replace nearly 50-year-old track infrastructure. Many of these aging track components have been in operation since the beginning of BART service in 1972 and have outlived their design lives. Funding for the track replacement work is coming from voter-approved Measure RR.  Funding for the new rail car storage facility is provided in part by a $1.17 billion grant from the Federal Transit Administration. The storage facility is part of the Transbay Corridor Core Capacity Program, which will dramatically increase the number of trains BART can run through the Transbay Tube.

Once complete, you can expect a decrease in the noise level from trains.  BART passengers should experience a smoother, safer, and more reliable ride.  The new rail car facility will bolster BART’s service to San Jose as well as help to ensure BART is maximizing the number of Fleet of the Future trains in operation.

Learn more with the Fact Sheet and Frequently Asked Questions (FAQ) pages for this work. 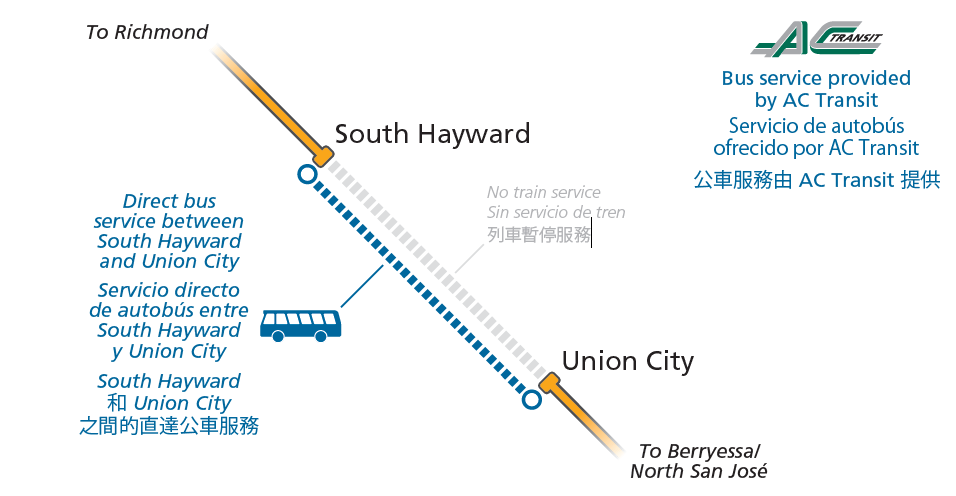 Along with installing new rail components BART will also replace the 34.5kV (kilovolt) electrical cable to ensure trains have a reliable source of traction power. Replacing these electrical cables is also an important step in allowing BART to run more trains in the future. This work will be performed primarily at night but will also require some weekend days when train service between the South Hayward and Union City stations will be reduced to only one track.  This will result in delays of 15-20 minutes for riders in that portion of the system.

Weekend dates when service is expected to be reduced to a single track between South Hayward and Union City include:
July 3-4 (Independence Day weekend), July 10, July 17-18, July 24, July 30-August 1, and August 28.

*This article was originally published on 1/27/21