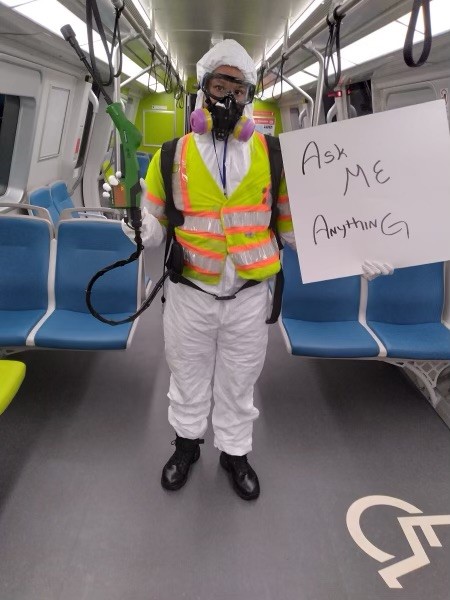 In honor of Transit Worker Appreciation Day on March 18th, BART is holding an "Ask Me Anything" Q&A session on Twitter with a BART car cleaner and a station agent.

Sterling Johnson, a BART car cleaner at Concord Maintenance Yard, and Stephine Barnes, a BART station agent, will take over the BART Twitter account between noon-1 p.m. on March 18 and field questions about their jobs and what’s it like to work at BART. The "Ask Me Anything" event is part of Transit Workers Appreciation Day which BART and transit agencies across the United States will share their thanks to the frontline and yard workers who have kept trains and buses moving during the COVID-19 pandemic.

As one of many BART utility workers who don Personal Protective Equipment (PPE) and disinfect all trains in service using an electrostatic fogger every night, Johnson was recently featured in a National Geographic photoshoot of him at work inside a BART train. Stephine Barnes has worked as a Station Agent for more than three decades and has seen it all.

Those interesting in asking Sterling or Stephine a question can connect on Twitter by tagging @SFBART with questions on Thursday at Noon.

BART is celebrating Transit Workers Appreciation Day with public announcements being played throughout the day inside the BART system featuring BART employees. BART riders, even those who haven’t been on BART since the pandemic and encouraged to share their appreciation for employees on social media.

Tag us at @SFBART on Twitter, @sfbayarearapidtransit on Instagram and @sfbart on Tiktok and use the hashtag #TWAD to join in our appreciation of our transit workers.