“Not One More Girl”: Youth-led campaign aims to combat harassment on transit and everywhere

“Not One More Girl”: Youth-led campaign aims to combat harassment on transit and everywhere 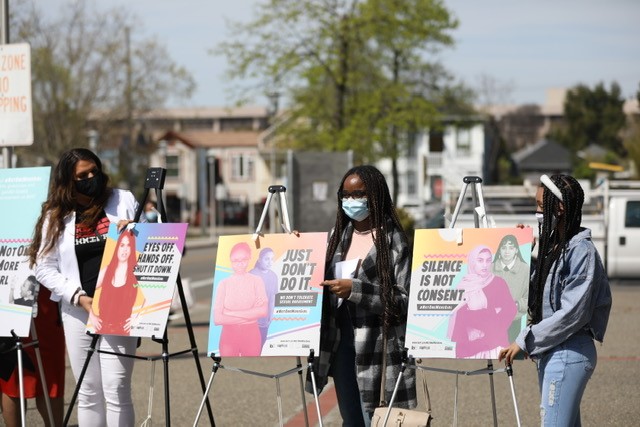 Youth activists Rexy, Uche, and Victoria with posters at launch of Not One More Girl campaign

Rexy* was still a child who just happened to be wearing rainbow-colored clothing when she first experienced harassment on public transportation.

“I wasn’t even out to myself” at that point, recalled Rexy, now a 23-year-old gender justice advocate, vividly remembering the person on a bus who ridiculed her and struck her with a rosary.

Rexy was one of the speakers Friday at West Oakland Station helping to launch a campaign called “Not One More Girl,” a first-of-its-kind initiative developed and led primarily by girls and gender-expansive youth of color, aimed at stopping gender-based violence and sexual harassment on public transportation.

Rexy and other youth activists at the event were energized by seeing the huge art posters they had modeled for that are now wrapped around columns and displayed on the side of the station. They sent a message through their apparel with slogans like "#girlboss,” “immigrant” and “mas feminismo, menos machismo,” Spanish for more feminism and less machismo.

“Being a part of this was very important to me,” said Rexy, a trans woman. “A lot of times when we speak about gender-based violence, it’s focused on cis women,” or those assigned the female gender at birth, she said. “Seeing literally all kinds of women represented here speaks to the necessity of this campaign. By saying ‘Not One More Girl,’ we’re saying our safety is a priority.”

The Not One More Girl initiative was conceptualized over the past year-plus by nonprofits including Alliance for Girls, Betti Ono, Black Girls Brilliance and The Unity Council’s Latinx Mentorship and Achievement Program.

Rexy said that for her, safety on public transportation looks like “being able to plug in my headphones, listen to my music, not have to hide myself, just be able to be fully present without fear of unwanted negative attention. Being able to leave my house and not think, ‘If I go out in this dress, am I in danger? ‘ “

Haleema Bharoocha, Senior Advocacy Manager at the nonprofit Alliance for Girls, conceived of the project based in part on her own experiences of gender-based violence and Islamophobia. Bharoocha has overseen policy development and community engagement for the campaign, which centers voices of and seeks to empower girls and gender-expansive youth.

“There is so much research on how this (gender-based violence) contributes to depression and anxiety” for those who are targeted,” she said. “It takes a toll on our physical and mental health.”

The campaign includes a video on bystander intervention, which encourages public transportation riders to speak up and be an ally to any people being harassed, so long as the harasser does not have a weapon and it feels safe to do so. “What can we do to help keep each other safe?” Bharoocha asked. “What does it look like as a community to hold one another accountable?”

BART is supporting the campaign with a number of concrete actions, including adding sexual harassment as a new reporting category on the BART Watch App, which sends reports to BART Police, so that it can begin to be measured. BART also will place hundreds of youth-designed, public-service-announcement posters designed by youth in train cars and stations to raise awareness. There is also a focus on non-police resources for those who do not feel comfortable contacting police.

In another concrete action, BART will pay girls and gender-expansive youth to sit on hiring panels for certain frontline personnel such as transit ambassadors, so the young people’s lived experience can bring different perspectives to the process. 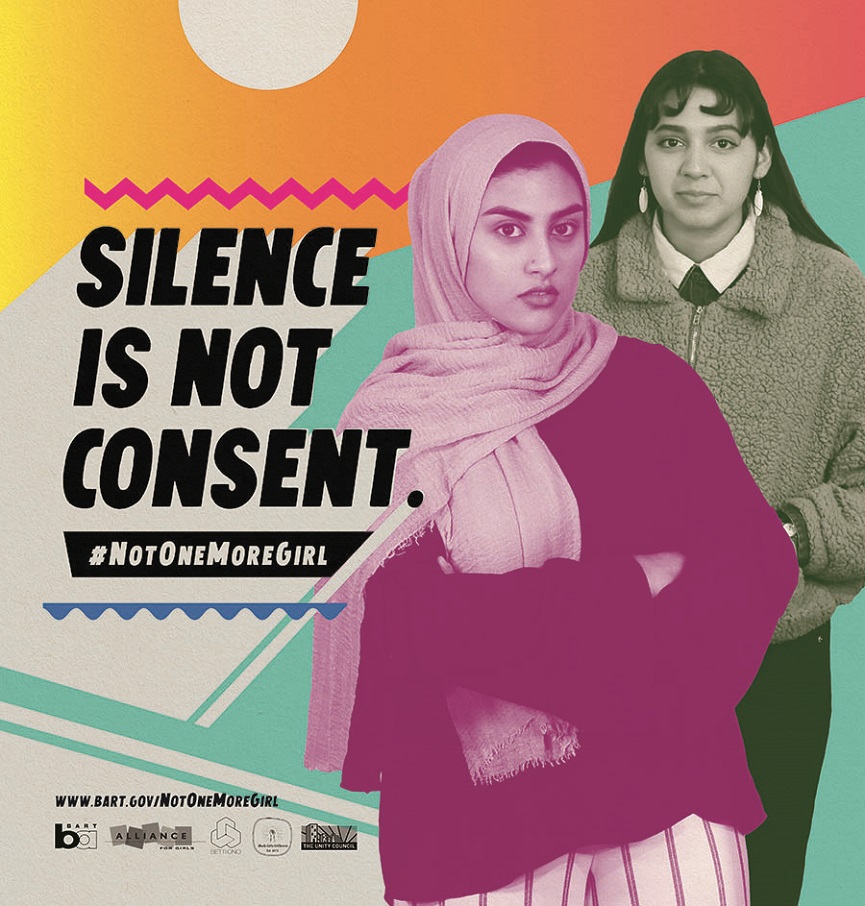 In fact, the youth who led the Not One More Girl campaign held over 100 roles, including public speakers, artists, designers and social media creators. They were paid $18 per hour for their work.

Victoria, 13, a middle school student and youth poet, was among the speakers at Friday’s event launching the campaign.

“We are not helpless little girls,” Victoria said. Even at her tender age, she has seen the stares, heard the whistles, and had to think through what to do in a situation of harassment. “It did make me feel disrespected,” she said. “I am not a toy for you to play with. It’s not OK.”

Victoria, who wants to be a lawyer and an entrepreneur when she grows up, would like to see more people step up and call out harassment when they see it.

Uche, 20, a student journalist who spoke at the event Friday, said girls shouldn’t have to be constantly wary when they take public transportation, having to travel in a group or avoid being out late at night. “Our safety should not be dependent on luck,” Esomonu said. “Your actions will help prove to girls and gender-expansive youth that our safety matters.”

The Unity Council’s Jessica Peregrina said it’s especially important that girls and young women were deeply involved in shaping and leading the movement. “Youth are the driving force of this campaign,” Peregrina said. “The fact they can see leading change is revolutionary. They are the legacy of BART riders who will ride for years to come.”

Honey Mahogany of San Francisco’s Transgender District read remarks provided by Dr. L.B. Williams, the founder of the Black Girls Brilliance middle school program based in Oakland and in Johannesburg, South Africa, where Williams was watching with girls from around the world.

“We can no longer turn a blind eye or pretend that harmful and violent interactions have not occurred and that they do not continue to be a reality for girls and gender-expansive youth on public transportation,” Dr. Williams wrote. “It is our responsibility as a community to demand that not one more girl is subjected to any form of violence. It is up to each and every one of us to be part of this work.”

The entire BART executive team and several BART directors were in attendance at Friday’s event to show support for the campaign.

“With this initiative BART is standing up against sexual harassment and gender-based violence,” said Board President Mark Foley. “That’s not acceptable behavior, on BART or anywhere else.” 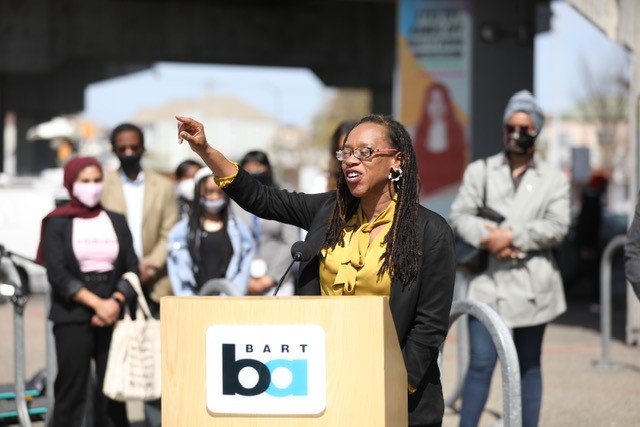 “We want to change the culture,” said Bharoocha, of the Alliance for Girls. “Just realizing how normalized this is, how unchecked; that is a first step that is very important.  We are naming that it won’t be tolerated. Gender-based violence impacts us all. We have a collective responsibility to keep each other safe. Our hope and our vision is that not one more girl will have to go through this experience.”

More events are planned through the months of April and May. For more information visit www.bart.gov/notonemoregirl   Watch the press conference to hear full remarks.