As the Bay Area endures another hot, dry summer, BART is using goats to graze and cut firebreaks on its right-of-way property, which reduces reliance on fossil-fuel-powered equipment, decreases the chance of sparking fires, and increases safety for workers.

"This is the smartest way for us to deal with the vegetation in these areas," said Josh Soltero, an irrigation/grounds worker in BART's grounds maintenance department who was keeping an eye on some 700 goats grazing near Fremont Station on a recent hot June day.

The Spanish-Boer cross goats, contracted from a herding business, chomped away at the dry brush on a steep hillside, the type of terrain that can be hazardous to human groundskeepers using mowers, weed whackers and other power tools. 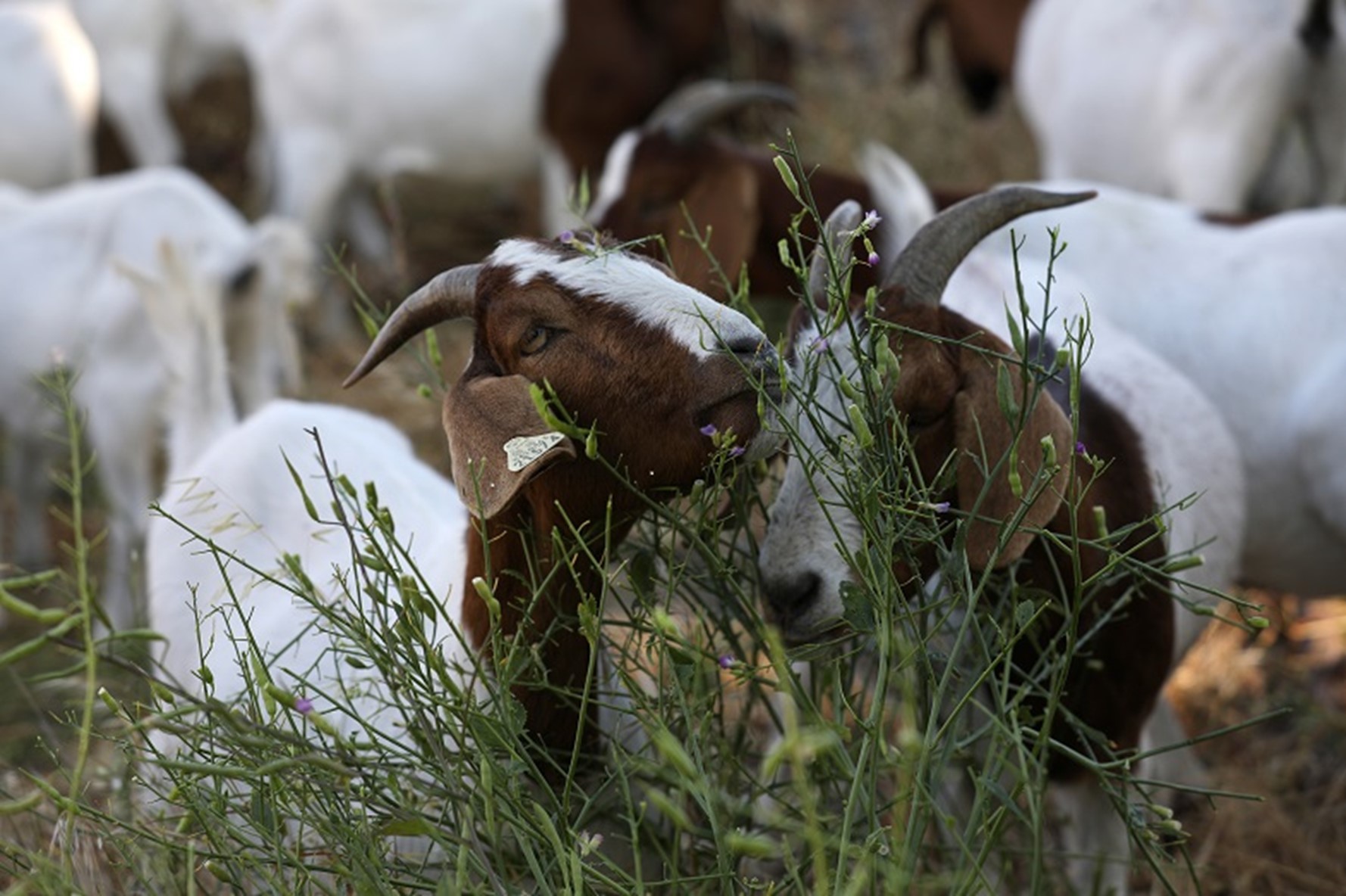 The goats are Spanish-Boer cross, a curious, intelligent and voracious breed

"Mowers can spark fires on this kind of brush that we see in a drought," Soltero said, waving his hand to gesture at the expanse of scraggly, thorny brown hills. "The goats can get into places we can't. They save a lot of shoulders and backs." Indeed, following the goats up the hill for photos was challenging for two-legged observers even without heavy equipment.

Another bonus is appreciation from many neighbors in nearby residential areas, who prefer the occasional bleat of a goat to the roar of a power mower. "They come up and tell us they're so happy we are using goats," Soltero said, and as if on cue, a woman in a sun hat walking by the side of the field, smiled and gave a thumbs-up. 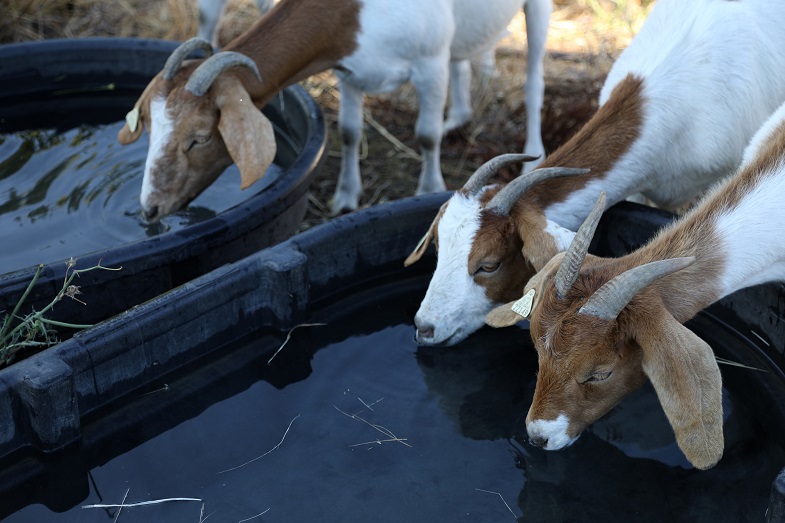 BART provides water for the goats, a herd of which can drink 300-plus gallons a day and can clear well over an acre of vegetation a day. They've been contracted for the past several years and their work has been a step toward BART's overall sustainability goals, said Glen Eddy, Assistant Superintendent of Ways and Facilities. Eddy said goats are contracted usually in May-June and September-October, depending on conditions, and they graze about 35 acres out of more than 100 total acres of right-of-way property. 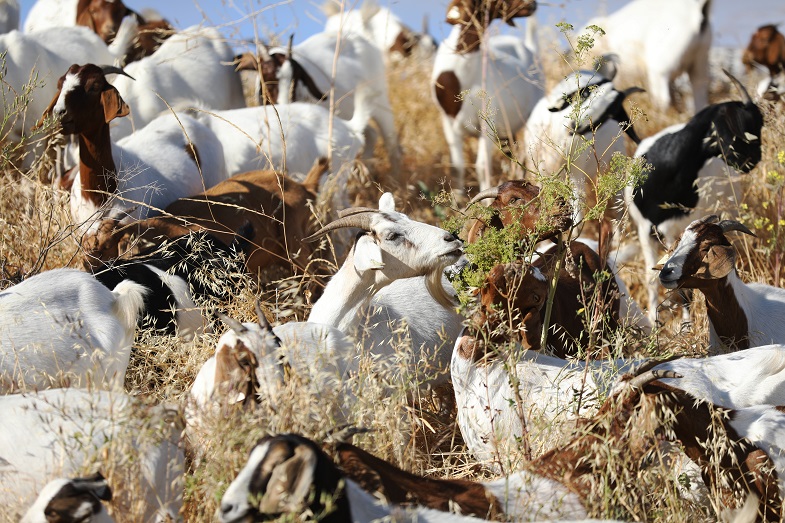 The contractor BART uses is Living Systems Land Management, a Coalinga-based family business owned and operated by Michael and Jan Canady. "We put the goats in a small area and do what we call a mob graze," Jan Canady said. "With a power weed eater, you're just cutting it down, but you have to worry about erosion, because the root is still there. The goats, they're constantly eating wherever they're needed, everything, until you move them somewhere else." 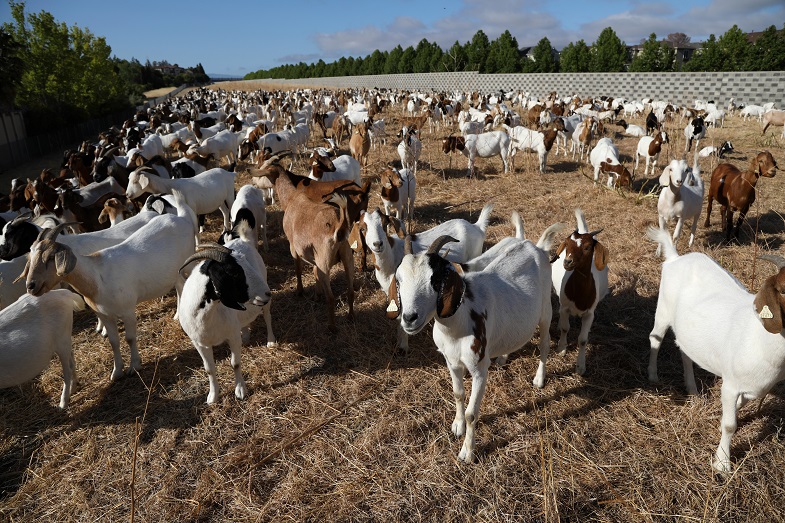 In Fremont, the goats had started their day on one parcel behind a fence until it was nearly bare. Some of them stood on their hind legs to nibble green leaves overhanging one side of the property (or to be handed leaves as a treat from their visitors). 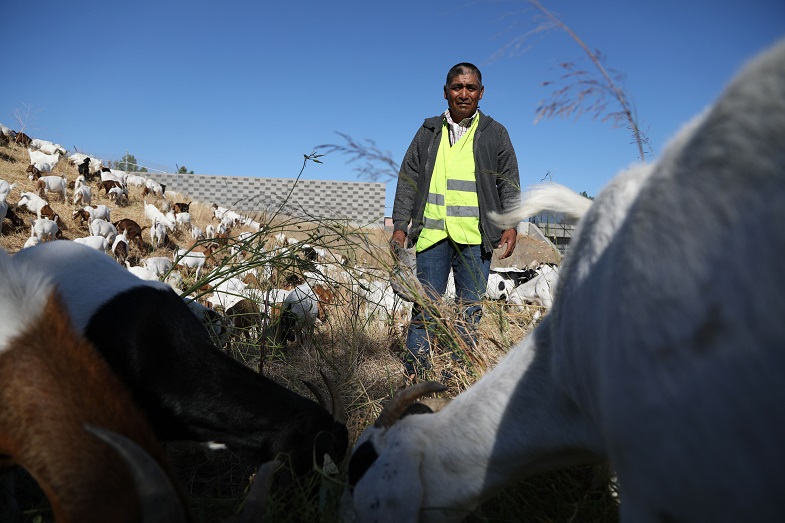 At each location, a goat herder contracted by the Canadys stays with the goats 24/7 to move them along to their next stop. On this day, herder Zenobio Ordonez, a Peruvian national, called out to the goats as he opened a fence and they stampeded into the new grazing spot. 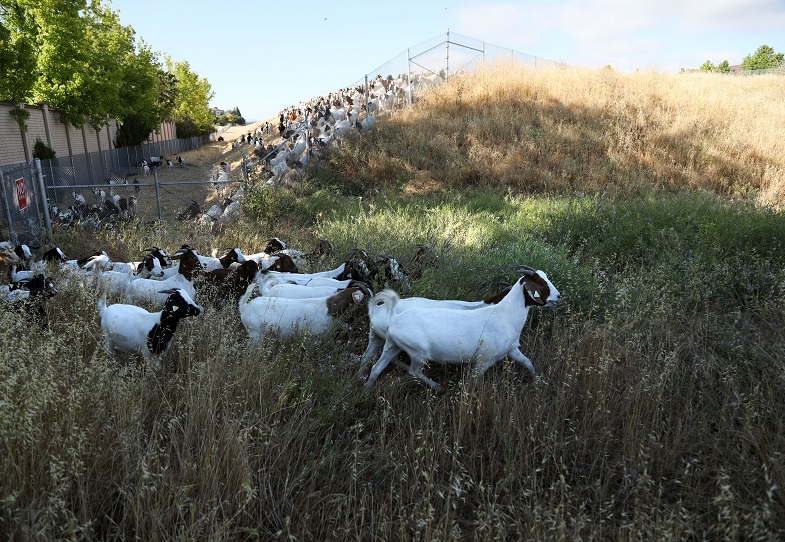 "Goats are active and explorative eaters, often climbing trees in pursuit of food and nutrition," Jared A. Lewis, Natural Resource Program Manager/Outreach Director for Living Systems, wrote on the company's website. "This propensity towards variety coupled with an uncanny ability to consume unlikely feedstuffs such as low lying branches, small trees, grasses, weeds, chapparal, shrubs and a panoply of fire-hazardous exotic and invasive species, creates the unlikely but nonetheless perfectly suited fire-fighting tool in the goat." 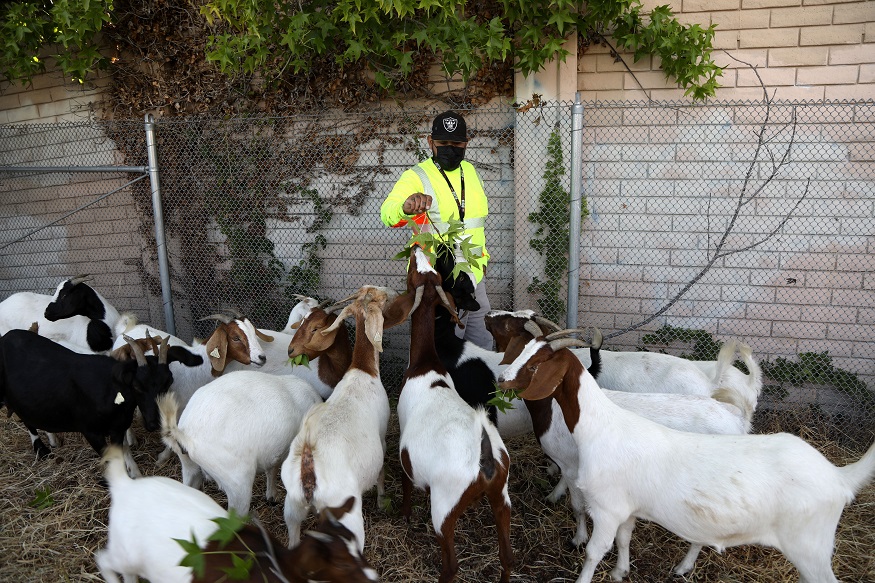 Ordonez and others of the Canadys' contracted herders are legally working in the United States on H-2A temporary agricultural worker visas. Brave goatherders and intrepid goats have been credited with creating firebreaks that saved multiple homes in recent years' devastating fire seasons, from Santa Rosa to the north to Agoura Hills in the Santa Monica Mountains to the south.

Contrary to popular culture, goats don't really eat tin cans, Canaday said, but they're intelligent, playful creatures who instinctively know which plants they need to eat. "The goats like to cavort, they jump and twist," she said. True to form in Fremont, some of the fiesty ones locked horns to head butt one another, and nosed around the BART worker who offered them a green leaf. 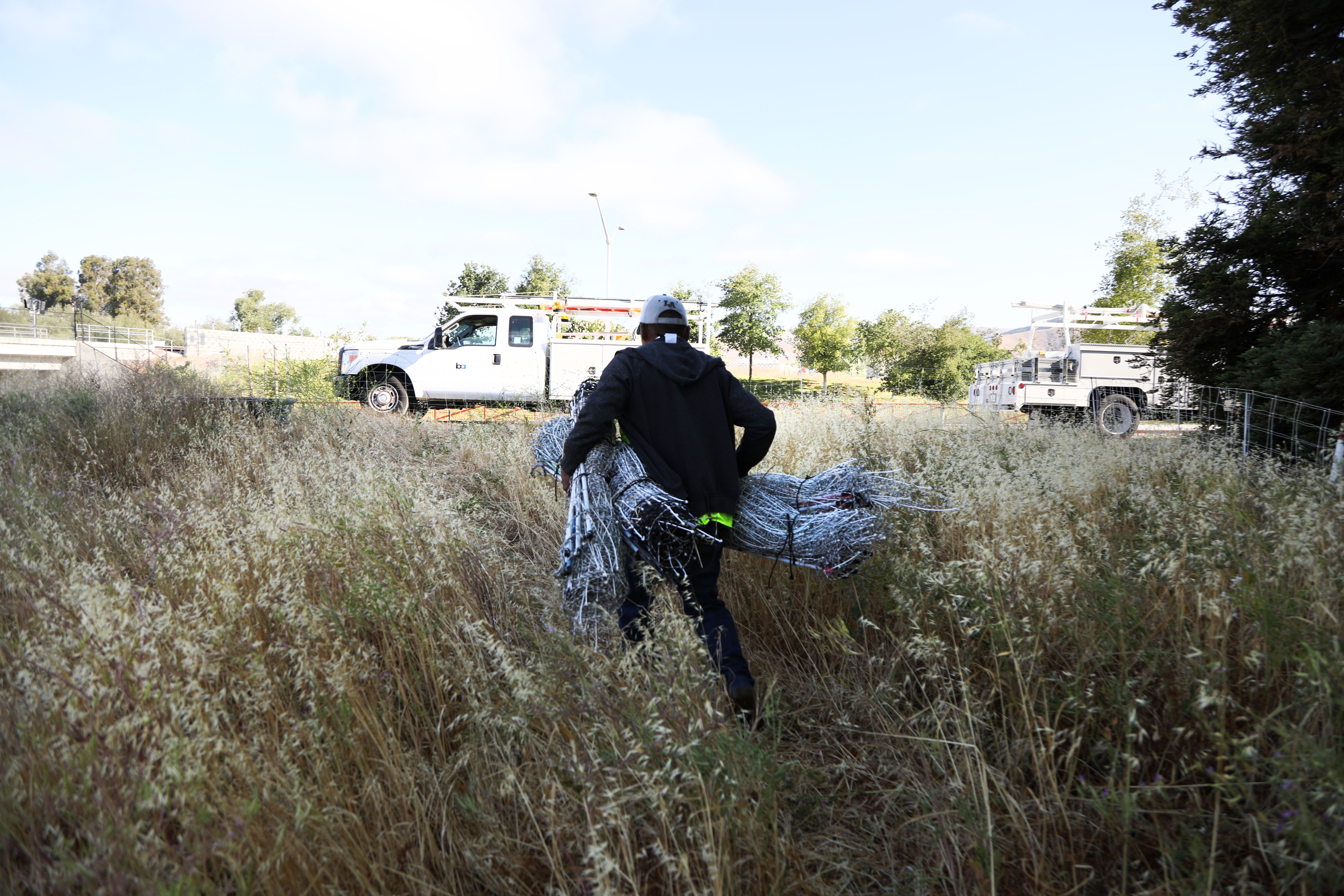 Ordonez explained that he was a machinist by trade in Peru, but grew up with goats and sheep on his father's farm. He earlier herded goats in remote parts of Nevada, which he described as a lonely existence, but he is happy with the proximity to people and places in the Bay Area. He came to the U.S. to help pay his four children's way through college and trade schools, and he misses his family very much but only gets to return to them every couple of years for a few months at a time.

He doesn't give the goats names or treat them as pets; they are livestock and hard workers who get the job done, he said.

With 4.2 million acres burned statewide in 2020, California experienced one of its most devastating wildfire seasons in modern history. Some of BART’s extensive real estate is in high wildfire potential zones and contains vegetated habitat. Due to climate change, increased precipitation in these areas during the rainy season may spur overgrown vegetation, which can dry out and serve as wildfire fuel during torrid summers. Uncontrolled wildfires pose a risk to BART assets and other nearby built structures, so BART proactively manages any overgrowth on its properties to help prevent fires from starting or spreading.

The goats also leave behind natural compost as they graze, further enriching the soil quality. 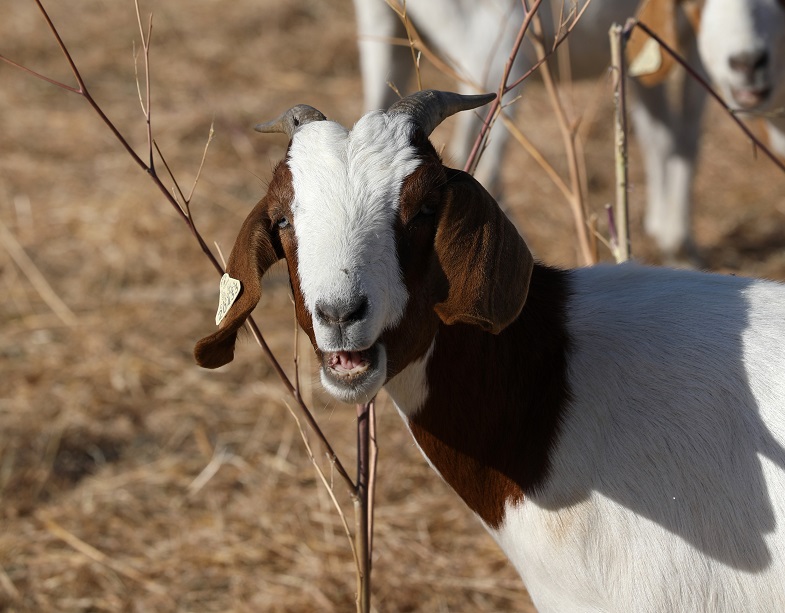 After their Fremont assignment, the goats moved on to their next job, grazing between Lafayette and Walnut Creek stations near Highway 24. If you're on a BART train and look up at the hills in that area, you might spot the brown-and-white spotted, lop-eared-looking four-legged firefighters that are helping BART with its broader sustainability efforts.