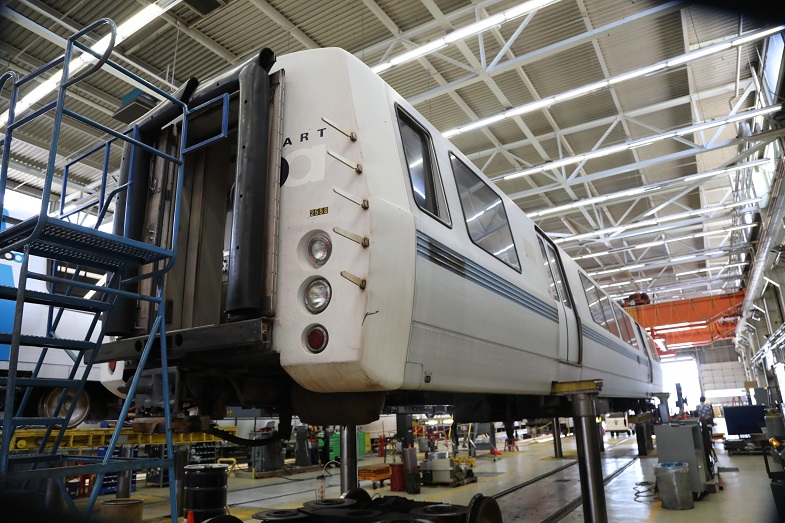 The last-ever BART C2 car was decommissioned in August 2021 at Hayward Shop. Note the headlights on the end as well as the flat-shaped front. The C2s could serve as lead car with an operator cab or as a middle car, which ushered in a new era of efficiency in dispatch operations when they arrived in the 1990s.

The last of BART’s most problem-plagued 1990s-era train cars, known as C2 cars, has left the building. The C2s had more than their share of issues affecting riders and workers and were strategically targeted to be the first cars in the legacy fleet completely decommissioned. The last one was scrapped in August.

C2s were the most likely to have HVAC breakdowns leading to hot cars and rider misery. The operator cab was cramped with failure-prone sash windows. Engineers and mechanics had to come up with do-it-yourself fixes for problems like overshooting windshield wipers and passenger doors that popped off their tracks, taking cars out of service and causing delays.

However, the C2 cars (and their close cousin, C1s, which are next on the list for fully decommissioning as BART replaces its fleet) had some important distinctions that made them significant in BART history. Because of their versatility to be placed anywhere in a multiple-car train, they ushered in the modern era of train dispatch efficiency. And riders knew them as the first to have a blue interior color palette, instead of the 1970s-vintage drab brown and orange of BART’s early days.

Before the C2 cars arrived in the 1990s, BART’s interior color scheme was a drab brown and orange from the original 1970s palette and trains had woolen upholstery and carpet, no longer the case. BART historical file photo

THE ABC’s of BART CARS

BART’s legacy fleet includes three series of cars, known as the A cars, B cars and C cars (C1 and C2), which are in the process of being decommissioned to make way for new Fleet of the Future cars.

A cars have the iconic slanted end for the lead car with the operator’s cab, and can only be used at the end of a train. B cars, known colloquially as “cattle cars,” can only be used in the middle of a train set; they don’t have an operator’s cab. C cars have been the switch-hitters of the BART fleet; they can be used as a lead car and have an operator’s cab, but they can also be set up to work as middle cars without an operator. (Lead cars at BART are called “trail” cars when they’re on the other end of the train set; the trail becomes the lead at the end of the line when the train reverses direction.) 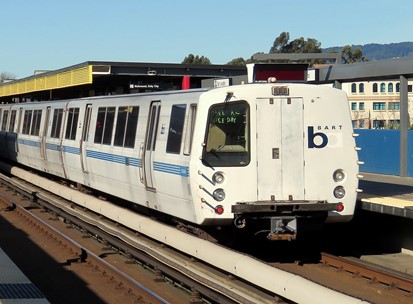 PUTTING MAINTAINERS TO THE TEST

Dave Hardt, BART’s Chief Mechanical Officer for Rolling Stock and Shops, said the C2s brought out the best in the men and women who maintain BART’s trains, pushing them to find ingenious solutions to myriad problems.

“Near the bitter end before the Fleet of the Future cars started arriving, there were a few days when I personally recall walking into Hayward Shop and literally every shop space was occupied by a C2 car,” Hardt said.

“When I think of the C2s, I remember the cab’s sash windows that had this crazy spring mechanism that was supposed to make it easier to raise and lower, but was very difficult to adjust and maintain; it would jam. Also, the windshield wiper, when it would rain, it would overtravel off the windshield and land on the side of the car, and not be able to swipe back the other way,” he said. Maintainers came up with fixes for both.

“We ended up retrofitting a bunch of the cars with a window we designed in-house, that worked much better and was easier to maintain. For the wipers, our engineers designed a bracket, a retaining clip, that kept them from overtraveling off the windshield.” 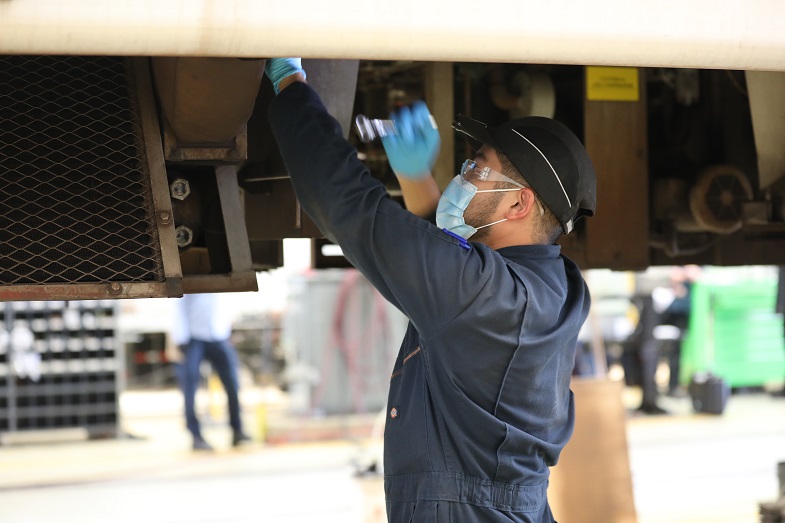 And then there were the passenger doors.

“Another specific to the C2 cars, our mechanics knew it all along, the door track and the guide that keeps the door on the track was an issue. We noticed in our analysis that door delays for C2s were far more frequent and more severe than for any other type of car. When a patron would force the door open or a piece of luggage or bicycle would get stuck, the door would literally pop off the track. Unlike other types of cars [with a lockout mechanism that would let the door be blocked off to keep the train moving and prevent delays], you couldn’t keep the train moving for safety reasons. After a lot of painstaking effort, one of our engineers came up with a replacement guide for the door, a Teflon guide that was similar in design to the one on the C1 cars, and we replaced them all.”

Another issue that affected overall performance of the C2 cars was the APSE system, or auxiliary power supply equipment, which takes the 1000 volt DC power supplied by the electrified third rail and converts it to AC power that keeps the air conditioning, compressors, and other control systems on the car running. “On the C2s you have an unreliable power source for literally everything on the car,” Hardt said. “Its performance was so intermittent and difficult to diagnose. When we had an APSE sitting in the shop uncovered you could see a bird’s nest of wire terminations in that thing. It was so difficult when it did fail to find out what had failed.” 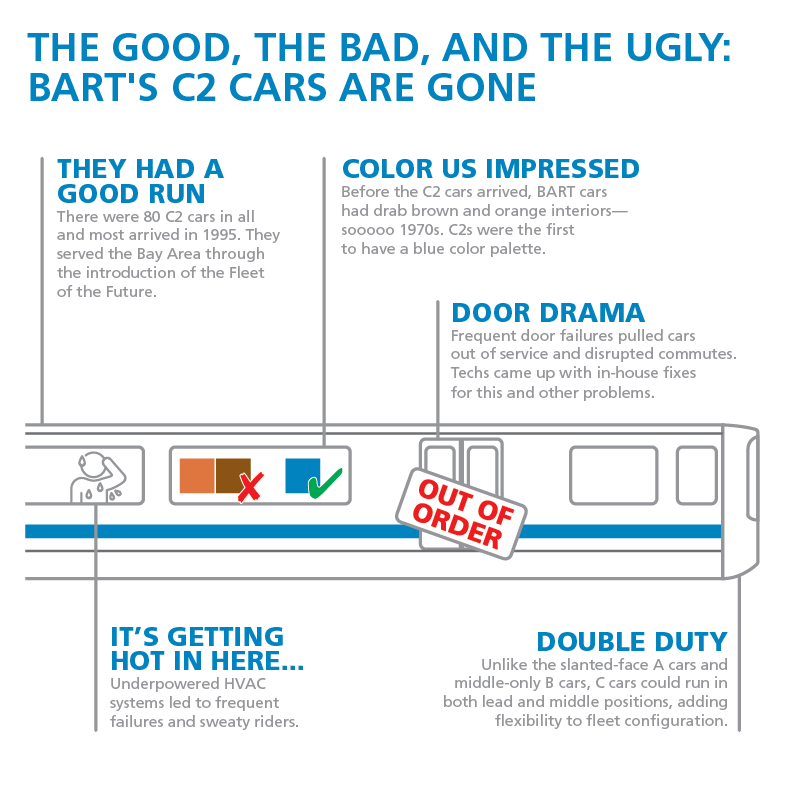 “We fixed what we could on them,” Hardt said. “There were some things that we couldn’t realistically fix within typical budgetary restraints. Once we were into the procurement for the Fleet of the Future, we didn’t want to overinvest in the old cars. So we ended up making incremental low-cost improvements.”

USHERING IN A NEW ERA OF EFFICIENCY

The C2s may have been bad news for maintainers, but they were instrumental in helping BART modernize and maximize efficiency of how trains are put together and sent out again from rail yards, ultimately benefiting the riding public by allowing BART to more easily match train length to rider demand at any particular time.

There were 80 C2 cars in all, and they arrived in the years between 1990 and 2004. The vast majority, 61 of those cars, arrived in the year 1995. (Image at right: Promotional button issued for next generation C2 cars in 1995; appears to be a stork “delivering” the new baby car.) For historical context, in the year 1995 when most of the C2 cars arrived, Bill Clinton was president, “Toy Story” was the top-grossing movie and “Gangsta’s Paradise” topped the Billboard music charts.

Paul Oversier, now retired, was BART’s Chief Transportation Officer during the time when most of the C2s were delivered. He arrived as CTO in 1990 from the New York City Transit Authority and became BART’s Assistant General Manager for Operations in 1999.

“In general the C cars were more complicated than BART’s original A and B cars because, among other things, they had to be able to function as both control and mid-consist cars,” Oversier said. “This flexibility ushered in a new era in BART operations. Previously, to resize the trains for lower ridership periods of the day, there had to be a short train waiting in the yard, ready to be dispatched to a terminal where the longer train would go out of service to the yard to be replaced by the shorted train dispatched from the yard. These were called ‘run cuts’ and were pretty inefficient because it required extra cars (the shorter train waiting in the yard) and higher deadhead miles as the two trains swapped. Putting C cars in the middle of course allowed one long train to be split into two shorter trains right at the terminal. This saved money, equipment and arguably improved reliability.”

“The last thing I would say, and this applies to just about every new car I’ve ever dealt with, it takes time to work the bugs out,” Oversier said. “BART’s car maintenance and car engineering department is really amongst the best in the business. The longer they have to own, operate and maintain a car, the better and more reliably it will run. That being said, the C cars, and in particular the C2s, had some inherent design challenges that negatively impacted their performance, no matter how good the maintenance.”

Interior of a C2 car in the days when there was wool upholstery; note the flip-up seat at bottom
left, which allowed the seat to be folded up to make room for wheelchairs. Photo via Wikimedia Commons, I, BrokenSphere, CC BY-SA 3.0 http://creativecommons.org/licenses/by-sa/3.0/

IN THE WORDS OF THE WORKERS

Perhaps the final word on the C2s comes from workers who maintained and operated them.

“I won’t miss coming to work and seeing a C2 in my stall,” said Ralph Sermano, a Quality Team Leader at the Hayward Shop, from inside the shell of the very last C2 car to be decommissioned. “It’s a high-maintenance car. I used to work on them a lot. I prefer to work on the Fleet of the Future cars. They’re cleaner; they’re easier to work on, and they don’t break down as much."

“They were very versatile,” said Vince Louie, Assistant Superintendent at Hayward Shop. “We did have a lot of problems with them, things like train control, that affect the lead car, the cab car with the operator. When the C2s had problems, we could just make them middle cars so we could bypass those issues.”

Paula Fraser, who is now an Assistant Chief Transportation Officer at BART, was a train operator back in the early days of the C cars.

“From the operator side, they drove us crazy,” she recalled, especially the cramped cab compared with  the A cars. “They were terrible on the taller operators. I’m 5-foot-2, but it was really tight for the taller people. Sometimes they’d have to turn a little sideways to fit.” 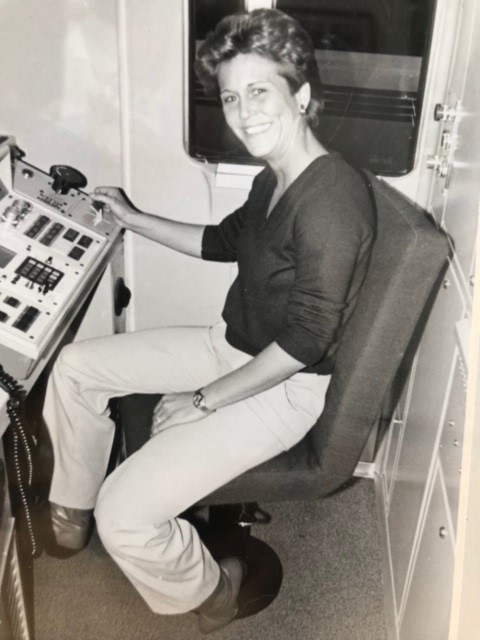 “Also, the cab doors weren’t aligned well. They were more likely to leave operators locked in or out of the cab. We would kick the door a lot. The official instruction we got was to ‘give an impetus of force to the lower part of the door.’ “

Fraser appreciated the versatility of the C2s in her later roles as a train controller in the yard’s Towers and in the Operations Control Center.

“We didn’t have to use as many operators,” she said. “We could keep yard operators in the yard doing the yard work. It saved a lot of time and made us more efficient.”

“It showed the excellence of the workers in how they kept those C2 cars going,” Fraser said. “What I’m proud of at BART is that we make things work. Little by little we modify and improve things. I’ve always been amazed at how all the workers come together and step up to challenges like the C2s.”

Willy Ten, a Vehicle System Engineer who has been at BART for four years, said maintainers had to rely on passed-down institutional knowledge to learn the C2s.

TIME FOR AN UPGRADE

“With the new cars, everything is brand new and digitized,” he said. “We’re no longer using laptops that are decades old. And one cool feature about the new cars is that we can wirelessly communicate with them as well.”

Michael Thomas, a Transit Vehicle Electronics Technician at Hayward Shop, has mixed feelings about the end of the C2s.

“I’m sad to see them go because I just got really good at working on them,” said Thomas, who’s been at BART nine years. “They were fun to fix. It challenged you to use your brain a lot more. But the good part is that we’re getting more up-to-date trains. I’m happy to see the new cars come. It’s time for an upgrade.”