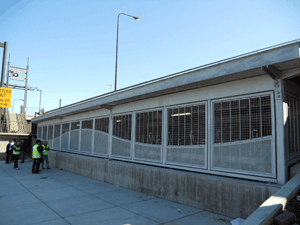 A fourth bike station has been added to the BART system – at Ashby Station – joining the others at Embarcadero, Fruitvale and Downtown Berkeley.

Bike stations, whether self-serve, valet-staffed or a combination, are just one option in BART’s efforts to accommodate bicyclists who wish to use the system. Read more about bike stations, how they work and what you need to do to sign up. Others options include bike racks, individual keyed lockers, shared electronic lockers – which are undergoing a major expansion – and the ability to bring folding bikes on trains at all times.

“One size does not fit all,” said Steve Beroldo of BART’s Access Department, and the staff liaison to the BART Bicycle Task Force. “We try to provide safe and secure storage, in adequate capacity, everywhere it’s possible.”

Secure storage is critical because BART does not have the capacity to allow bicycles on trains during peak commute hours and not everyone needs or wants to bring their bikes on the train, Beroldo said.

“It’s very frustrating to people not to be able to take their bikes on trains at all times.  As an alternative, we try to offer secure parking at the station,” he said. During peak hours BART has a bike ban to accommodate the crush of riders, and messages indicating “no bikes” during those times are flashed on the overhead electronic signs on platforms, as well as noted in BART brochures and online schedules. In addition, bicycles are never allowed in the first car of BART trains, in order to have a dedicated car with open space for riders with disabilities, and because that's the car with the train operator, who may need open space to move quickly in case of an emergency situation. Here are all the bike rules.

The new self-service bike station at Ashby should help -- it will accommodate another 128 bikes.  Ashby is already BART’s most popular station with bicyclists—almost 12% of riders use their bike to get to the station from home. 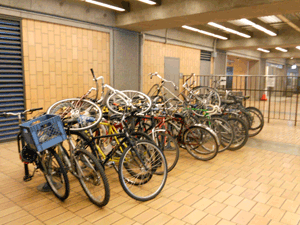 Racks at Ashby Station are often jammed beyond capacity

Speaking with a sampling of bicyclists at Ashby Station this week supported the idea that “one size does not fit all.”

“I would use a bike station if I didn’t need my bike for my job in the city,” said Andrew Bellouin, who noted that he is fortunate to be able to work a very early schedule starting at 5 a.m., which allows him to avoid peak commute bans. He said the new station will be a good thing for the bike community in general, however, because it increases the options. Another bicyclist, Larry Waskiwecz, said he is comfortable using a bike rack and had no plans to use the bike station. “I guess you might use it if you didn’t have a lock,” he said.

Bicycle commuter Decatur Sonenberg, who recently relocated from the East Coast to Berkeley and uses the bike rack now, said he will use the new bike station. “I think it’s a great idea,” he said. “Even with a heavy-duty U-lock, I worry about my bike” on an outdoor rack, he said. He noted that some bikes cost thousands of dollars, so the extra security of an enclosed bike station is welcome.

The existing three bike stations accommodate some 521 bikes. Embarcadero is a self-serve station, Fruitvale has attended valet parking and Downtown Berkeley is a combination of the two.

Most other BART stations have some form of bike storage as well, including shared electronic lockers at 14 stations. The electronic locker program got a big boost in February when the BART Board of Directors approved a contract that will greatly expand the program, with up to 1,000 more spaces to be added over the next five years. The first phase of the deployment (about 500 of the lockers) will add electronic lockers at 25 stations. In addition, there are bike racks, both inside and outside paid areas, at almost all stations. For full details on all the programs see the Bikes on BART page.

“Some people are comfortable with racks, and others prefer the additional security of a locker or bike station,” Beroldo said. “We want to provide as many options as we can to support people who ride their bikes to and from BART.”

If you have feedback about bikes on BART, you can contact Beroldo at [email protected] or attend a meeting of the BART Bicycle Task Force.