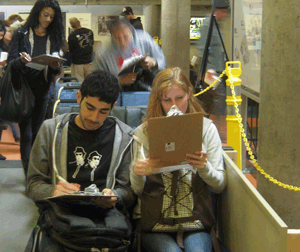 The calendar is being set for all of BART's mobile seat labs, where riders are giving feedback on what they'd like to see in the Fleet of the Future. The seat labs are just one of many ways BART is gathering public input on the project to replace its entire fleet of train cars, the oldest in the nation.

In addition, BART is collecting email feedback, with around 1,000 comments already received from the public. (Submit yours here) The seat labs already have collected around 500 surveys, with seven more labs still to come. See www.bart.gov/cars for the schedule of meetings.

The feedback will be shared with industrial designers, who will use it to come up with three renderings that incorporate the most-requested features and try to balance tradeoffs for the best possible interior design. Then, later this summer, there will be another round of public input on those three models. Based on that public input, BART will give design guidance to the company that ultimately will build the train cars. Five builders have submitted proposals for the job.

The seat labs so far have produced a wide range of feedback from diverse groups of riders.  At the Fruitvale BART Station in Oakland, for a seat lab held on May 1, commuters who take BART every day gave their feedback along with some who ride BART only occasionally. When the lab visited San Franciso State University on May 11, BART heard from students who rely on transit to get to school, as well as from others in the community.

David Abercrombie is not affiliated with SFSU but heard about the seat lab there, and as a regular BART rider from San Francisco decided to attend. "I thought it was very good," he said. "I enjoyed the chance to participate and be a guinea pig." Abercrombie said the seat lab got him thinking about the tough issues involved in designing new train cars.

"I was sort of in the middle" he said, on maybe shaving off an inch or two from BART's current seat width (the widest in the nation) to be able to increase capacity. But the seats shouldn't get too narrow, he said, because "people seem to be getting wider."  In the end, Abercrombie said, "you'll have to balance it with what your designers say," acknowledging that the public might have requests that aren't feasible from an economic or engineering standpoint.

Earlier versions of the seat lab sought comments from groups of riders with specific concerns, such as riders with disabilities, senior citizens and bicyclists. One version of the seat lab also was conducted with a control group of randomly selected riders, for additional research data to supplement that from public meetings. Results of that control group will be made public for an indication of how the research is going.

Why so much emphasis on public input?

"The Fleet of the Future will belong to the public," BART Chief Marketing Officer Aaron Weinstein said. "It has to be designed to meet the needs of BART riders. The information from seat lab participants will help us better understand those needs."  As an example, he said, "BART is hearing that customers want digital screens showing the next stop and other passenger information," so BART will be working to include this feature in the Fleet of the Future.

With regard to seat surfaces, early public feedback shows a bit higher ranking given to cleanliness than to comfort -- though people say both are important. That doesn't commit BART to any specific seat covering, however; instead it creates a mandate to find a surface that can be kept clean, above all, but without totally sacrificing comfort. Any surface material has to meet stringent standards for fire, smoke and toxicity.

One person who sent in email feedback, identifying themselves as a daily BART rider since 1979, made an earnest plea:

"Please recognize that BART's train cars need to be designed to accommodate all of us.  We  come in all sizes, ages, varying health statuses, speak many languages and use different means of transportation.   It must be possible to design  train cars that can comfortably meet everyone's needs."

That's the difficult challenge BART will try to meet with the Fleet of the Future project. Sign up to receive updates, or submit your feedback, at www.bart.gov/cars.