No ordinary fan: East Bay woman is A's BART Rider of the Game

No ordinary fan: East Bay woman is A's BART Rider of the Game 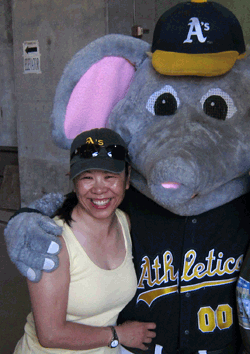 It was midmorning on a hot Wednesday, July 6, when the BARTMobile took the field at the O.co Coliseum in Oakland. Unprompted, and with no reservations, Melissa Wong leaned out the side to belt out her love for the stadium she was in, and the train that took her there. Shouting simply, “Go A’s, ride BART!”

The personable, energetic financial manager from an East Bay suburb was a natural A’s BART Rider of the Game. “I’m a big A’s fan and also a BART advocate, so it’s a combination of two great things,” said Wong right before her gaze fell on Stomper, the A’s fuzzy elephant mascot.  She hurried over to give him a hug.

The visit with Stomper and ride on the BARTMobile were part of Wong’s perks for being an A’s BART Rider of the Game. It’s a promotion running for five months during the season, with a different winner selected each month. (The BARTMobile is a little electric golf cart-looking vehicle decked out to resemble a BART train with an A’s hat for games. If a BART train had a child with Thomas the Tank Engine, the product wouldn’t look much different. It spends a lot of time riding in parades during the summer festival season.)

For Wong, BART is as essential to her transportation as baseball is to her entertainment. The combination of the two is natural for her. A longtime A’s fan, she thinks that “taking BART to the ballpark is an opportunity for people to think green, not stress about where to park, and BART will get them to the ballpark on time. It’s less of a hassle, and a way to introduce your kids to being green.”

Wong also takes BART to work every day, and noticed the A’s BART Rider of the Game promotion on her way home from work. Some of the monthly contests have had random winners but for July, a BART panel selected the winner from a caption contest. The challenge was to caption a cartoon showing a man and a boy in A’s fan gear, both pointing to a map of the BART system with an A’s logo in the middle.

She remembers thinking, “I bet I could do this, and by dinner I had an idea,”. Her caption reads, “Dad, do A’s fans take BART to the ballpark?” “Absolutely son, it is part of being GREEN and gold.” 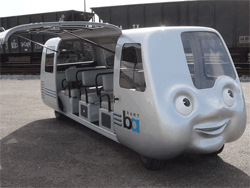 Wong's perk package included two tickets with early access so she could watch the players warm up and take her BARTMobile ride. Wong also got VIP seats so close to the action you could hear the bat crack when it connected with the ball, feel the pull of the ball when it sailed into the outfield,  sense the anticipation of the crowd when it looked like a foul might fall back to home plate, and see the pitchers’ shoulders relax when the umpire called strike. During the game, her face was highlighted on the scoreboard.

Wong grew up in San Francisco, but has been a fan since age 13 of the scrappy team that is affectionately called “misfit toys” in the upcoming Hollywood dramatization of “Moneyball,” Michael Lewis’ book  about the A’s, featuring Brad Pitt as general manager Billy Beane. (Watch the trailer for a glimpse of the stadium!)

"We have a longstanding relationship with the A’s, and this promotion is another opportunity to make BART more visible to A’s fans, and the A’s more visible to BART riders," said BART Marketing Representative Rebecca Wright. Every baseball season BART carries tens of thousands of A's fans to the Coliseum/Oakland Airport Station, just steps away from the game.

Wong says her favorite thing about the A’s is the fans. “They’re passionate. It’s not the quantity of fans, but the quality. Those who follow through thick and thin, those are the ones that keep me coming back over again.”

Screaming at the top of her lungs after Scott Sizemore sent a rocket into left field on his first swing of the game, wishing the players good luck by their first name as they took the plate, shushing me when I’d clap for Seattle’s Ichiro Suzuki (one of my favorite players), I think it’s safe to say that she’s one of those fans.

So what’s left for Wong now that her life has been completed by the riveting experience of being the A's BART Rider of the Game? “I need to see the A’s win,” she said. (And not just that day – they beat Seattle 2-0.) She needs a championship for her home team. “I need to see them take it all the way.”

There are two more chances to be A’s BART Rider of the game, in August and September. Details on the next contest will be made available in about a week. Go to www.bart.gov/fan for more information.