Community seat labs finish up; next step will be public outreach on renderings

Community seat labs finish up; next step will be public outreach on renderings 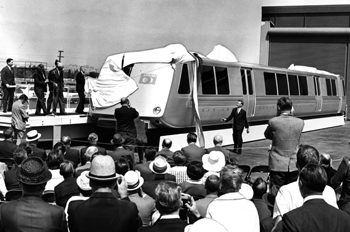 Past is prologue? Unveiling of first BART car, 1965. The public will
get a look at renderings for the next generation of BART trains as the
Fleet of the Future project proceeds.  Photo: Corbis

The seat labs are over and the results are in: Some 2,200 Bay Area residents put their tushes to the test by trying out one of 12 community seat labs over the past two months.

The seat labs, which began May 1 and ended June 30, are part of the public outreach on BART’s project to replace its entire fleet of train cars, the oldest in the nation, with the Fleet of the Future.

You can read more about the project and give your feedback at www.bart.gov/cars.

The community labs gathered feedback on six different design issues: seat width, armrest preference, seat materials, comfort vs. cleanliness, accommodation for bikes/luggage/strollers; and communications options for persons with limited English proficiency. Highlights of the community lab feedback in each of these areas were:

SEAT WIDTH
A large majority (75.6%) rated a seat width of 20 inches as acceptable, which would mean wider aisles and an easier time getting to the door to exit the train.  Customers, however, were less accepting of narrower 18 and 19 inch seat widths.  (BART’s current seats, at 22 inches, are among the widest in the nation.)

ARMRESTS
Seats without armrests were preferred by 39.2% of participants, but more than a  third, 36.8%, chose seats with armrests.

SEAT MATERIALS
Participants were given the opportunity to comment on various types of material, and the word “clean” was used 653 times in comments. A typical example was: “I prefer material that is easy to keep clean – material other than cloth.”

COMFORT VS. CLEANLINESS
Participants were asked to consider the tradeoffs between comfort and cleanliness with regard to types of seat material. They rated factors on a scale of 1 to 7 where 1 was “not at all important” and 7 was “very important”. Seat cleanliness was favored over comfort with an average mean rating of 6.29 for cleanliness vs. 5.20 for comfort, however clearly they are both important to BART customers.

ACCOMMODATIONS
Nearly half, or 48.7%, of participants indicated they would support removing “several” seats to make more open space for bikes, luggage and strollers. That percentage fell to 24.4% for removing seats to benefit only bikes.

COMMUNICATION FOR LIMITED ENGLISH PROFICIENCY
More than two-thirds thought BART should use pictograms, standardized icons that identify specific features such as elevators and restrooms.

The community lab results tracked closely to the results from surveying  a smaller, statistically selected sample of BART riders earlier. You can read more about that survey here.

WHAT HAPPENS NEXT?
The process to replace the Fleet of the Future is just gearing up. BART recently announced a partnership with DesignworksUSA, a subsidiary of BMW Group, to design the next generation of train cars. Based upon feedback so far, BMW Group DesignworksUSA will provide three interior renderings and one exterior rendering  of proposed preliminary designs for review by the BART Board of Directors and the public. Community meetings will be held to gather public feedback on the preliminary renderings. You will be able to find out more about the meetings and the renderings at www.bart.gov/cars. We’ll have a story there describing each one of the renderings in more detail once they are made public.

Based on all the input, BART will give design guidance to the manufacturer that ultimately will build the new train cars. Five builders have submitted proposals: Alstom Transportation, Bombardier Transit Corp.; CAF USA, Inc.; China South Locomotive and Rolling Stock Corp. Ltd (CSR); and Hyundai Rotem USA Corp. BART is conducting an in-depth evaluation of each proposal, and is tentatively scheduled to choose a supplier and award a contract later in 2011.

MAKE YOUR VOICE HEARD!
The public is encouraged to send feedback on the new train car project by email; submit yours using the contact form. You can also sign up to receive email updates on the Fleet of the Future at www.bart.gov/cars.