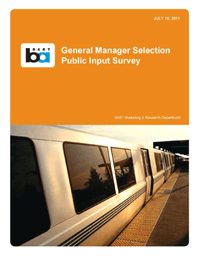 Providing reliable, affordable service should top the to-do list for the next BART general manager, respondents to a survey seeking public input told the agency.

When asked to choose a single most important task for a new GM, more than half (54%) picked "maintain quality service at an affordable price." And when asked what the GM's top focus should be, nearly two-thirds (64%) picked "operating a cost-effective, on-time service."

Of course, respondents had a lot of other tasks for that to-do list as well. In fact, one of the most common replies from respondents was that so many things are very important, they couldn't select just one.

Of the other survey choices for "most important task," 23% picked building trusting relationships with the community and others. There were a lot of open-ended, write-in responses as well, including a common theme of improving administrative efficiency/controlling employee costs. Of the other survey choices for "top focus," 30% chose "running a professional, efficient organization."

When asked to rate attributes or characteristics that would be important in a new GM, the most common choices for "very important" were:

About one-third (34%) of respondents added other suggestions in response to an open-ended question about qualities a new BART general manager should have.  When coded into broad categories, at least 10% of respondents mentioned:

Typical of verbatim comments was one respondent who wanted to see: "Someone who puts customers first. Works hard to create a convenient, comfortable and affordable system, so people get out of their cars and into the BART trains."

You can download the full report here (.pdf). A total of 819 respondents participated in the survey, including 430 who completed it on www.bart.gov and 389 who replied to a random sample email survey.

Sherwood Wakeman has been serving as interim general manager since April 23, 2011, the day after the resignation became effective for Dorothy Dugger, who had been the eighth GM in BART's history. A nationwide search is underway for a new general manager, who serves as the agency's top executive and reports to an elected Board of Directors.