How will BART's Fleet of the Future help ease crowding on the train?

How will BART's Fleet of the Future help ease crowding on the train?

BART into the future

BART is planning to replace its aging cars with a “Fleet of the Future.” The new cars will help keep BART running on time and lessen crowding on the trains. With gas prices spiraling through the roof, and increasing traffic, many drivers are turning into BART riders. In fact, BART ridership has reached an all-time high of 376,000 riders on weekdays as more and more drivers find themselves wanting to become BART riders instead of sitting in gridlock with nothing much to do except fume angrily while burning that oh, so expensive gas. 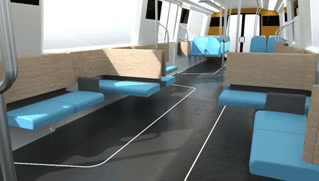 Meanwhile, it’s no secret that finding a place to sit on BART’s current crop of train cars can be challenging during rush hour periods.

BART is doing all it can in the short-term to accommodate our newest customers by keeping its train car in service with less down time for maintenance and repairs;.

But what does the agency have planned to help ease the crowding issues onboard the “Fleet of the Future?” Let’s BART into the future and take a glimpse of some of the preliminary design features BART is considering on-board the new trains when they start appearing after 2018:

For more information on BART's Fleet of the Future visit http://bart.gov/cars.