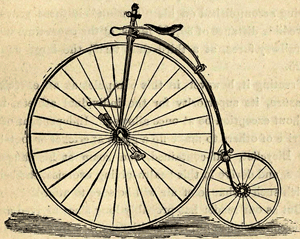 On a warm summer day in 1897, a young lady pedaled through the parks of Chicago. A “wheel craze” was sweeping the nation as tall penny-farthing bicycles gave way to chain-drive, smaller-wheeled “safety bicycles."

The young lady’s bike broke down, forcing her to walk two miles to the home of the friend she was visiting – who happened to be general manager of the South Side Elevated rail line.

That incident brought “to the attention of the management the necessity of providing accommodations for cyclists,” the publication Street Railway Review wrote at the time, recounted in  “The ‘L’ : The Development of Chicago's Rapid Transit System, 1888-1932,” a book by rail historian Bruce G.
Moffat, who is also manager of signage and wayfinding for the Chicago Transit Authority. 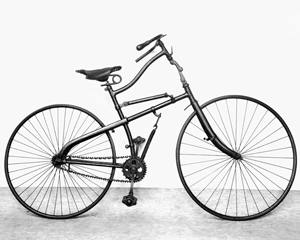 Photo of safety bike by Science Museum via Wikimedia Commons

BART takes a step in the evolution of its bike history with a pilot program starting Friday, Aug. 3, allowing bikes on trains during commute hours for every Friday in August.  New York City served as a model for designing the pilot, said BART Bike Program Manager Steve Beroldo.

IF YOU CAN MAKE IT THERE...

“If it can work in New York with 5 million trips a day to allow bikes during commute hours, we thought it was worth a try here,” Beroldo said. BART has around 375,000 trips a day.

Dan Mazzella, service delivery chief of staff for New York City Transit and self-described “born and bred New Yorker,” takes his bike on the city’s subway and said that, generally, cyclists and non-cyclists in the Big Apple have figured out how to ride together. “We have a history of making it work, even though we love to hate everything,” Mazzella said of his city’s famously brusque populace.

Beroldo, of BART, pondered one possible reason bikes-during-commute might work in New York: “My guess is New Yorkers help with the self-policing,” he said.

Mazzella said that's true, to an extent, because NYC subway riders aren’t shy about pointing out what’s not acceptable. “People call people out on everything here, not just bikes,” he said.  “We’re used to it.”

“The bike policy has kind of evolved,” he said. While bikes are allowed during commute hours, there are still various safety rules and regulations in place. For example, rules governing disorderly conduct specify riders cannot “commit any act which causes or may tend to cause harm to oneself or to any other person including, but not limited to riding a bicycle or straddling a bicycle while it is in motion.”

It wasn’t always all-access, all-times, for bikes in New York City, however, with the rules being refined and clarified over the years into what exists today, said Miller Nuttle, bicycle advocate with the organization Transportation Alternatives. Nuttle’s organization led a campaign in 1993 for expanding access; for more information you can read background on that advocacy, and review the group’s 1993 Bicycle Blueprint Action Plan.

Nuttle said New York's system works well from his perspective. "It's almost always a pretty easy endeavor" to bring a bike on board, even in rush hour, Nuttle said. "It cancels out a lot of the benefits if you can't bring a bike on during commute hours."

"There's always a learning curve when new systems are put in place," he said, but said he expected BART riders would adapt. "Biking, walking and public transit are all part of the solution," he said. "The better you can connect all three, the better a city can run."

Mazzella said that from his experience, it seems most people use courtesy and realize bikes are part of urban living and can improve the environment for everyone. One of the promotional campaigns for bikes on trains in New York used the tagline “Courtesy is Contagious.” 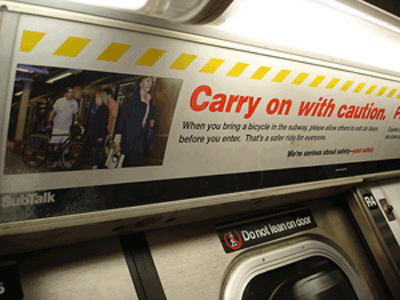 Photo of NYCT train poster by bicyclesonly via Flickr

“For a long time New York wasn’t really a biking city, but that’s changing,” he said. “It’s fantastic here that streets are becoming narrower and sidewalks are becoming wider. There are so many benefits to it. You see huge areas that are being made green, and a lot of it has dedicated bike paths. I find it really exciting.”

As advice for BART, he recommended that riders with and without bikes use common sense and keep an open mind.

“No matter what you do in New York somebody’s going to complain – we’ve always done it,” he said. “But even though people get frustrated, for the most part it works.”

Back in Chicago at the end of the 20th century, although the bicycle boom continued, the acceptance of bikes on trains was “apparently short-lived,” according to the book by rail historian Moffat. The reasons are not completely clear, but “certainly carrying a heavy and unwieldy bicycle up and down steep station stairways would have been challenging for all but the most athletic of riders,” Moffat writes.

In addition, narrow rail cars meant bicycles had to fit into very small spaces, even on the open-air platforms of rail cars then (similar to the open-air platform at the back of a San Francisco cable car). Other structural hurdles at the time, from long stairways, to inward-swinging platform gates on elevated cars, meant that “you had to be a fairly determined bicyclist” to take your bike aboard a train, Moffat said.

Bikes were allowed officially again on trains in Chicago in the 1990s, although there were and continue to be commute-hour restrictions.  Echoing the advice from New York City, the Bike and Ride Guide for bringing bikes on CTA trains urges, “Always be mindful of other passengers.”

Good advice for all involved as BART begins its pilot. If you ride BART during commute hours on a Friday in August and want to share your feedback, as a cyclist or non-cyclist, all input is welcome. Go to www.bart.gov/bikes starting Aug. 3 to complete a short survey that will be part of the data used to determine next steps.