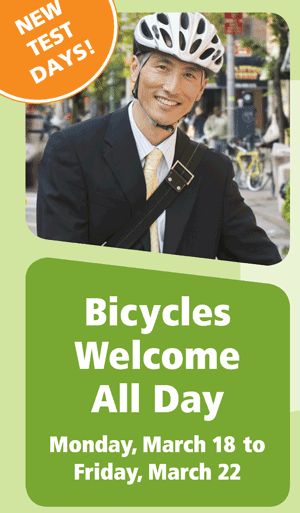 BART takes the next step in the history of bikes on board with a second pilot program the week of March 18-22 that will allow bikes on trains all day, including commute hours, with some restrictions.

“This is an important test because it will be a full work week during busy commute days, so we’ll get a look at how this works in ‘prime time’ conditions,” said Steve Beroldo, BART's bike program manager.  In an earlier pilot, on five Fridays in August 2012, peak commute “bike blackout” hours were lifted (other bike rules remained in place and will for the new pilot, including not allowing bikes on escalators or in crowded cars). That was a more limited trial because Fridays tend to be the lightest commute day, and August is usually lighter due to vacations. A report on the first pilot was released last fall.

“We’ve used the experience of the first pilot to make changes for this one, such as designating all three of the first cars on a train during commute periods as ‘bike-free’, so customers who don’t want to share space with bikes will have more options,” Beroldo said.

Also since that time, a full slate of initiatives to improve BART’s ability to accommodate bikes has begun to be implemented. For example, train car interiors are being reconfigured to create more space for everyone;  a bike etiquette campaign is continuing and expanding; and efforts are underway to increase secure bike parking, to name just a few.

BART's Bicycle Plan (.pdf) aims to make it easier to use a bicycle to get to and from BART, and has a goal of doubling the percentage of riders who access BART by bike from approximately 4.5% currently to 8% by 2022.

“Parking is at capacity, and other transit services are limited,” Beroldo said. “We need to get a lot more people to stations and bikes provide a friendly option.”

Most everyone agrees in theory that getting more people to bike to BART is a good thing, for clearing up congestion on roads, helping the environment, even for people’s personal health in increasing exercise. Yet BART trains are more crowded, with ridership at record levels, so the challenge is finding ways to accommodate bikes that don’t significantly disrupt the experience for others.

Alan Smith, vice chair of the BART Accessibility Task Force (BATF), said some seniors and people with disabilities have particular concerns. For them it is not only a matter of courtesy but of safety as well when entering or exiting a train if a bicycle is not properly positioned, he said.
Smith credited leadership from BART and local bike coalitions with efforts to promote bike etiquette and to fine-tune from the first pilot.  “If there is good behavior and everyone cooperates, this can be a win-win,” he said.  BATF member Janice Armigo Brown said other proposed changes, such as the creation of dedicated waiting areas for bikes on smaller platforms, will be important to put in place, and she remains hopeful it will be a success.

“Bikes can co-exist with BART riders,” she said. “They are environmentally friendly, quiet, and transport passengers throughout the San Francisco Bay Area to where they need to go.  Everyone wins with common-sense courtesy.”

BART Police Deputy Chief Ben Fairow said officers will be on their usual patrols during the bike pilot and that their first priority will be safety, making sure essential safety rules are followed so that cyclists and non-cyclists alike have a secure ride.

"We do expect an increase of people using bikes on BART during the pilot," Fairow said. "During the bike pilot week, we will have a heightened awareness of the fact that there may be some confusion about the rules. The most important thing is safety, and we'll be out as always working on that."
If any riders observe a situation where they believe there is a problem, the advice is the same as for other matters: For emergencies dial 911; reach BART Police directly at (510) 464-7000; use the train intercom at the end of each car to reach the train operator; or speak with a station agent, who can contact police. (Full BART Police Contacts list here.)

GOOD BEHAVIOR IN A RANDOM OBSERVATION

During a random observation two weeks before the bike pilot on a Rockridge Station platform, no one was observed boarding a blackout train with a regular bike during a period with some of the heaviest crowding, in the 8 am hour. Trains were standing room only, and even some riders carrying nothing more than a purse or backpack had trouble finding room to stand.

Steve Thompson waited with his bike to travel in the non-commute direction, which is already allowed under current rules. "I go the other way, so it's not a problem for me," he said. Still, he said, he's glad to see the pilot expanding because many cyclists commute in the busy direction during rush hour and would like to have BART as an option. “It keeps people out of cars,” he said.

A rush-hour rider traveling in the commute direction without a bike, who preferred to use only her first name of Caren, said her feelings were mixed.

"It's never really been a problem," she said, of her trips sharing space with bikes. However, she said that with increasing ridership in general, it will be even more important for cyclists to observe the rules and stay off crowded trains. "When you're talking about sardine-level crowding, there's no way that bicycles should be permitted," she said. "I am concerned, but this is a test program, so that's what it's for, to see how it works."

Justin Casey was boarding a commute-direction train with his folding bike, which is allowed at all times under current bike rules. He said he chose a folding bike partly to be able to follow the rules, and also because he’d rather keep his bike with him.

Even as a cyclist, Casey said he had some reservations about the pilot because he’s seen others with bikes -- not the majority but a few -- who don't follow the rules. "I'm kind of worried because you see some people trying to cram onto a crowded train, and it just makes it bad for everyone," he said.

While bikes are “never allowed on crowded trains,” under BART bike rules, knowing what is a “crowded train” is somewhat subjective, Beroldo acknowledged. Pointing at a San Francisco-bound train on the Rockridge platform where barely a shred of daylight came through among the people standing, he said there’s some basic common sense and judgment involved. “If space feels tight even without a bike, then clearly you shouldn’t be bringing a bike on,” he said.

Later this year, BART will also make it easier for everyone to tell which trains are likely to be most crowded with a new "crowding level" feature in the bart.gov website’s QuickPlanner for web and mobile web users. Based on historic data, the BART QuickPlanner will show crowding levels for each leg of a weekday BART trip.  “Although the data is not real time, the historic data we're using is generally predictive, and customers will be able to see which trips are less crowded than others,” said Timothy Moore, BART website manager.

PUBLIC FEEDBACK WILL GUIDE NEXT STEPS

Feedback from the public will be important.

“We will look closely at the results of this second pilot and at the feedback received in the survey,” Beroldo said. “We’re very interested to see what people experience doing this test in non-vacation, all-week conditions, and we encourage everyone to give us their comments.”

The survey will be live at www.bart.gov/bikes starting on the first day of the pilot, March 18. In addition, other feedback on bikes can be emailed to [email protected].  The results of the second bike pilot will be presented to the Board of Directors at a future meeting, with opportunity for public comment, before determining what happens next.