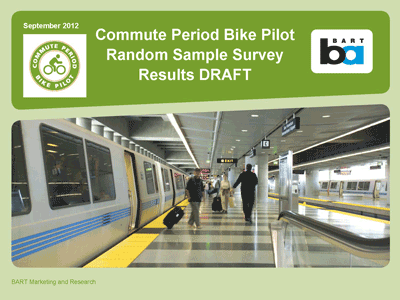 Currently, there are bike blackout periods of about two hours during peak weekday commute times in which bikes are not allowed on some trains. Any proposed changes would need to go to the Board of Directors for consideration.

“The survey results provide valuable insights into the experience of BART riders, both cyclists and non-cyclists, during the pilot.  This information will guide the discussion as we move forward” said BART Bike Program Manager Steve Beroldo. The results were discussed in a debriefing session with BART staff, the BART Accessibility Task Force, BART Bicycle Task Force, and the SF and East Bay Bike Coalitions on Sept. 26.

For information on methodology of the survey and to review the complete results, download the BART Marketing and Research Survey (.pdf) presented on Sept. 26.

The public will have an opportunity to discuss the results when the BART Bicycle Task Force has a meeting on Monday, Oct. 1, at 6 pm.

The pilot program also provided valuable lessons on how BART can better accommodate bikes during the busy commute periods.  Some areas under consideration include:

The bike survey is now closed. Feedback on any BART issue may be given through BART’s comment form at: www.bart.gov/comments