What do these cases have in common? They all resulted in domestic violence arrests, and in the suspects being issued prohibition orders keeping them out of the BART system. The message: Domestic violence happens everywhere, including on public transit, and BART Police are taking it very seriously and using a new law to help keep batterers away from their victims.

The recent high-profile discussion around domestic violence in the NFL has thrown the spotlight on an issue that in years gone by was dealt with in shadows and whispers.

BART Police, following California state law that is stricter than in many other states, train specifically on how to handle such cases. The key to understanding the issue is that domestic violence can happen across all societal lines, and in all places. Transit systems, in some ways, are on the front lines.

"We do domestic violence training on an ongoing basis, and officers take it very seriously," said Lt. Tyrone Forte, who led the BART implementation of a state law, AB 716, allowing BART to issue prohibition orders for serious offenders that ban them from the transit system for a period of time. 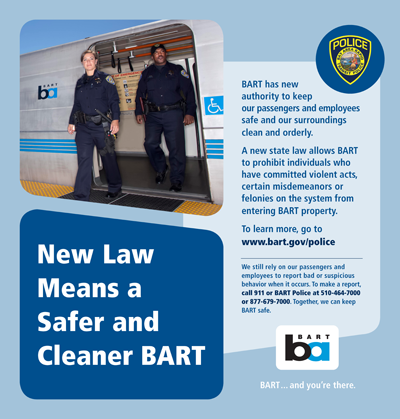 "The main focus of that law was to protect the safety of our customers and employees," Forte said.

That law has been implemented for nearly 18 months now on BART. "What we saw, as we looked at the numbers, was that domestic battery was the single highest category of crime that we were issuing prohibition orders for."

From May 6, 2013, when the implementation took effect, through Sept. 15, 2014, a total of 339 orders were issued -- 74 of those for domestic battery. The next-highest types of crimes were 64, battery or threats to riders, and at 42 each, battery or threats to BART Police officers and to other BART
employees.

Forte noted that one factor in the high numbers for domestic battery could be that BART is often used as a neutral site for child custody hand-offs between separated parents who may be already inclined to be hostile to one another."BART is a transportation hub, and even those who don't have cars can get
there via transit, so the mother and the father will often arrange for a custody change at BART," he said.

When looking at data for all domestic-violence-related crimes -- even those that may not result in prohibition orders, such as for contempt of court for violating probation on a domestic violence crime --  the numbers are also on the rise.

"Domestic violence is an issue in our society, and it spills over to BART," he said. "There's something that is brewing, and there is hostile energy, and it makes a potentially volatile situation."

Sandoval said he feels it's important to talk about the issue so people facing it will know they are not alone and they can come forward for help. "We need to demystify it and not give it any power," he said. "We want to empower the victims. The number one feeling I've seen in group counseling sessions is that people feel they're the only one, that they can't speak up."

BART Police Training Sgt. Carolyn Perea demonstrated one of the domestic violence-specific trainings that officers go through, an award-winning interactive virtual reality-type program that lets them take a dispatch call, go to the scene of a role-played incident, conduct an investigation and write a report. They are tested on key points from their familiarity with the law to their observation of body language during interviews.

Perea, who has been in law enforcement since 1991 and used to be a patrol officer, said there has been a shift toward taking domestic violence crimes more seriously.

For example, in California, it is not necessary for the victim in a case to ask to "press charges," and often, for complex reasons, they do not. The officer determines the "dominant aggressor" in the situation where there is violence between parties in a married or dating relationship, and the law requires that person shall be arrested.

ARREST, EVEN IF VICTIM DECLINES

That was the case in the Bay Fair instance, where the victim declined to pursue an emergency protective order against her abuser and declined to receive victim assistance information. BART Police always have materials at hand that will direct victims to shelters, emergency counseling hotlines, and
domestic violence crisis centers.

Despite the victim's not wanting to press any charges, an arrest was made, nonetheless, as is required under state law.

"When you have these situations, tensions are already amped up, and de-escalating is a key factor," said Lt. Paul Kwon, who is in charge of Zone 3, where the above examples happend. "Another challenge is that the parties often give different accounts of what happened, and a lot of times that's all we have to rely on. That's why it's so important for the public to know that, if you witness this, call us, be willing to give a statement."

Kwon noted that the public can also use the newly launched app BARTWatch, which allows riders to text the police discreetly when something is happening. "It's better if they are willing to give a report, but even an anonymous tip is better than nothing to alert us to these crimes," Kwon said. "We can't be everywhere at one time so we need the public's help." 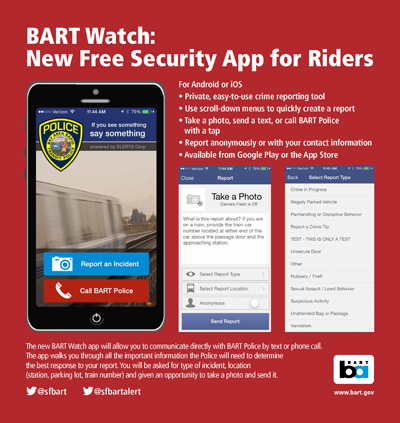 Officer Catherine Lahantas is newly hired to BART Police but previously was a detective in a domestic violence unit where she investigated hundreds of cases. She is known for expertise in the field. "Domestic violence leaps all boundaries, so we would expect to see it in a transit system, too," she said.

Lahantas said another one of the difficult aspects to this issue is its long-term nature.

"It usually takes about seven times (for violent disputes) among the parties before it's reported to police," she said. "So the tensions have been building for a long time. We describe it like an iceberg, where we are just seeing the tip."

The state law on prohibition order is a pilot program that will end on Jan. 1, 2015, unless it is extended. BART has gone back to the Legislature in support of a measure to extend it; that legislation, SB 1154, authored by State Senator Loni Hancock, would extend it to Jan. 1, 2018, The bill has been passed by both houses and is on the Governor's desk. He has until the end of the month to sign it. The bill also clarifies that BART Police can issue Emergency Protective Orders for individuals in a domestic violence situation and can confiscate weapons while investigating a domestic violence incident.

Carolyn Thomas-Russell, executive director of A Safe Place, a domestic violence shelter and counseling center in Oakland, said BART is moving in the right direction. "I think zero tolerance, and banning perpetrators who commit these crimes, is critical to send a strong message that is long overdue," she said. "It really helps when a workplace or institution creates a safer environment for its customers and its workers, it sets a tone, and that is what BART is doing." For more information about A Safe Place, go to their website, http://www.asafeplacedvs.org/

HOW YOU CAN HELP