Gearing up for this year’s Independence Day festivities? Don’t let the star-spangled dazzle catch you off guard – always 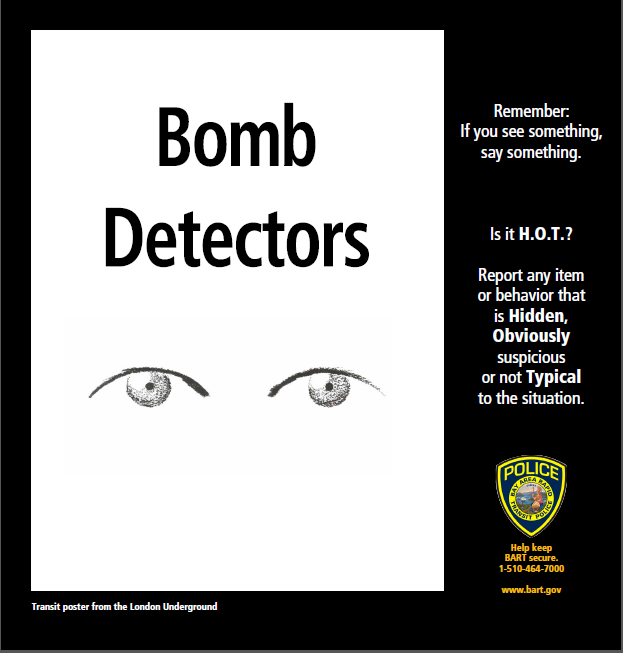 remain aware of your surroundings.  Observe some common sense, basic safety tips so as to keep yourself and BART safe from vandalism, theft and threats this coming weekend.

The key to disrupting the disruptors is early detection of suspicious activity, and no one is better at detecting an out-of-place situation than passengers and employees.  Do you see a car without a driver illegally parked in front of a station, or a driverless truck pulled up next to the tracks? Don’t keep it to yourself – let BART know.  The same thing applies to abandoned packages/luggage, individuals engaging in drug use or sales, or people carrying suspicious packages inconsistent with other transit patrons (e.g. fuel cans, items with exposed wires).

BART encourages riders to employ a vigilant ‘better safe than sorry’ mindset; all reports will be reviewed and acted upon if deemed necessary.   The BART Police Department has provided to the public a variety of options and methods to ensure your concern gets to the right people at the right time.

For example, you should never hesitate to contact BART Police at 510-464-7000 (911 for emergencies).  Passengers may also use the BART Watch smartphone app, or simply reach out to a nearby Station Agent, Train Operator, or other BART employee.  Remember, if you “See Something, Say Something,” no matter how insignificant it may initially appear.  Have a safe and happy Fourth of July weekend!