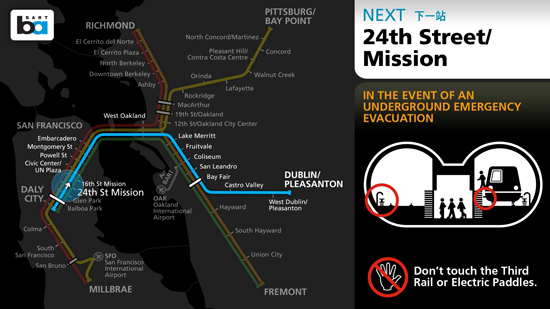 Sample of what upgraded, 2nd-generation LED screen on trains could look like; note features including highlight of line, "you are here" bubble, pictograms, emergency message and translation for "next" stop.

You know the feeling. Early-morning BART commute, you're zoning out, the train slows and you momentarily panic: Is this my stop? I can't see a sign, and I didn’t hear the announcement. Some stations look a lot alike. Do I rush off here? Stay on until the next stop? Ask a fellow passenger?

CHANGES BASED ON PUBLIC FEEDBACK

Paul Oversier, assistant general manager for operations, told the Board at its March 24 meeting: “These changes resulted from the feedback that we got from the public when we took the mock-up of the new rail car around the region to get public feedback. The changes are a direct result of that feedback.”

John Garnham, group manager for new vehicle procurement, gave a presentation about a passenger information system much more robust, flexible and dynamic than the first-generation proposal.

The upgraded, second-generation system has  27-inch LED screens located at each of six passenger door areas (three on each side) with much greater functionality. “The new features include a full LED map. It has a pulsating ‘You are here’ circle. It shows the upcoming stations highlighted while the ones you have passed are dimmed.” Also the “next” indicating the next station name is translated into four other languages, and universally recognized pictograms are used in place of text in many cases.

In addition to these features, there is a new capability for real-time announcements on the LED screens. “Central control can take over the full screen if there is an emergency and blast an emergency message out to it,” Garnham said. That abilty will be dependent at first on the location of the train at the time, until the technology is in place ultimately to reach the screens throughout the entire BART system.

The Board authorized $4.2 million for passenger information upgrades, which remains within the price tag for the $2.3 billion project that is on budget and on schedule overall. As a whole, the Fleet of the Future is the largest single expenditure for any project since BART was first built half a century ago.

The new trains will have a standard, prerecorded announcement system. Volume can be adjusted according to the conditions, and the words should always be clear, consistent and audible, a major improvement for the visually impaired. (Key information inside the trains and stations is in Braille, as well.) And for the hearing-impaired, testing is planned for an induction loop system that transmits information directly to receptive hearing aids and cochlear implants. It could be used on all the cars if it performs well.

The second-generation features involved in the upgrade could save BART a lot of time and money, resulting in better performance for customers.

ROOM TO GROW AND CHANGE

“We also get the software and the tools necessary so if we want to make future changes to it, we’ll have the ability to do that,” Garnham said. “We can modify it ourselves; we won’t be dependent” on outside companies for help.

On the outside of the trains, too, information will be better. On the sides and front, LED signs showing the train destination and the color of the line will guide passengers. For example, the side of a train could show a green block of color along with the word Fremont. If you looked at the BART map and knew you needed to take the green line to Fremont, you could tell it was the right train from that easy visual cue.

EMPHASIS ON LINE COLOR
Color-coded systems are common all over the world. On Boston's "T," for example, a cursory glance shows you that the Red Line goes to Harvard Square and the Orange Line goes to the Back Bay. The lines are known by their color, not their destination.

The BART system thus far has focused on end-of-line destination names (such as "the Fremont line"), because trains are broken up into different car sets throughout the day to meet sizing needs, and it has been impractical to reassign static color panels to each one. Now, with the new trains allowing for electronic color signs that can be instantly and easily changed, it makes sense to bring color back into the picture for line identification -- although end-of-line destination names will remain in place as well so that people get on the right train. For example, Yellow line to SFO vs. Yellow line to Pittsburg/Bay Point.

The design phase of the project is now finished with the vast majority of design decisions having been made, based on public feedback and system needs. More than 35,000 people participated, said Aaron Weinstein, chief marketing officer. You can read more about that or comment at www.bart.gov/cars. 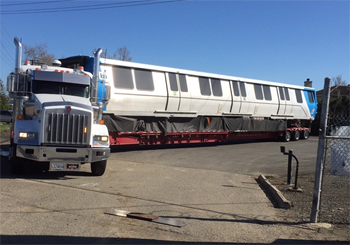 The first new rail car arrived in Hayward on March 15, 2016 (image at right). It will undergo months of rigorous testing before being put into passenger service, a target date of December 2016 if testing goes well and no major re-engineering is needed. Key to safety and success of the new fleet will be the initial quality assurance, system integration and safety tests that will take place before the California Public Utility Commission gives its blessing for passenger service.

At the March 24 meeting, Board President Tom Radulovich asked that Garnham return to a future meeting to give a presentation on “how you plan to use these new features that the trains are going to have,” so the public can be informed by the time they begin riding on the new trains. You can sign up to receive Board of Directors agendas, or watch meetings via live-streamed webcasts, at www.bart.gov/board.

The Fleet of the Future is one of BART’s “Big Three” projects to address infrastructure – which also include a new maintenance facility for upkeep of the new, larger fleet, and an upgraded train control system. It’s all part of the effort to build a better BART, which also includes replacing old rails, purchasing new maintenance equipment, modernizing old stations and much, much more.

BART has 775 new train cars on order, but the goal is to find the funding to bring that number up to 1,081 -- which would increase the overall number of seats in the fleet by 49%.

The 775 cars will arrive in the Bay Area in stages from 2016-2021, with 10 test cars arriving in 2016 and an additional 54 cars arriving in 2017. BART will begin to retire the aging cars when appropriate, paying close attention to ridership needs and safety.

Some of the first-generation cars off the production line will not have all the passenger information features listed here; however, later cars will come with the features built-in, and the earlier-built cars will have them gradually added in over time until all the cars have them.

Download information on the Fleet of the Future project that was presented at the March 24, 2016 Board of Directors meeting.