Drought-tolerant yarrow waves in the wind at Richmond Station

Plantings of drought-tolerant California natives like yarrow, lantana, and Western redbuds greet visitors with a soothing pastel palette outside Richmond BART, an example of sustainable landscape design to be incorporated in other station area plans going forward.

“California is in a drought still, and anything we can do to reduce our water usage hugely increases sustainability,” said Scott Smith, BART’s staff architect for the landscape project at Richmond. “It just makes sense.”

Some of the practices initiated at Richmond have literally been written into BART’s facility standards manual, so Richmond is setting the standard for other projects to come. The station, an important intermodal hub connecting BART with a multitude of buses and also with Amtrak, features a progressive, environmentally conscious design that enhances not only the station itself but the surrounding community as well. 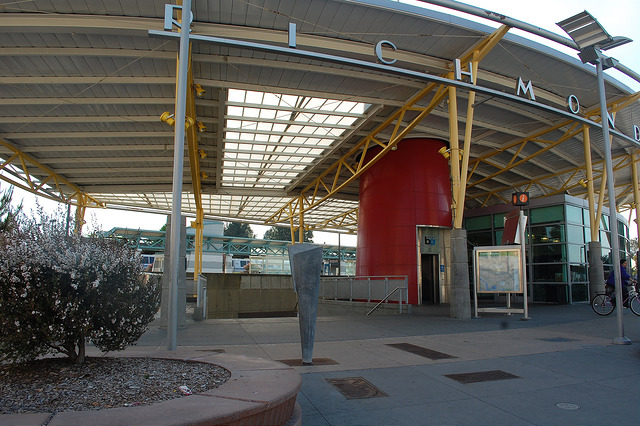 Among the improvements at Richmond Station:

On a sunny day walking to the parking garage from the station, the space is illuminated with pink, white, and yellow flowers in summer bloom.  With the drought affecting how people in California think about water conservation, BART emphasized water efficiency in landscape design decisions.

Using native plants, the station features trees and shrubs that are adjusted to the California climate, making them durable and low maintenance as well as a beautiful part of the natural environment.

Some of the plants such as yarrow, goldenrod, and coffee berry, are also biofiltration plants that break down and absorb pollutants naturally, while Western redbud trees and lantana flowers brighten the atmosphere. 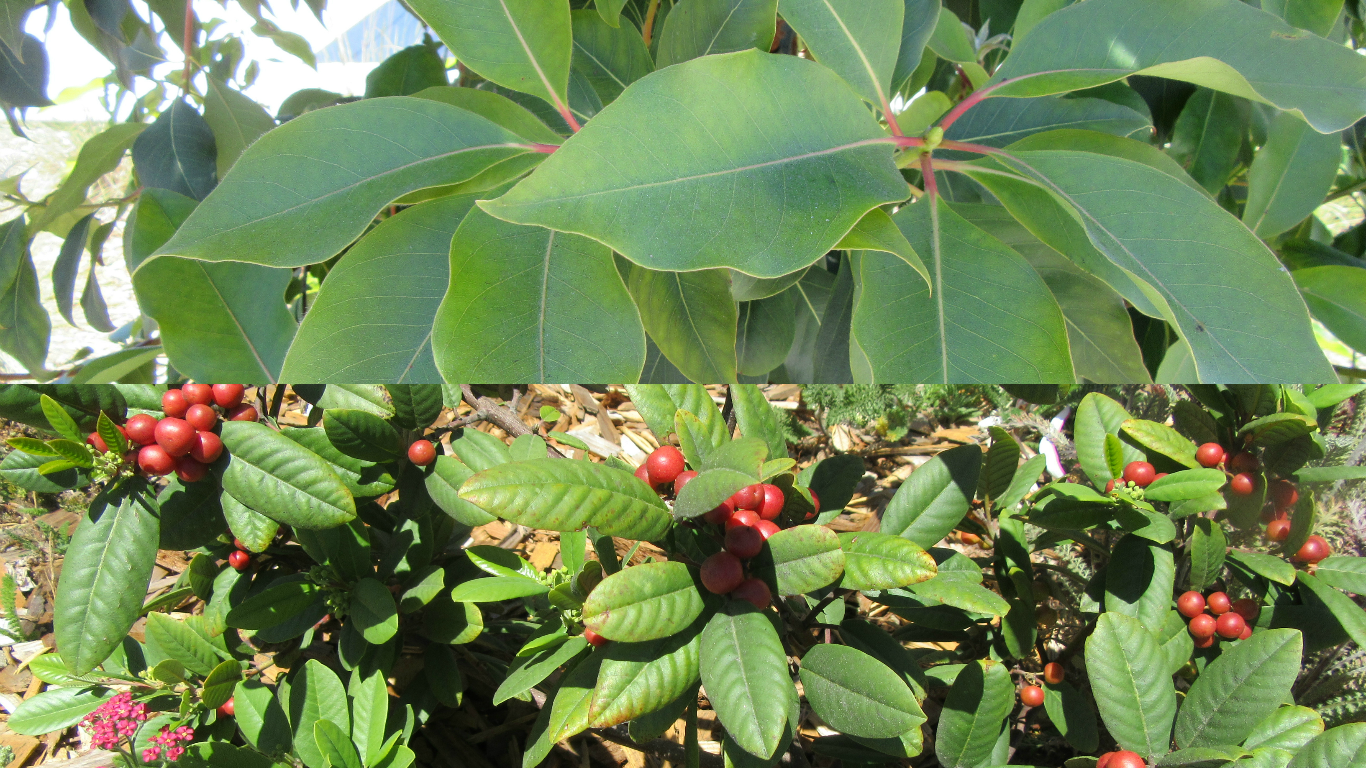 Shown above are the Brisbane Box tree and Coffee Berry bush, drought-tolerant plants

“The plantings are selected for drought tolerance, minimal maintenance and for beauty” said John Potis, landscape architect for contractor Merrill Morris Partners on the Richmond project.

Since native plants can thrive in their natural climate, they “will assist in creating a healthy soil through the use of organic compost and no reliance on chemical fertilizers, herbicides or pesticides” he added in a narrative describing the project.

Potis said that Richmond maintenance crews were happy with the vibrant color selection and the lack of exposure to harmful chemicals when on the job.  According to Potis, this station sets the general standard for maximized independence from herbicides/pesticides.  He calls Richmond “a new beginning for BART station landscape”. 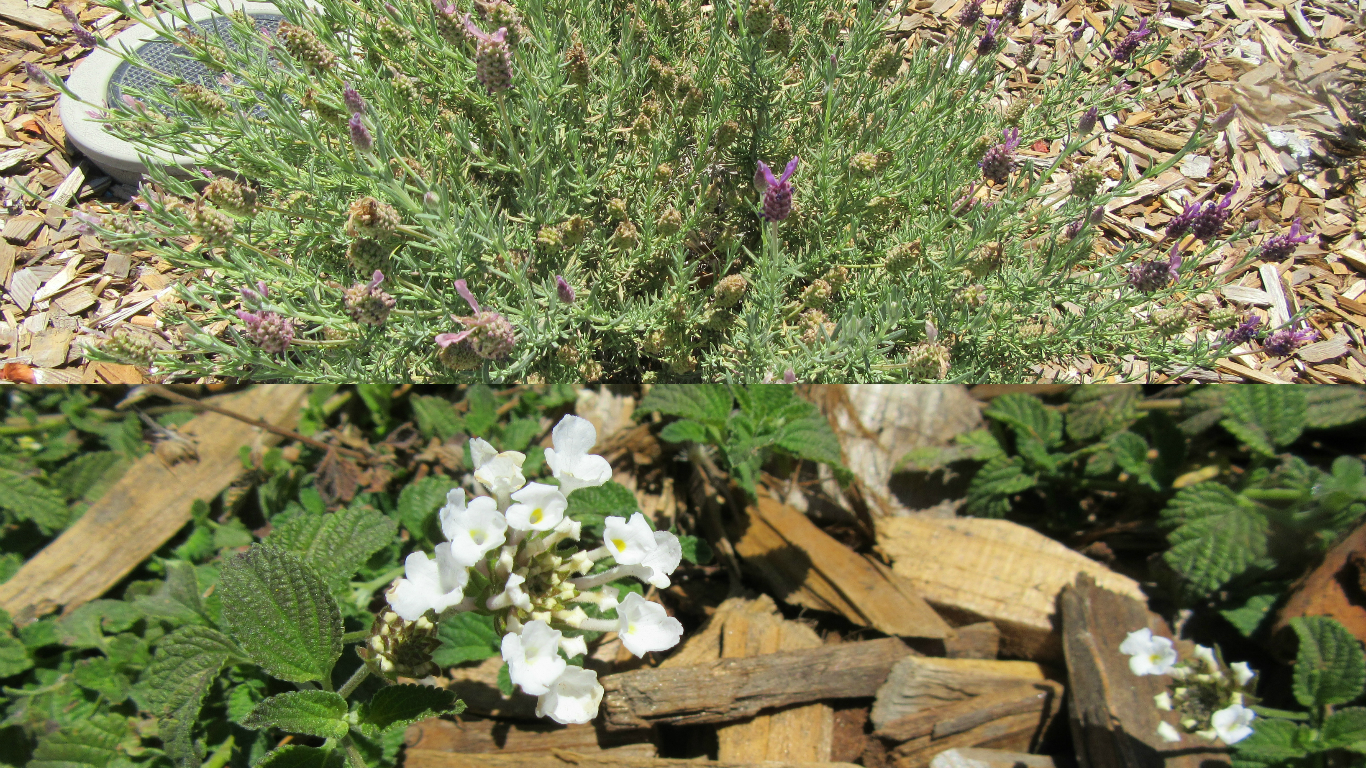 Fragrant lavender, top, and white lantana are among the plantings at Richmond

For BART this means a more sustainable, efficient landscape system. For riders like 69-year-old Julia Spikes, on her way to Stockton via Amtrak, it means a “better looking space” for people to wait for the bus and enter/exit the station, as well as cleaner air and water.

Julia’s vision for her community reflects the goals of the newly adopted Transit Oriented Development (TOD) Policy, which includes a Sustainable Communities Strategy as one of its many goals for BART.

Producing vibrant flowers, the native plants also attract local pollinators, such as bees and butterflies, that exist in the natural environment and form an integral part of our insect community.

Native plants attract local pollinators such as bees and butterflies

Jaime Steffan, Richmond station agent, said he takes pride in the fact that BART is doing its part for the environment, the same as he does his personal life -- “I’m very conscious at home to save water,” he said, an attitude shared by many BART employees who try to conserve water, even at their work sites.

The drought-tolerant natives are designed to be irrigated for the first few years to establish themselves and then transition to complete independence of irrigation.  With new satellite adjustment technology, personnel will be able to adjust the irrigation without even being on site, said Smith.

When it rained in Richmond, before the station area improvement project,  the water would sweep potential pollutants from the streets, forming puddles to dodge and pools that would pour into the storm drains leading to the bay.  However, now, on a rainy day, when rushing to your bus stop under an umbrella, you can walk on what should be a largely puddle-free crosswalk, while what used to be a river of rainfall disappears into planters with low lying-drainage to collect and filter stormwater, known as swales.

Biofiltration plants such as yarrow, top, and bioswales are part of the plan to remove pollutants from stormwater and reduce runoff.

The newly implemented treatment plan is “an aim to maintain clean water in the bay through stormwater infiltration basins that will cleanse water from the pavement prior to the water entering the storm drains and ultimately the bay,” Potis said.  In large planting spaces, a special biofiltration soil allows debris and chemicals to remain in the soil for the plants to remove naturally and a more even ratio of landscape to hardscape prevents the streets from flooding with storm drain water.

Not only does the station conserve resources by minimizing water needs and maintenance for landscape, but BART also has illuminated the entire bus intermodal zone with LEDs (light-emitting diodes).  LEDs are different from traditional incandescent or CFL lights because  they are a form of directional lighting that does not produce as much heat that can cause burnouts.  (For more information on energy-efficient lighting visit www.energystar.gov.)   LEDs can last much longer than traditional light bulbs that can burn out due to overheating, which makes the station’s new lighting much more reliable for BART users and sustainable over time.

On main streets near the BART station, the city of Richmond conducted surveys on most-wanted improvements from residents, and concluded that lighting the streets and sidewalks at night was a major priority to keep pedestrians safe. 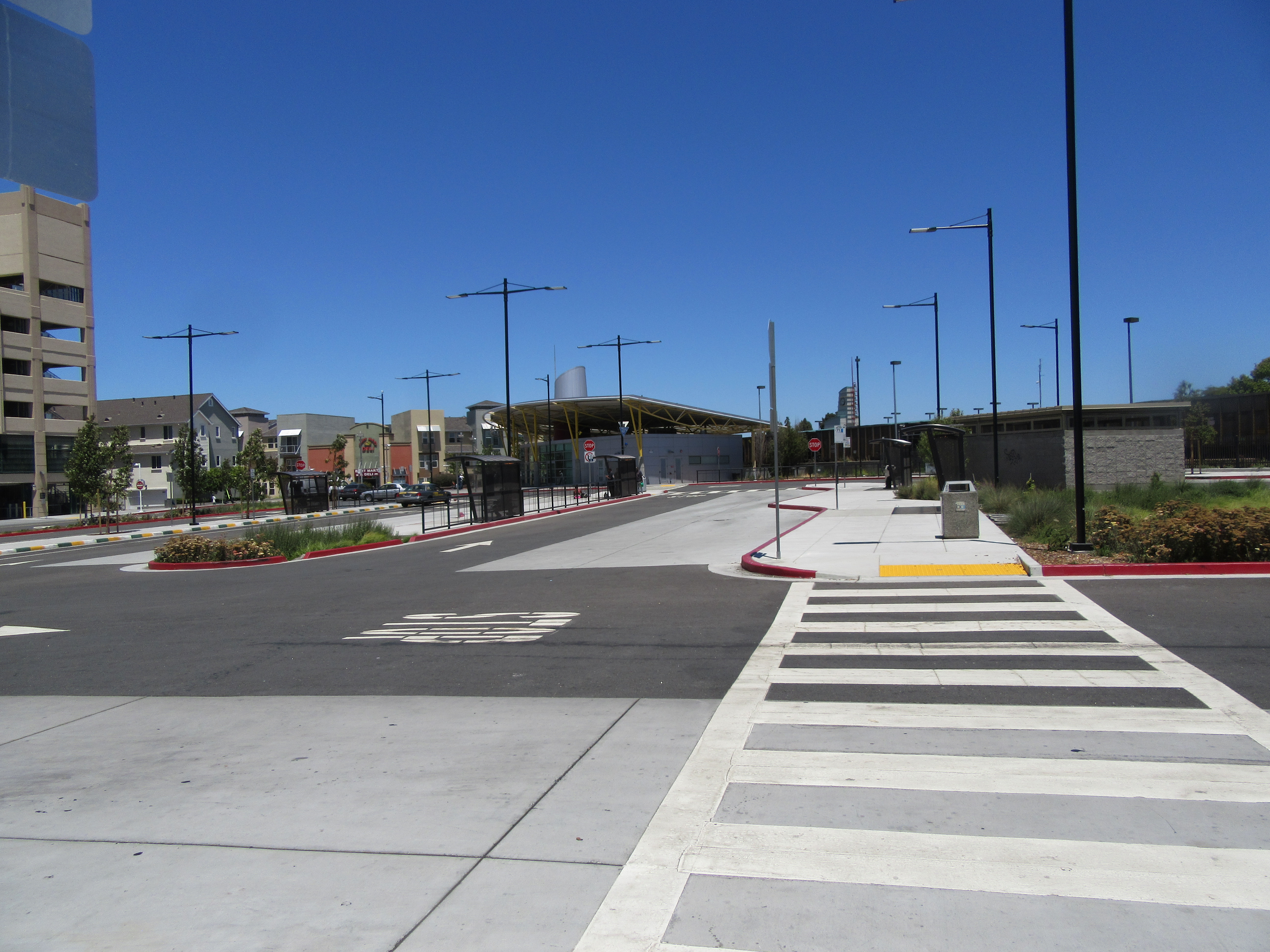 Adam Lenz, the environmental manager for the City of Richmond, is in charge of overseeing waste management and energy initiatives concerning the city and plays an instrumental role in developing the City’s climate action plan and implementation.  He said in an interview that “LED lighting is a really important component and an example of how BART improvements will make the station more energy efficient and provide community co-benefits such as improved walkability in downtown Richmond”. He added that since the city secured financing from the California Energy Commission to improve street lighting with LED fixtures city-wide, it was good to see BART improve the transit center to the same energy efficiency and lighting quality standard.

Whether you are taking the Amtrak from Sacramento for a business trip, or taking AC Transit to visit family in Richmond, these changes affect the convenience factor of your commute.  Besides BART, the Richmond station also has an Amtrak platform and a bus terminal to connect many forms of transit along with bike racks and lockers.

Intermodal connections like these that make sustainable transportation more convenient are highlighted in BART’s Transit-Oriented Development Policy, in which one of the goals listed is to “encourage non-auto transportation choices both on and off BART property, through enhanced walkability and bikeability, and seamless transit connectivity.”

In BART’s newly adopted Access Policy one of the listed goals for BART is to “Prioritize the most sustainable access modes, with a focus on the lowest greenhouse gas and pollutant emissions per trip” which the Richmond station has already been exemplary in achieving.  The new bus stop design in Richmond allows for pedestrians to cross from the train station to the bus stops safely and comfortably with newly painted crosswalks and paved paths for pedestrians.  Each stop also includes a seating area and shade covering for riders.  In an interview with station agent Jaime Steffen, who has worked for BART for 8 years, he said that many passengers utilize the Amtrak accessibility from BART and he likes the more conveniently designed bus zone where he notices more people are taking the bus. 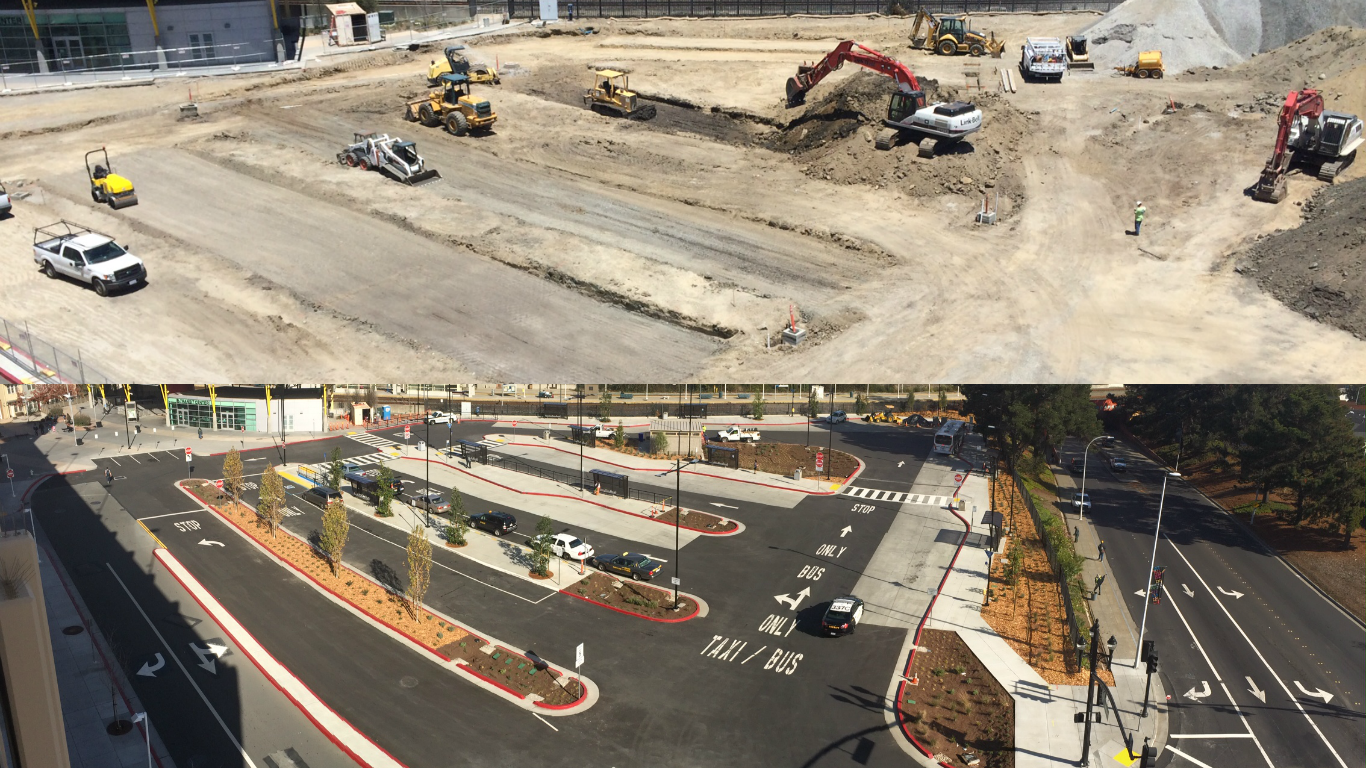 The transition area from buses to the station was modified to create safer paths for pedestrians and bikers.  (Photos courtesy of Scott Smith)

“The layout is very nice and well-marked,” he said. “It’s a lot safer at night.”  By creating safer and more convenient ways for people to take different modes of transit BART is encouraging taking cars off the road to decrease the community’s carbon footprint. Lakisha Lewis, 26,  was waiting for her shuttle bus when she described the modifications as “more people-friendly” and said that having all her transit stops in one good location was easier on her commute from Pinole. 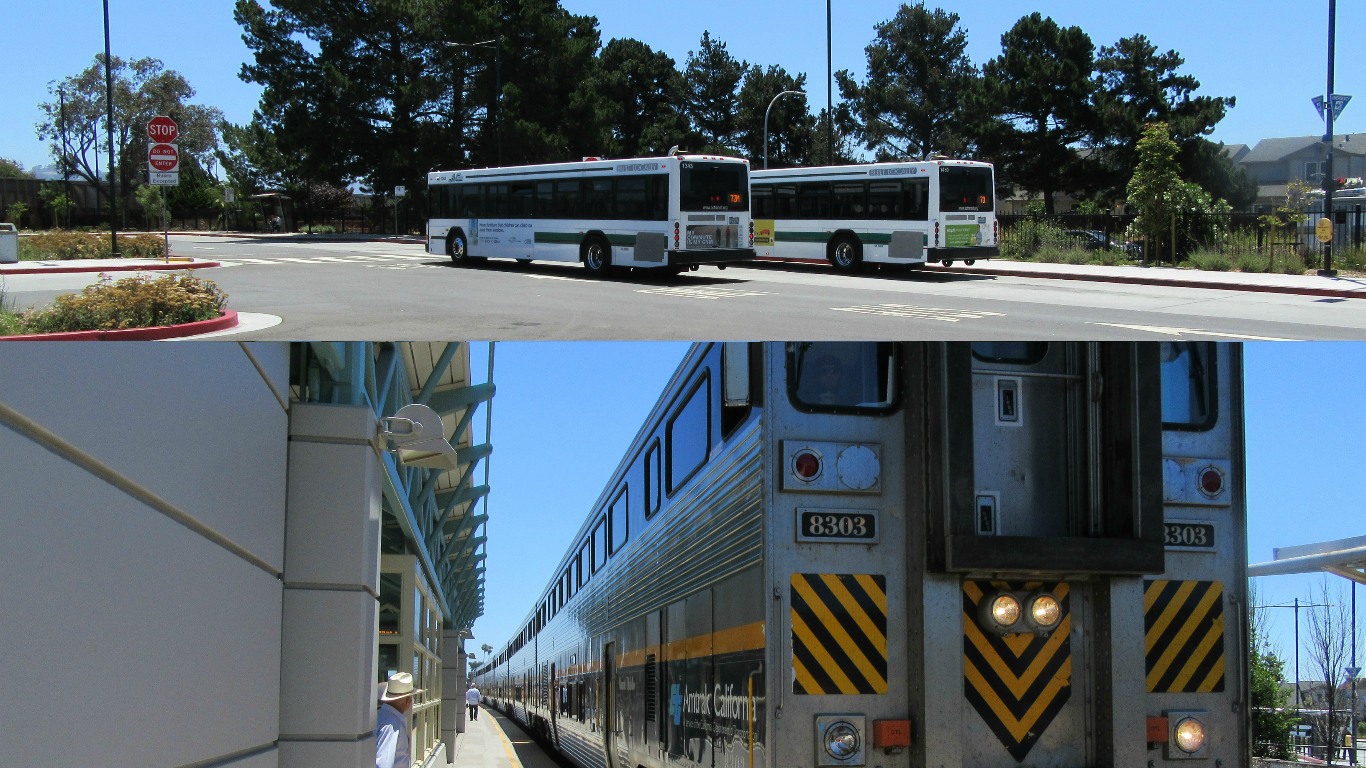 Charlene Smith, senior development officer at the East Bay Center of Performing Arts, has been taking BART from San Francisco to Richmond everyday for work, along with most of the high school students out of the center’s 130 teenage participants during the summer, for the last 26 years.

The arts center’s proximity to BART makes it convenient for participants, staff, and audience members to continue to take transit and walk to the performances.

“I noticed immediately the city’s improvements along with BART’s that made it more pedestrian friendly and nicer to walk through at night” Smith commented.

She said that without BART, she would not be able to work at the East Bay Center for Performing Arts and her walk to work has become much safer with clear paths to separate cars from buses, bikes, and pedestrians.  The goal of the redesign is to make the lives of people like Smith much easier and safer when taking transit, in whatever form.

Increased affordable housing near the Richmond station is another aim to make the community at large more sustainable and convenient for those living in Richmond, as well as those looking to move there.

Paul Voix, principal property development officer at BART’s Real Estate Department, said his ideal sustainable community is one that is “vibrant, transit oriented, and with integrated mixed use zoning that meshes the station with the community and creates a sense of place,”  he said in an interview.  Around 655 affordable housing units are proposed to be built on the East side of the station in order to encourage more people to be able to walk to the transit hub and reach their destinations without getting into a car. 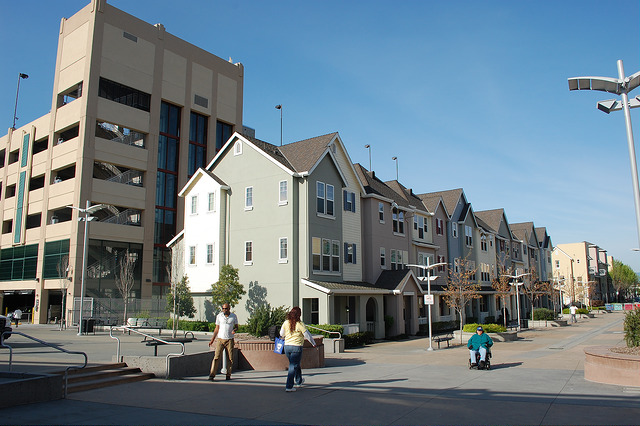 “Housing near places of employment or at least transit to get to places for employment is a paramount goal in the real estate and development department” said Voix.  Richmond is an excellent example of the newly adopted Transit-Oriented Development (TOD) Policy focusing on affordable housing to open the doors for many communities near transit.  Improving the area at large requires BART to collaborate with the City of Richmond to determine what the city envisions for the area as far as zoning and building height requirements.

Now, there will opportunity for business and residential development near Richmond Station.  Since parking has been transformed into a vertical structure, there is more land available for housing and commercial buildings.

“The transit hub is the front door to the city and an enhanced, more attractive front door is a benefit to everyone in the community.  Rather than a station with surface parking, this idea integrates transit with the surrounding community,”  Voix added.

The overall impression is that an impressive amount of thought and planning was put into the Richmond Station project’s sustainability.

The next time you visit Richmond Station, take a moment from looking at your mobile phone to stop and smell the mossy, sweet aroma of the white lantana flowers. If you have to wait for the bus in the newly landscaped terminal area, cool off in the shade of a Western redbud tree and let it shower you with pink blossoms. Marvel at the transformation still underway of a station that may previously have been known -- fairly or unfairly -- as an unattractive, less-than-safe one. Today, it is a jewel in the BART system whose features are an example of a sustainable transit-oriented community guiding future BART projects around the Bay Area.

Story author and photographer Raquel Crites can be reached at rcrites@bart.gov