Behind the scenes on Veterans Day: How BART & partners help homeless vets get off streets

Behind the scenes on Veterans Day: How BART & partners help homeless vets get off streets

If you don't personally know a veteran to thank on Veterans Day this Friday, here's a suggestion: be grateful for the men and women who work tirelessly to assist homeless veterans who seek shelter in BART stations. 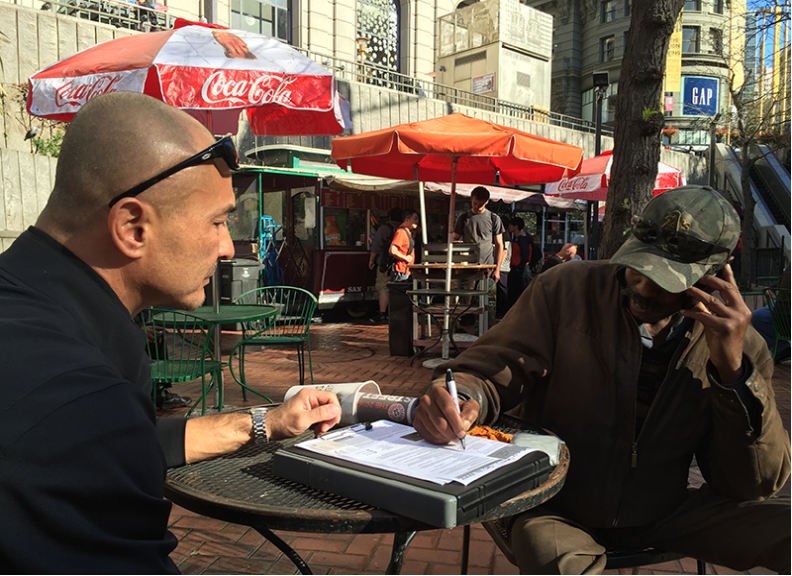 Outreach workers from the nonprofit organization Swords to Plowshares, mostly veterans themselves, meet each Tuesday in a communications huddle with BART staff at Powell Street Station, going over detailed lists of veterans who are homeless and often seen in the stations. "How's our Navy guy, the musician?" asks Armando Sandoval, BART's crisis intervention and homeless outreach coordinator.

The outlook is good: Kevin Bynum, 48, has been placed in supportive housing, and is thriving.

Bynum, who later agreed to an interview, served in the 1980s and 1990s as a Navy corpsman. Along the way after that, “I lost my job; I lost my apartment.” He ended up homeless, spending days in BART stations playing guitar for tips.  One day he ran into a worker from Swords to Plowshares, which he had never even heard of. They gave him a $10 Subway sandwich gift card to get a meal. “Then once I completed all the paperwork, two days later there was a room ready for me to move into,” he said.

Many veterans without housing are essentially disenfranchised; with Election Day top of mind, Bynum said he was especially glad to have an address and was quick to register to vote.  “I’ve always voted,” he said. “I joined the military to do my part for this country, and I still try to do my part, by voting. That’s something I wish everybody would take more seriously.”

Benjamin Bencomo of Swords to Plowshares said sometimes the little things, like the sandwich card or a conversation over a cup of coffee, can help a homeless veteran decide to make a change. "We try to prepare people identified as veterans so they can access the services that are available to them," Bencomo said. “We plant seeds of hope.”

Part of that involves coordinating with Sandoval and BART Police on what's up with "regulars" in the system, as well as those who show up new and unaware of what may be available to them as men and women who have served their country.

The previous Friday, a BART Police Officer had run into a homeless veteran and texted a photo and message to Dennis Johnson, a Swords outreach worker. “Here’s a newbie,” it said, asking if Johnson could stop by and speak with the man. (Johnson is pictured above helping a different man fill out paperwork to determine eligibility for services).

Another part of the coordinated response is walkarounds through all the downtown San Francisco stations.

"Hey brother," Johnson said to one man.  "We're supposed to have rain coming soon; would you like a poncho?", he asked.  Johnson had a handful of the rain 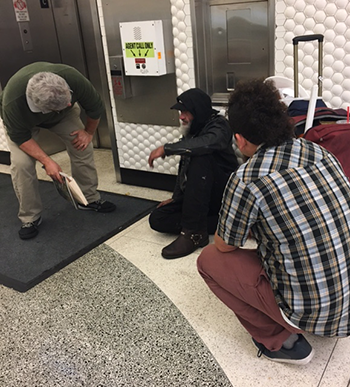 coverings to hand out. The man took one and thanked him.

In another case, a man was sitting on the floor of a station, propped against the back wall, as a cleaning worker tried to mop around him. "Sir, you're going to have to get up and move on," Sandoval told the man, who fumbled trying to put on his shoes and grumbled under his breath. "We don't want to have to call the officers to come and cite you; let’s make sure you’re OK and can move along.”

Lying down or being asleep in BART Stations endangers safety should there be an emergency that requires quick evacuation, and BART PD have a process for dealing with those cases, going from verbal warning to written citation to, ultimately, arrest.  Sandoval and the Swords workers try to keep people out of stations and in services, where they can get the help they need, but it can be a long and difficult process, and not everyone is ready. (Above, Bencomo and Johnson speak with a veteran in a station about possible services available to him.)

This work is balanced with the inviolable acknowledgement that BART riders all deserve an environment that is safe and clean.

“My focus is to try to keep the stations clean under difficult circumstances,” said Paula Fraser, Assistant Chief Transportation Officer for BART and manager over the lines that include downtown San Francisco stations. “I’m also proud to know we are paying attention to human dignity. Veterans should never be invisible." (Below right, a cleaning worker mops a station floor; an ongoing process toward the priorities of safety and cleanliness.) 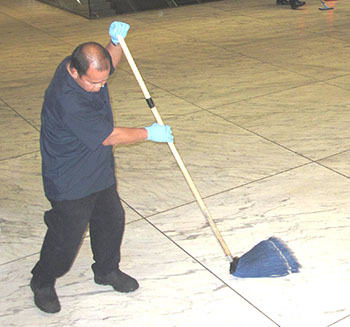 Sandoval approached a woman veteran, a known "regular." "What do you need from us, Marla?" he asks. "How can we help you?"

Out of some 30 known veterans among the chronically homeless over the past 18 months, Sandoval says, the Swords to Plowshares and BART efforts have resulted in about half being placed into some kind of services that give them a place to stay outside the BART system. It could be shelter housing; permanent housing; or a reconciliation with family who take the person in.

"Swords brings much-needed services to the homeless veteran population," said Sgt. Brando Cruz, who works out of the downtown San Francisco zone. "Many of these veterans have PTSD, mental health, or substance abuse issues. They can relate to Swords to Plowshares workers on a peer-to-peer level as fellow veterans," he said. "And Swords is here on a regular, consistent basis." (Below and at right, a team of outreach workers makes contact with a man in a station to see if he is ready to be connected with housing and other services.) 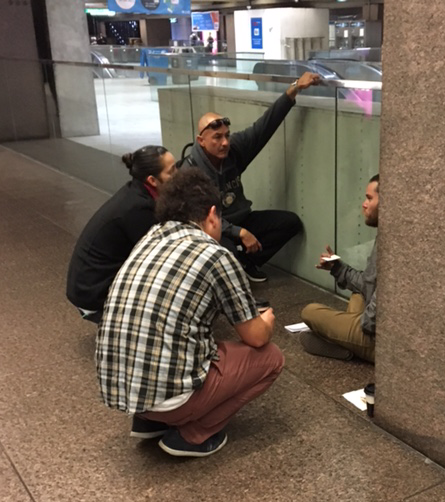 On Tuesday, Johnson sat down with a man in Hallidie Plaza, outside Powell Street Station, and asked about his situation.

"Let's get you an appointment for tomorrow to get you in to see a caseworker," Johnson told him, dialing the main office on his mobile phone. "How about oh-nine-hundred hours?"

"Can we make it 10?" the man asked, before filling out paperwork. As Johnson explained, the range of services is different for those with honorable discharges, less than honorable discharges, or even those who did not serve a complete tour of duty. "If they served one day, I can help them with some things," he said.

Sandoval encouraged BART riders to remember that veterans may let their pride stand in the way of receiving help, and may take many contacts before engaging.

"It takes a lot just to survive on the streets," he said. "During the holidays, it would be nice if we could all have a deeper threshold of patience and tolerance for those who area less fortunate, especially those who served," he said. "We are all potentially fragile."

For more information on Sandoval's outreach on behalf of BART, read here: http://www.bart.gov/news/articles/2014/news20140506

For more information about Swords to Plowshares and to find out how you can volunteer, visit their website at https://www.swords-to-plowshares.org/