New advances in collaboration with other law enforcement agencies and even other fields -- like social services, schools and health providers -- are helping BART Police create a safer system for riders.

One impetus for that collaboration comes from the heart of a training program called the Safe Communities Institute (SCI), which several BART PD personnel have attended.

Lt. Terence McCarty, who oversees criminal investigations for BART PD, is one of those who has attended the program.

You learn not to silo yourself -- Lt. Terence McCarty

"You learn not to silo yourself, and to reach out to other agencies," McCarty said, a practice that may sound common-sense but that historically has not always been the case in law enforcement. If you're a fan of Law and Order-type TV procedurals, you often hear officers from different precincts spar about who gets "the collar."

SCI teaches just the opposite. "In the program, you see how effective it is to collaborate with your other public partners," McCarty said. Collaboration is now the norm for BART PD, who regularly engage in huddles with multijurisdictional and even multidisciplinary teams, such as for crisis intervention training or suicide prevention efforts. 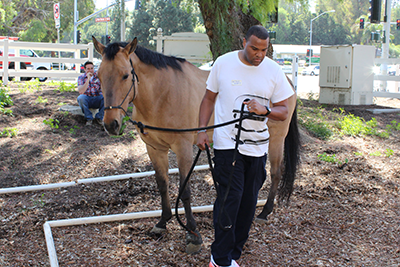 Sgt. Ja’Son Scott in the Leadership Through Horsemanship segment of SCI

“This program generates a lot of fresh ideas by letting you interact with people from different disciplines,” said Sgt. Brando Cruz, another graduate of SCI. “I’m a continuous learner and I appreciated the opportunity to do something contemporary and cutting-edge like this.”

In the Safe Communities Institute, housed at the University of Southern California's Price School of Public Policy, community partners come together to learn leadership and strategies for more effective policing.

The big thing is understanding that public safety is not only a police problem --  BART PD Chief Kenton Rainey.

"The big thing is understanding that public safety is not only a police problem," said BART PD Chief Kenton Rainey.

Rainey joined BART in 2010 and is retiring at the end of 2016; he implemented a slate of reforms recommended by the National Association of Black Law Enforcement Executives after the New Year's Day 2009 fatal shooting of Oscar Grant. "Everybody has a part to play." Rainey also sits on the advisory board for SCI.

Public and mental health professionals, prison officials, firefighters, social workers and those from other walks of life participate with police officers in SCI training.

"A lot of times in your everyday job you don't have the ability to meet up with those particular individuals, so you learn a lot" at SCI, said Sgt. Rick Martinez, another graduate. "It's easy to go out there in the field and talk to another police officer ... but to get somebody that's outside of the profession and to speak about the same issues but to come at it from a different way, it only enhances your ability to do the job."

...To come at it from a different way, it only enhances your ability to do the job. -- Sgt. Rick Martinez

SCI began its existence back in 1946 as DCI, the Delinquency Control Institute – think “juvies” in white t-shirts and rolled-up jeans smoking cigarettes behind the high school. In that era, it had an emphasis on building a more effective juvenile justice system. It became one of the nation's most respected training programs in that regard. However, as the nature of threats to public safety was changing, the police training needed to combat those threats was changing, as well. DCI took a hiatus from 2011-2015 to consider its path forward and reopened as the Safe Communities Institute.

"The DCI nomenclature is no longer applicable," said Frank Zerunyan, J.D., who teaches in governance and negotiations doctoral programs at USC and is one of the SCI instructors. "Today it's much more about communities and the safety of those communities; making sure we educate our law enforcement officials in a way that is applicable to the world today."

"We're asking a lot of our cops, and their training is limited," he said. "Today's cop is a social worker, a psychologist. They need to be able to tap resources in the community that can collaborate with law enforcement." He said new technologies are always arising that are used by criminals, so police must stay one step ahead -- and must be aware of emerging threats such as homegrown violent extremism. 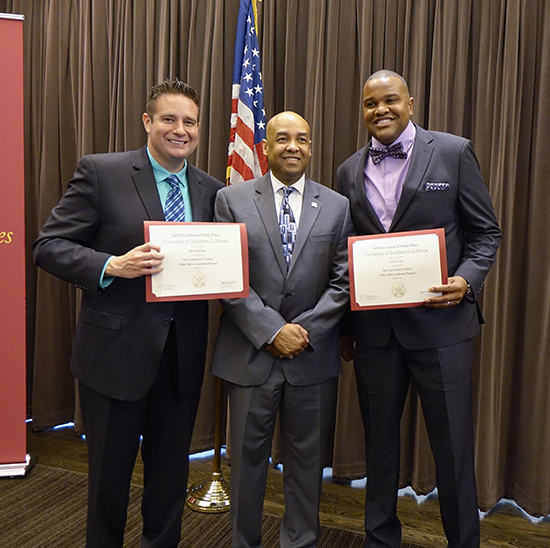 Zerunyan says he sometimes encounters pushback from SCI participants at first, particularly those who are set in their ways and resistant to change. He credited BART's Police Department with having the foresight to support its personnel's attendance, and said BART’s participants have been ahead of the curve.

"We appreciate the fact that BART sees the value of a program like this and you send your people here to get a more well-rounded education," he said. "BART is doing things the right way."

Dr. Frank Quiambao, director of the institute, said it's imperative that agencies work together in the modern public safety environment, and that they receive training in how to do so.

"We don't just have police in the focus as we did in the past," said Quiambao, who served 10 years in state and federal homeland security functions. "There is the educational system, the probation system, the prisons; they all have their unique things they are working on, but if they can leverage each other and communicate, it can help."

The program is not in an ivory tower. It includes experiential exercises that vary each session, but could be walking L.A.’s Skid Row with a social worker to learn about community resources for getting homeless people into services, or visiting a firehouse with firefighters. It also includes exercises that are not conventional in most police training, but are aimed at building leaders, such as a segment on “Leadership through Horsemanship.”

“Going through the horsemanship program showed me about having confidence as a leader, and that each individual you supervise may respond differently to something,” Sgt. Martinez said. “It sounds simplistic but with the horse, you have to be clear and concise in your movements and if you have clear expectations, it sets the stage for better communications. It’s a little outside the box and a police officer more often than not doesn’t get the chance to experience that kind of thing, but you really can take it apply it to your job.”

Chuck Wexler, executive director of the Police Executive Research Forum (PERF), a nonprofit research and policy organization, said in an interview that participation in SCI shows BART is serious about having a modern and maximally effective police department.

BART has distinguished itself as a leader in looking for innovative ways to educate its workforce. Chuck Wexler, executive director of the Police Executive Research Forum

"BART has distinguished itself as a leader in looking for innovative ways to educate its workforce," he said. "This is very forward thinking. We live in a society that is increasingly becoming more polarized, more divisive. Officers need this kind of training to help defuse what can start as something minor and turn into something major."

BART Police's training goes beyond the minimum of the Commission on California Peace Officers Standards and Training (POST) requirements. All BART officers undergo crisis intervention training, community-oriented policing training, fair and impartial policing training; also, all patrol officers and sergeants use body-worn cameras, one of the first police departments in California to do so.

BART PD also has been a pilot site for PERF's Integrated Communication Assessment Tactics training, which takes crisis intervention skills to a new level by delving into specific tactics such as de-escalation.  "We focus on decision-making,” Wexler said, and not only the linear concept of the use-of-force continuum. When decisions are less black-and-white and more nuanced, training in leadership and judgment becomes even more crucial. "Stepping away is anathema to some police cultures. But in some situations, you can use different tactics to defuse potentially violent situations and keep citizens and police officers safer."

Among the other reforms supported by Rainey, in keeping with the SCI philosophy and with the support of the BART Board of Directors, are a Citizen Review Board with members from different walks of life and an Independent Police Auditor for another check and balance.

SCI is just another piece in making our training progressive and current -  Sgt. Carolyn Perea, training sergeant for BART Police

"SCI is just another piece in making our training progressive and current," said Sgt. Carolyn Perea, training sergeant for BART Police, who keeps track that the force has its mandatory training up-to-date as well as seeking out new and challenging training programs. A recent report summarized training efforts and other BPD initiatives.

BART PD will continue to be involved in the SCI and intends to send other personnel to participate in the future, said Deputy Chief Jeff Jennings, who will be rotating through as acting chief until BART completes its search for a new chief. "It's very good training for preparing our next generation of leaders in the BART Police Department," he said.

“Nobody is smarter than all of us together,” Ralph Brown, PIO for POST

“Nobody is smarter than all of us together,” he said "Collaboration goes a long way to help law enforcement achieve its goals.”

For more information on SCI you can visit their website at:  http://priceschool.usc.edu/programs/sci/