Podcast: Meet the woman who watches over the third rail

Podcast: Meet the woman who watches over the third rail

In the latest edition of our podcast series "Hidden Tracks: Stories from BART" we learn more about one of the people who plays a critical role in keeping the system running.  Stephanie Bookout is an electrical foreworker who is part of the team that watches over the third rail, which provides power to all of our trains.  Bookout has been with BART for nearly 10 years and has advanced to a supervisor’s position in what has been a male-dominated profession.  Bookout talks about what it’s like to help manage the lifeline of the BART system and how challenging that job can be when we go through wet weather.

You can also listen to the entire series.  Transcript below: 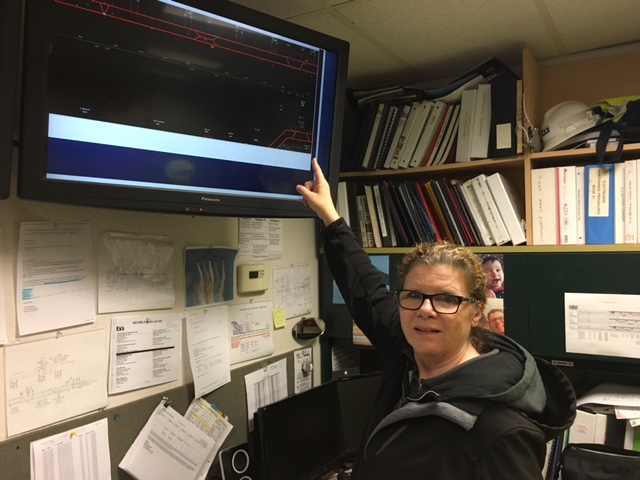 HOST: “Welcome to our latest edition of “Hidden Tracks: Stories from BART.”  I’m Chris Filippi and this time I have the pleasure of speaking with Stephanie Bookout who is an electrical foreworker for BART.  Stephanie plays a critical role in maintaining the system.  She’s also risen through the ranks in a typically male-dominated profession to become a critical part of the team that keeps the BART system running.  Stephanie, it’s a pleasure to talk with you.”

BOOKOUT: “Hi Chris, it’s nice to talk with you as well.”

HOST: “So you’re an electrical foreworker.  A lot of folks will hear that and they won’t necessarily know what this is.  Tell me what your job is here at BART.”

BOOKOUT: “I’m a supervisor.  I supervise crews to go out and respond to calls that are related to powering the third rail.  It can be anywhere from handling something in the substations to actually going out wayside where the third rail is and responding to trouble calls out there.”

HOST: “Yes and that’s pretty critical too.  The third rail is what keeps this big electrical train set that is BART running and obviously when there is rain there can be some real challenges with that.”

BOOKOUT: “Absolutely.  Our goal is to keep the trains running and just the other day we had a tree down in the trackway.  Structures had to deal with getting the tree out and our crews had to deal with assessing the third rail and making sure it was usable and they also had to make repairs to it that night.”

HOST: “So basically when there’s a problem with the third rail, our electrical power system, it’s your job to notice it and to get folks on it right way.”

BOOKOUT: “Absolutely yes, we have a central operations control center and they know absolutely when we lose power to the third rail and it’s my job to dispatch crews out there immediately to figure out what the problem is, assess it and fix it.”

HOST: “And you’re watching a lot of rail out there too.  I think a lot of people don’t recognize, a lot of BART riders don’t realize that BART is really on top of this and that quick response is really critical.”

BOOKOUT: “Absolutely yes it’s a big system and we have crews stationed in satellite areas all over the system.  That helps getting to the problems quicker and responding and getting the system back up and running.”

BOOKOUT: “You know the electricity is daring and exciting.  Of course you have to be very respectful because we work with very high voltages but I think I like that part of my job the most.  It’s not boring at all.”

HOST: “Let’s talk about that.  An element of danger with this profession I would assume.  We always hear about don’t touch the electrical third rail I mean we’re talking about serious voltage there.”

BOOKOUT: “Yes that’s no joke.  Pretty much all of the voltages that our department works with are extremely dangerous.  Not only do you have to have a very high respect for what you’re doing and for the voltage itself but you have to know what you’re doing.  And there’s a lot of very skilled very talented people that we work with so everybody works together and stays safe and thinks about what they do before they do.”

HOST: “What would you say is the most challenging aspect of your job?”

BOOKOUT: “I think the most challenging part of my job is being patient at learning what I need to learn.  There’s so much information out there and so much to learn.  That’s the one thing that I never get bored about my job because I’m not going to ever stop learning here.  I mean you don’t stop learning if you have that kind of mindset anyway no matter where you are.  But with all the equipment that we work on it’s so interesting and there are so many things to learn from it sometimes I’m just like gosh I wish I knew more about this piece of equipment.  That’s probably the most frustrating thing for me or the most challenging part of the job.”

HOST: “Of course this is an aging system.  A lot of the infrastructure is very old, some of it goes back to the opening in the early seventies and of course BART is taking steps now especially through Measure RR to replace a lot of that old infrastructure.  But I would think some of that might be a challenge for you.  I would think a lot of it is aging equipment, and I don’t know I’m not an electrician, but it would seem like it might be harder to deal with.  Is that the case?”

BOOKOUT: “You know what that’s so true.  We are dealing with a lot of equipment that has timed out.  It’s really a struggle to keep fixing it and fixing it.  We need to get in and replace these things and that’s also a challenge because we’re trying to bring in this new equipment as quickly as we can, make all these changes as quickly as we can because we want this to remain a reliable form of transportation, obviously.”

BOOKOUT: “I would want them to know that we really do care about transportation and getting people safely to and from wherever they need to go on time and our people work very hard.  We’re proud of what we do so we invest as much as we can, heart and soul, into that idea so eventually with all these new improvements it’s going to be wonderful.  I don’t think it’s bad now but like I said we are facing some challenges with the aging part of the system but our goal is to keep the public happy.”

HOST: “Let’s talk a little bit about your background because you come here from a pretty unique perspective.  You actually worked at a steel mill before you came to BART, is that right?”

HOST: “Also interesting from the perspective that you’re one of the few women to work as an electrical foreworker I mean this is kind of, has been historically a male-dominated field.  How do you feel about that?  You’ve had a lot of success it sounds like.”

BOOKOUT: “I get a lot of support.  I came in and there was a woman that was an electrical foreworker for over ten years I think, her name was Joyce Oliver, and I consider her definitely one of the pioneers.  But it’s a wonderful opportunity for women and I think now more women are starting to realize that they can be successful in these non-traditional trades and make good money and have interesting careers.”

HOST: “I know BART has always really placed an emphasis on having a diverse workforce that reflects the Bay Area.  Have you seen that in your experience at BART?”

BOOKOUT: “BART is definitely the most diverse place I’ve ever worked and it’s wonderful.  I mean there’s so many different cultures and backgrounds and levels of experience and intelligence there’s just so much to gain from here.”

HOST: “Speaking with BART electrical foreworker Stephanie Bookout.  BART offers a lot of opportunities.  If you could give advice to maybe a young woman who is looking at becoming an electrician is BART the kind of place she could look at for a career?”

BOOKOUT: “Definitely.  BART is wonderful.  Again, it’s very diverse there’s so much to learn, they’re very supportive, encouraging, you have room for advancement.  As long as you have that drive in yourself and confidence you can definitely go somewhere at BART.”

HOST: “You must take a lot of satisfaction from your work.  Just the idea that on a typical weekday we have more than 430,000 passengers that are relying on the system and to keep those trains running that’s a very powerful responsibility.”

HOST: “Stephanie, thank you so much for joining us.”

HOST: “And thank you for listening to “Hidden Tracks: Stories from BART.”  As always you can catch our podcast on SoundCloud, iTunes, Google Play, Stitcher and at our website BART.gov.”