BART is using a new strategy to reduce delays through the Transbay Tube.   During peak commute hours BART is now deploying mainline technicians at both ends of the Tube at our West Oakland and Embarcadero Stations.  These highly-trained technical experts spend the commute riding dozens of trains through the Tube.  That allows them to respond much more quickly to mechanical issues that can stop a train in a critical choke point for the entire system.

In the latest edition of our podcast series “Hidden Tracks: Stories from BART” we learn more about this new strategy and how it’s already making a difference.  We also hear from one of the mainline techs who is using his 28 years of experience with BART to keep the trains moving.  Transcript below: 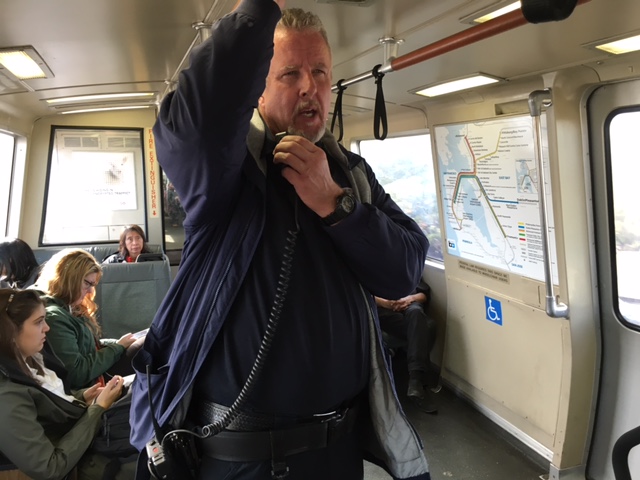 “Central train 509, three decimal six on the MT train.  Have a brake on in propulsion, I think there in the cab.  Passenger called me saying three-four-three smelled like smoke.”

That’s the sort of problem that can create a major headache for BART riders….especially if it happens on a train in the Transbay Tube.

During peak commute hours, nearly 70,000 people ride through the Tube in each direction.

But there are only two rail lines.  That means there’s nowhere to divert a train with a problem.

That’s why when there’s an issue in the Tube, the consequences can be felt quickly throughout the rest of the system.

But BART is trying a new strategy to keep delays that could clog the Tube to a minimum.

The idea is to have our specially-trained experts, mainline technicians, strategically placed on both ends of the Tube….ready to respond at a moment’s notice.

“We try to have a mainline tech one at West Oakland, one at Embarcadero during the commute the whole time and then be able to switch off and have one mainline tech on every other train in both directions going through the Transbay Tube.”

Those mainline techs are on the watch during peak commute hours.

Smith says the techs will board 20 to 30 trains during a typical commute.

When you follow along with one of the mainline techs you quickly see how they can have a huge impact….even if it’s something relatively minor like trying to restart the air conditioning in a hot car.

“You get a lot of people in these cars, it’s just blowing ambient air it’s gonna get hot in here.  That’s not terribly comfortable.  We try to make it better, sometimes you can sometimes you can’t.”

Brian Kirkham has been with BART for 28 years.  He knows these cars inside and out.

“Oh there isn’t too many things I haven’t done.  Everything from lightbulbs to major incidents, done it all.  And still learning, there’s always something that’s new and interesting to deal with.”

Kirkham and his fellow mainline techs keep a watchful eye from Embarcadero and West Oakland.

They board trains through the Tube, ready to respond at a moment’s notice.

“You never know when something big is going to happen.  You can run into a brake on in propulsion that stops a train, people start panicking.  We want to be there to take care of that before it escalates into something worse.”

A brake on in propulsion is one of the most common problems encountered by the mainline techs.

It occurs when the brakes on one of the cars that make up a train engage when they’re not supposed to.  The train then comes to a stop until the situation is resolved.

Having a tech available to respond quickly to a brake on in propulsion is vital to avoid major delays.

“It’s better to catch a train before it goes into the Transbay Tube and we’ve had several occasions where guys have been at Embarcadero and been at the right spot at the right time and just step on a train to take care of it before it does escalate into something worse.”

The Tube isn’t the only spot where mainline techs are on the job.  Each of BART’s lines is continually staffed by these highly-trained experts.

But if the techs can keep the Transbay Tube open for business, that benefits BART riders everywhere.