The BART Police Department has announced the arrest of a suspect wanted in connection with two recent violent attacks on the BART system.  42-year-old Mario Christopher Washington of Berkeley was arrested Monday morning in Oakland after he was spotted by an Oakland Fire Department investigator.

At approximately 8:39 a.m., the BART Police Department received two transfer calls from both the Oakland Police Department and the Oakland Fire Department telling us the fire investigator spotted the suspect.  Several officers responded to the corner of 9th Street and Broadway where they were flagged down by the fire investigator who made the initial call.  With the help of that initial tip, BART officers located the suspect and placed him under arrest.  Washington was arrested just more than two hours after the public release of suspect images from two recent attacks that were taken by surveillance cameras on board BART trains.  Washington has been booked on suspicion of assault with a deadly weapon and battery. 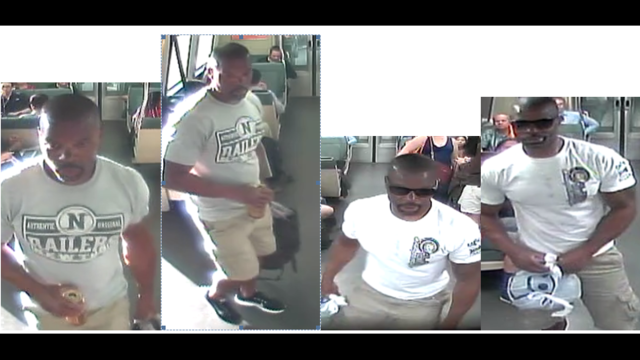 Washington is under arrest for the following crimes:

On August 3, 2017, at about 1931 hours, a male victim was seated on a train when a male suspect hit him in the head with an unknown metal object. The suspect also punched and kicked the victim before fleeing the train and running out of the station. The victim and witnesses say the attack was unprovoked. The victim was treated for a laceration to his head and transported to the hospital via ambulance with non-life threatening injuries.

On August 5, 2017, at approximately 1930 hours, the same suspect was on a San Francisco-bound train approaching Embarcadero Station.  The suspect approached a man on the train and struck the man two times in the face with a closed fist.  The victim does not know the suspect. The victim received medical treatment at the scene for non-life threatening injuries.

All 669 of BART's existing fleet have four working surveillance cameras. The 775 Fleet of the Future train cars will have six cameras each.

The arrest serves as a reminder that "See Something, Say Something" is more than a slogan. Members of the public are encouraged to report suspicious behavior or unattended packages.

What should you do when you observe something out of the ordinary? Report it to a BART employee.

If you are in a station:

If you are on a train:

When you make your report: