Behind the scenes: BART's partnership in LEAD program addressing homelessness

Behind the scenes: BART's partnership in LEAD program addressing homelessness

Jessica’s 23 years on earth had brought her to this place: Civic Center BART Station, tired and hungry, at a decision point. She had no drugs in her possession, but was carrying clean needles like a talisman against the heroin that had torn apart her young life.

Her cheery Facebook account belied her real situation. On the pages were photographs of a young woman with a silly grin and big, brown doe eyes. She wrote of mundane things, like eating Cocoa Krispies and watching SpongeBob SquarePants, alongside milestones like entering college and starting a relationship.

But BART Police Officers Dave Touye and Eric Hofstein knew different. As beat cops in Zone 4, which includes the downtown San Francisco stations with the largest homeless populations, they had seen Jessica (a pseudonym to protect her privacy) nodding off into a heroin haze, becoming thinner, sicker, more vulnerable in the space of a few months. 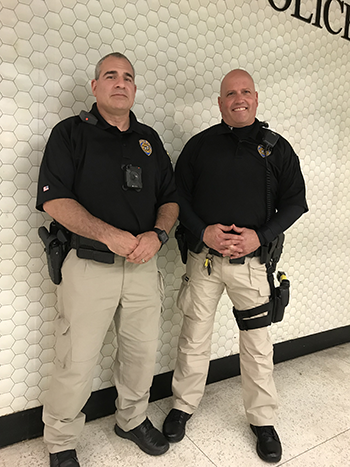 For whatever reason, on that November 2017 day, in that moment, Touye was offering something that seemed to make a difference. Jessica became the first person sheltering in BART to be referred into a new pilot program called LEAD, for Law Enforcement Assisted Diversion.

Modeled after a program in place six years in Seattle with evidence of positive results, LEAD focuses on harm reduction rather than judgment or requiring total abstinence. It includes homeless people, law enforcement, public health care providers, social workers and others from the community -- all partners in the process, rather than on one “side” or another.

Jessica agreed that day to go into the LEAD program, and she has 30 days to meet with the caseworker who will show her the way.  "She told me she was ready, she was willing," to go into the program, said Touye, who along with Hofstein are among the "boots on the ground" dealing with the homeless population, along with their regular patrols and crime-fighting duties, in the transit system crisscrossing the increasingly unaffordable Bay Area. (They’re pictured above – Hofstein at left and Touye at right.)

LEAD is paid for through a $6 million grant from the Board of State and Community Corrections, which is being administered by the San Francisco Department of Public Health. The program has the potential to be a real "win-win," according to Janet Ector, LEAD program coordinator for GLIDE, the San Francisco nonprofit whose mission is to create a radically inclusive community that breaks cycles of poverty and marginalization. LEAD has three goals, which are closely monitored and measured:

"LEAD signals a dramatic shift in trying something new," said Kyriell Noon, GLIDE’s senior director of programs. "There is the potential for us to make changes to get it right, to implement our best thinking." Ector and Noon, who sit side-by-side with police officers, prosecutors, defense attorneys, and other nonprofit agencies at regular LEAD working group meetings, said the chance to hear each other’s perspectives has led to breakthroughs in collaboration. (Image of one collaboration meeting at the Powell Street BART Police substation is pictured below.) 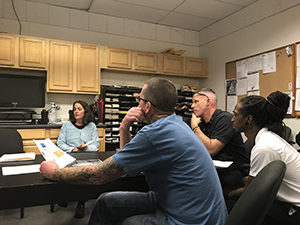 "We all agree that arresting everyone isn't the solution, isn't even possible," he said. "We are attempting to embody a harm reduction philosophy. We’re bringing together what seem like diametrically opposed parties, and we find out that we also have a lot in common."

The LEAD grant targets two neighborhoods, in the Tenderloin around Civic Center BART and in the Mission around 16th BART.

There are two types of diversions: pre-booking, in which a person in facing a choice between possible jail for a low-level non-violent offense, or an agreement to enter the LEAD program. The other is called a "social contact" diversion, which allows a referral into LEAD by a law enforcement officer who has witnessed LEAD-eligible behavior by the person in the target areas.

What's new and different about the program, compared to some others that have been tried in the past, is that it does not require drug abstinence or drug testing, and it emphasizes the here and now. "What can we do to help you out TODAY?" officers ask. The tone is more caring than judgmental; officers in the program all go through training to help them understand what it is, and what it is not.

It is, most assuredly, not a metaphorical or literal "get out of jail free" card. The referred person has 30 days to show up and do an intake with a case worker, who can help them with job training, housing assistance, or addiction recovery when they are ready for it. Participation must be voluntary -- BART officers record the conversations on their body-worn cameras so they have the person's verbal agreement to participate. A person does not have to be homeless to participate in the LEAD program. 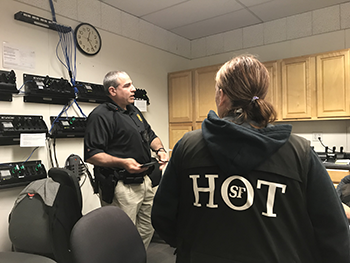 The participating law enforcement agencies are BART Police, San Francisco Police, and the San Francisco Sheriff's Department. The LEAD grant began in April 2017 and continues through June of 2019. There are many other city, county and community-based partners, including GLIDE and Felton Institute, an important piece of the puzzle because it adds the benefit mental health clinicians. (Image at right, Officer Hofstein and a member of San Francisco's Homeless Outreach Team at a collaboration meeting)

“Addiction is a medical diagnosis,” said Dr. Angelica Almeida, SFDPH Project Director for LEAD. “Recovery takes time. We support people wherever they’re at, one step at a time.” Almeida will speak before the BART Board of Directors at its Thursday, Dec. 7, meeting to give an update on LEAD.

LEAD is just one part of a multi-pronged approach BART is taking to work with the community to find solutions to the homelessness crisis. In other steps, BART works with organizations in each of the counties it serves to address root causes of the problem, along with regular patrols of stairwells, corridors and platforms to do welfare checks and assist people out of stations if they are not traveling from a Point A to a Point B, in possession of a ticket. BART also employees a fulltime crisis intervention trainer/homeless outreach coordinator, Armando Sandoval, who is part of LEAD and other working groups.

On walkalongs and ridealongs with multiple teams of officers, this approach is demonstrated again and again. In one case, an elderly man is stiff from sleeping on the floor of the station and has difficulty rising. Two officers gently make loops with their arms to their hips so the man can grab hold and be helped to the elevator. In one 90-minute period more than a dozen such contacts are made, and these foot patrols are a part of every officer's job. If the person is uncooperative or violent, they may receive a warning, citation or trip to jail, depending upon their record. 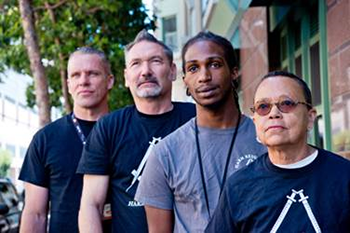 It can seem daunting. The same people account for many of the contacts; there is a repetition about the job that could strip hope from all but the most resilient. And yet.

Officers like Touye and Hofstein keep trying. They’re getting shifts carved out to do this work in a focused way, and even different uniforms for LEAD patrols – not the formal dark blue, but a khakis-and-polo-shirt attire that may be more approachable for some.The week after 23-year-old Jessica's LEAD referral, Hofstein couldn't say for sure if she would follow through on her end to meet with the caseworker. "I saw her in the station again," he recalled, and she skittered away.

Jessica could be one of the lucky ones. She is young. Not yet completely set in her ways. She has a mother who writes heartbreaking pleas to the officers, asking them to look out for her daughter. The mother asks what she can send instead of money, fearing the money would go to drugs.