Building bridges: BART PD's Shop With A Cop program helps those in need

Building bridges: BART PD's Shop With A Cop program helps those in need 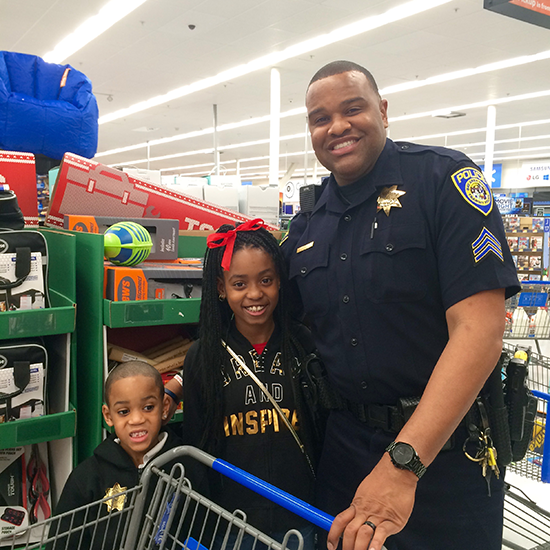 The holiday season brings joy and warmth to the Bay Area, and around 50 families are feeling the love this year as their kids get a shopping spree with help from BART Police and partners.

Sgt. Ja'Son Scott, who initiated the program at BART, said the idea behind the annual Shop With a Cop has always been to reach out to disadvantaged families with children and "give them a sense of a happy holiday." This year's event was last night on Tuesday, Dec. 12.

BART Police Chief Carlos Rojas said the event has a lasting impact by building bridges to the community.

"It fosters positive relationships between police departments and the community, and allows for an opportunity for both the officers and recipients of these gifts to see each other in a different context," he said. "It's not always in the official capacity as a police officer or in or in a person's neighborhood where something negative or challenging may be happening. This is a very safe and neutral environment and a very positive evet, which builds a better understanding and relationships between the community and the police."

BART, Oakland and Piedmont Police vehicles were parked outside of the San Leandro Walmart, and regular patrons were surprised to see a sea of officers in uniform (and the occasional Santa Claus hat), flooding the store to help kids do their holiday shopping. Kids filled carts with Nerf footballs, T-shirts and jackets, light sabers and paint sets.

BART PD partnered with organizations like the Davis Street Family Resource Center in San Leandro, Union City Kids Zone, some domestic violence safe houses, local schools and churches to select the famlies each year who will participate. "Who better to know what people are in the most need than those who work with them every day?", Scott said.

Around $6,000 was raised for children's shopping through donations from BART employees, and fundraisers selling donated cupcakes from local gourmet bakeries.

Each child gets $100 to spend and must select one clothing item, one school item, and can use the rest for toys, for themselves or to buy gifts for others.

After warming up with hot chocolate and cookies, an Oakland fourth-grader named Emily gother face painted with gold glitter while her brother lines up with officers to get pictures with Santa and crimefighting canine McGruff. Emily's mother explained how much her family appreciates this Shop With a Cop event:

"This is a great opportunity because it's hard being a single mom with two kids, and in the past, we wouldn't have had anything (under the tree)," she said. Her family was recommended to the program by the pastor at their church, Allen Temple Spanish Ministries in Oakland.

Many BART officers have participated in the event for years.

"Community policing and community outreach is one of the reasons I became a police officer," said Sgt. Sean Fenner, who has been with BART PD more than 20 y 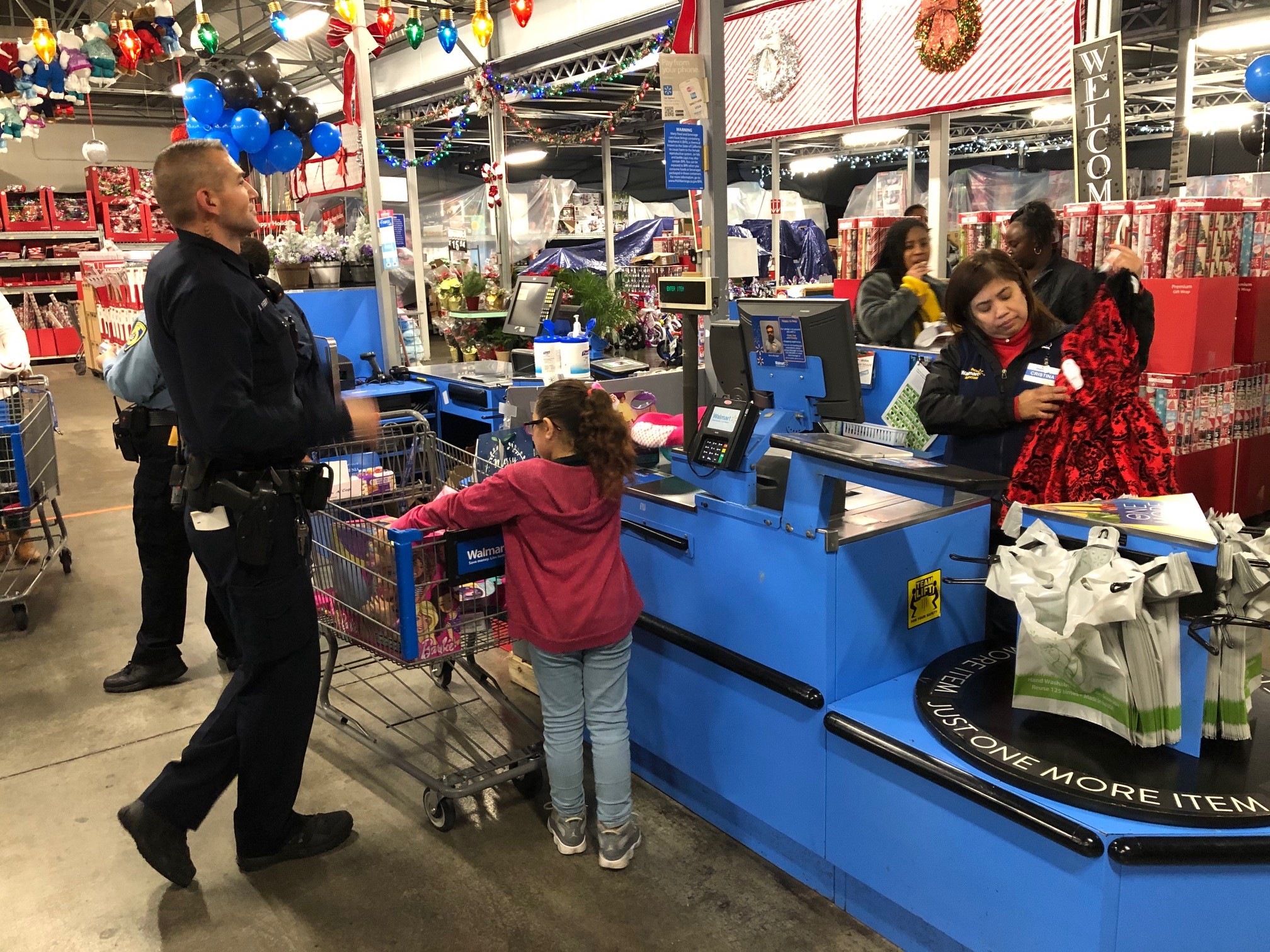 "The Shop With a Cop program allows me, along with the BART Police Department, to immediately impact the children in our district with holiday cheer and to build lasting relationships."

Officer Steve Vierra, an 18-year veteran of the Oakland PD, was attending his first Shop With a Cop, along with young shopping buddy Joe. "I am happy to see the turnout and collaboration between departments and I like the premise behind it," Vierra said. He and Joe teamed up to find a Hot Wheels race track. Joe tried out a comfy kids' bean bag chair and a light saber (image of Vierra and Joe at right).

Joujoux, another young Oakland shopper, was paried with BART PD Officer Chris Plumley, who was excited to attendhis first Shop With a Cop and sported a Santa hat and contagious jolliness for the occasion. "I love working with the kids and seeing them be able to shop without any worries, like a kid should. Joujoux is being super smart with his money and thinking about what he needs for school and personal care." (Image below of Officer Plumley with Joujoux) 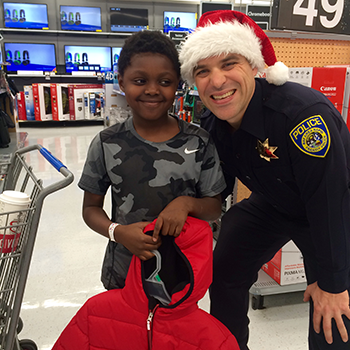 Officer Plumley showed off their card, which had a puffy winter jacket, pencils, erasers, notebooks and other practical items. "And we've only spent $20 so far!," Plumley said, very impressed. With the remaining money, Joujoux is looking for a small drone and knows exactly which AV cable he needs to connect an Xbox. This tech-savvy shopper says he likes science, but his favorite subject in school is math.

Meanwhile Emily looks at bicycles while her 11-year-old brother piles Halo action figures in the cart, talling the total in his head for BART PD's Tanzanika Carter to write down. (Image below of Carter with young shoppers).

Carter, an 18-year BPD veteran, is glad the event is growing each year, with more departments like th Piedmont PD getting involved. She has done Shop With a Cop for many years and sometimes brings her daughter along to help.

Just like Carter, many in the department have a personal connection with this event and the organizations involved.

Sgt. Scott, who has two kids of his own, volunteers regularly with the Davis Street Family Resource Center, and many families were recommended by personal connections with the schools. 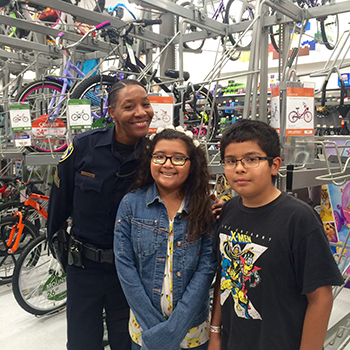 Community Service Officer Jennifer O'Connell volunteers with the Special Olympics and shopped with a child with from that organizaton. "It has brought more understanding and caring into my work with BART," she said about her Special Olympics volunteer assistance.

Chief Rojas was busy explaining to other shoppers what Shop With a Cop is all about. He wants a positive and visible police presence in the BART system as well as in the communities BART serves.

'Shop With a Cop is expected to expand in the future to include more departments and serve more families. At the end of the big shopping spree, children headed back to their families with bags stuffed full. Officers headed to their next shift with the joy of having helped a family in need and having built bridges for the future.