BART congratulates the Golden State Warriors for winning the NBA Championship for the third time in the last four seasons!  Now that the Warriors have once again taken care of business on the floor, it’s BART’s turn to help the Bay Area celebrate a basketball dynasty. We’re gearing up for an epic day on Tuesday when Oakland hosts a victory celebration starting at 11 am.  This latest party will be a bit different from years past because there will not be a post-parade rally at Lake Merritt.

We’ve put together some quick tips to help make your championship parade a slam dunk experience. 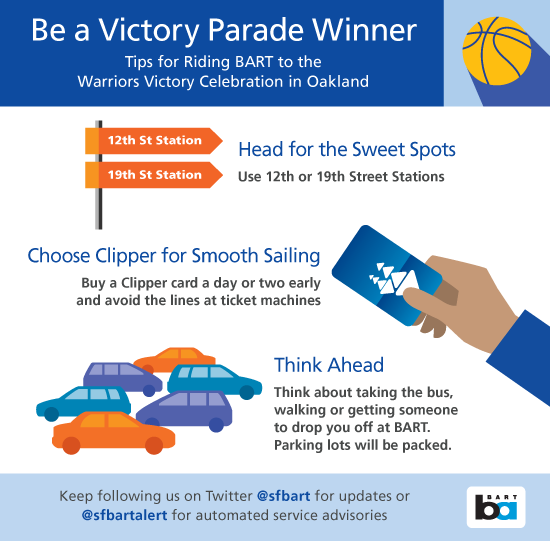 Top tips for riding BART to the victory celebration in Oakland

First, know that BART is going to be crowded. On the day of the 2017 Warriors parade, BART carried 518,743 people – the fifth highest ridership day in the history of BART!

If you must drive and park at a BART station, consider getting there very early. Parking will be packed so instead, if you can, we suggest taking the bus or walking to BART or getting someone to drop you off at your station.

If you do drive and park, remember “Permit” spaces are for passengers who have paid for monthly and single day permits in advance.  Those without a permit may only park in the “Fee” areas, which are First-Come/First-Serve.  If you park in the “Permit” area without a permit, you are subject to citation.

If you have a permit, we recommend you arrive early to be safe.

Coming from San Francisco?  SFMTA has several public parking garages in San Francisco that are located within walking distance to BART stations.

Service changes to be aware of

The following trains that originate at North Concord in the morning: 6:59 am, 7:14 am, 7:29 am, will still pick up at North Concord but will only go into Downtown Oakland, instead of going continuing to San Francisco, they will then be diverted towards Dublin or Warm Springs.

The 8:42am train that originates at Pleasant Hill will be cancelled.  It will be used in other crowded areas of the system.

At any time, we may need to skip a station due to crowding, or hold riders outside the fare gates and wait until the platform clears to allow riders to enter the paid area.  Listen to instructions from BART workers- we’re here to help.

Don’t be the person stuck in a line for the ticket vending machine while Steph and KD are waving to the crowd. If you don’t have one already, we suggest you buy a Clipper card at least a day or two in advance.

Every BART station has at least one Clipper vending machine.

BART will have tables the morning of the parade for purchasing Clipper cards at Pittsburg/Bay Point, Dublin, and Fremont (the three stations we had the longest ticket vending machine lines last year). The cards will be available for $14 each.  That includes $11 worth of rides and the standard $3 one-time activation fee. Cash or credit cards will be accepted.

We are doing extra maintenance now so we can put every available train out to carry passengers, but you’ll be joining a half million or more fellow riders.

We strongly suggest taking BART to either 12th Street or 19th Street stations in Oakland. They are right along the parade route.

Passengers coming from the Warm Springs directions should NOT wait for the Richmond Orange Line train, take a Daly City train if it comes first and exit at Lake Merritt.

19th and 12th will also be your best options for starting your trip home.

BART staff will be positioned at street level and in stations to help. 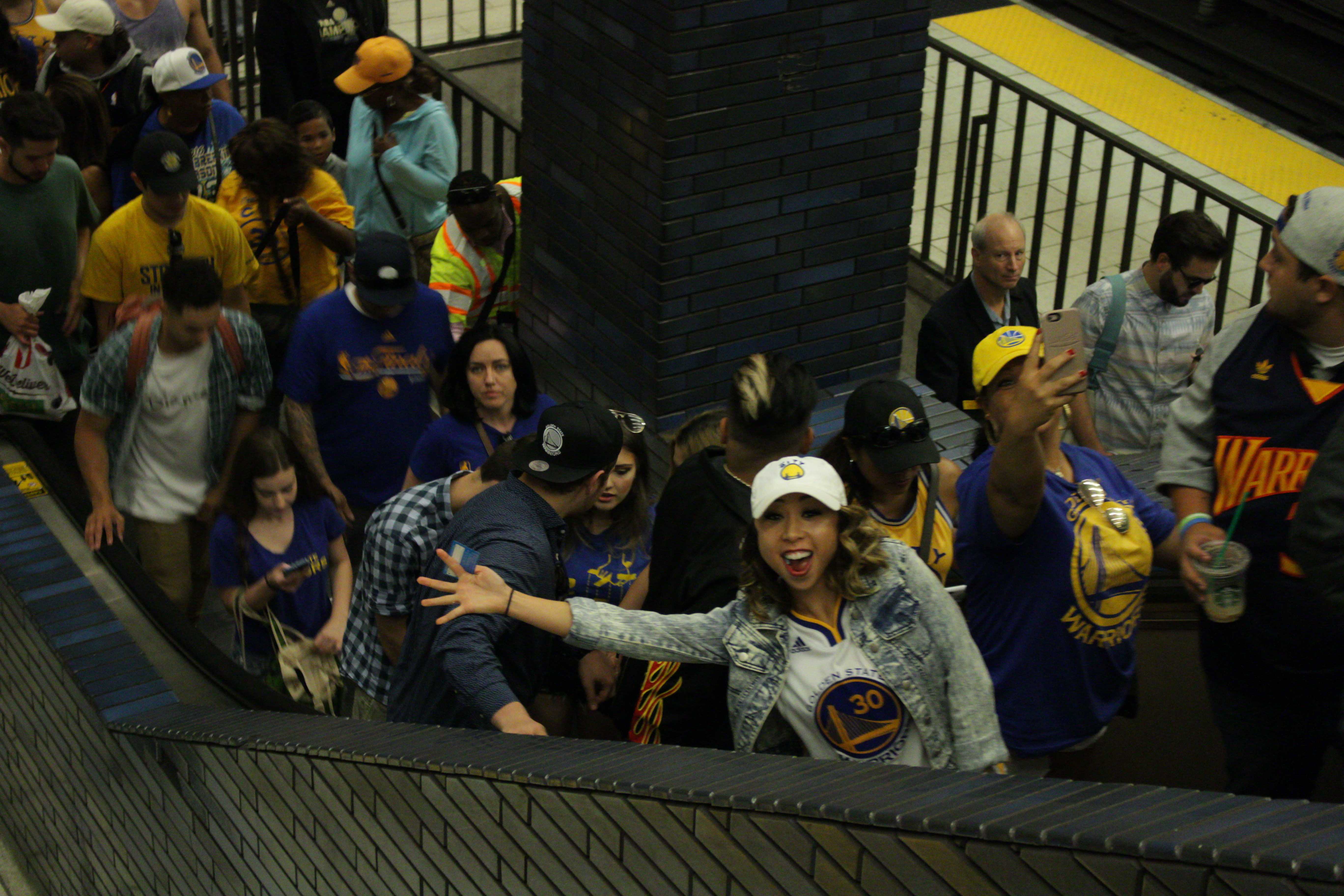 What we’re doing to prepare

Besides getting all the train cars ready, we are staffing up to make sure we can quickly respond to any issues that pop up. We will have extra paramedics on standby and extra police officers on patrol including the Transportation Security Administration’s VIPR team.

We’ll have extra escalator and elevator technicians in our stations, and train technicians ready to respond to an equipment problem on a train.

Riders should lock their bikes up with two u-locks at their origin BART stations and NOT bring their bikes to the parade. Bikes are not allowed on crowded trains and are never allowed in the first car. Details on secure bike parking can be found here: http://www.bart.gov/guide/bikes

If you must bring a bike into downtown Oakland, we ask that you exit at Lake Merritt.

If you See Something, Say Something

Help keep this event safe.  If you See Something, Say Something. Call BART Police 510-464-7000. Download the free BART Watch App, it lets you send a message to police dispatch.

Finally, it probably goes without saying but we’ll say it anyway: smile and have fun. We at BART enjoy serving you on what should be a joyous and memorable day. We only ask that you show common courtesy to your fellow riders, follow our simple rules and -if you start to get a little impatient- think about the folks in Cleveland who wish they had a parade to celebrate a basketball dynasty.

Our BARTmobile will be in the parade so be sure to gives us a wave as we pass by. 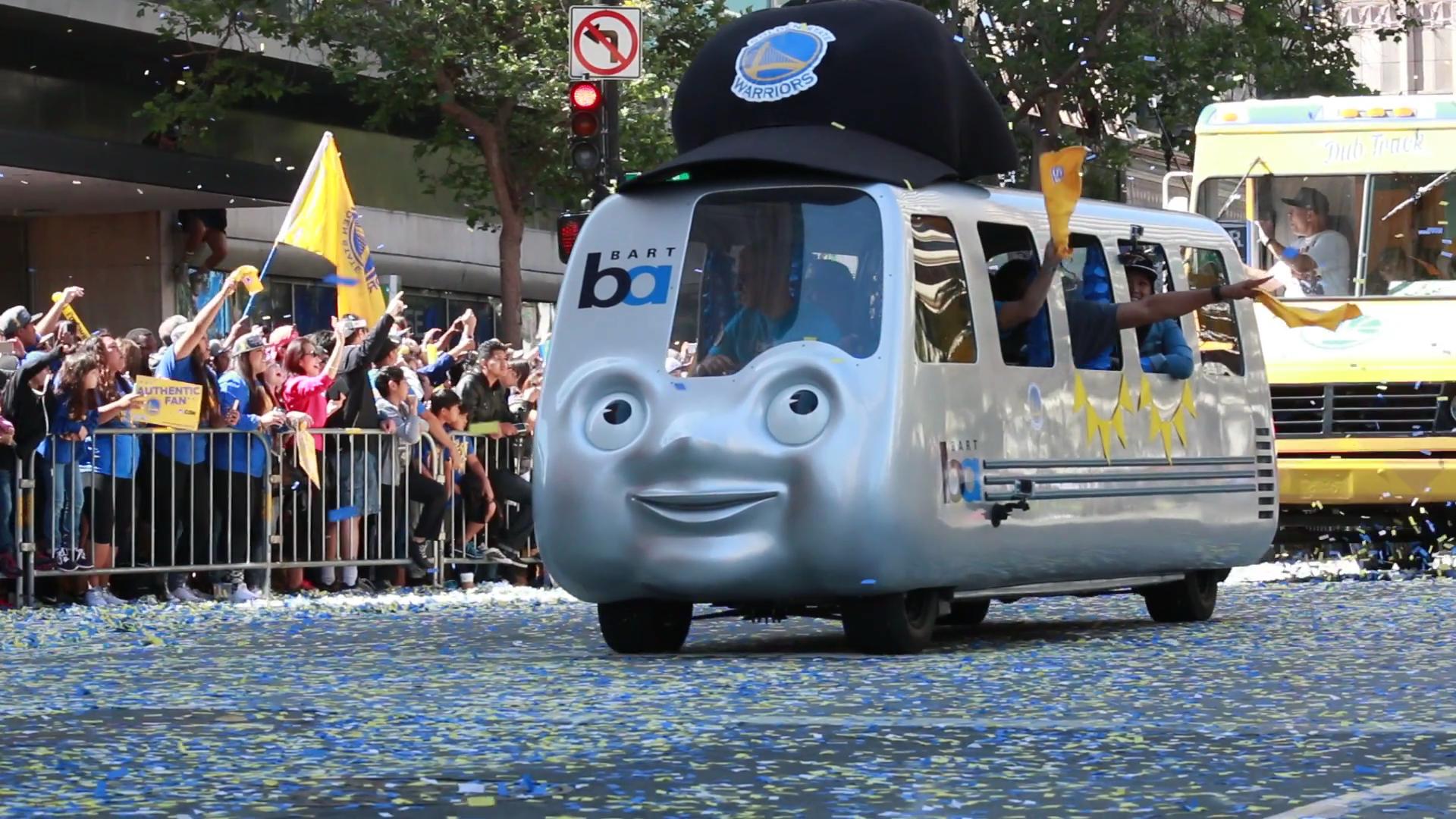