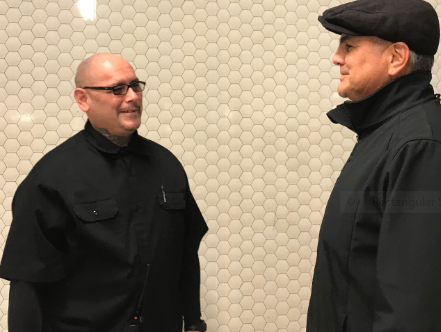 A Good Samaritan rider who cared enough to delay his Monday commute and a BART contractor who recently lost a loved one to the opioid epidemic saved a life at Civic Center Station.

Frank Altamirano, a supervisor with the Hunters Point Family nonprofit that staffs an elevator attendant pilot program, had emotion in his voice as he talked about the incident on Wednesday.

“It was only a few months ago that I lost a family member who was only 22 years old,” he said, “so it was fresh in my mind when a patron flagged me down because he saw me with my radio.”   (Image: Altamirano, left, and Sandoval)

It was around 8:30 am on Monday, Dec. 10, and the patron was on his way to work, but noticed a man who appeared to have overdosed on the floor of the station and asked for Altamirano’s help.

Altamirano raced to a storage cabinet where the Hunters Point Family staff keep doses of the opioid antidote Narcan, in nasal spray version, ran back and administered it to the victim, who had been injecting drugs.  (Image: Narcan dose)

“The Good Samaritan had to get to work but he asked me if I could stay with this man until the paramedics came,” Altamirano recalled. “To me it just showed his humanity to care enough about this person who was so close to death and want him not to be alone.” Two BART Station Agents, Renita Johnson and Yvette Baker, assisted with the man's rescue as well. 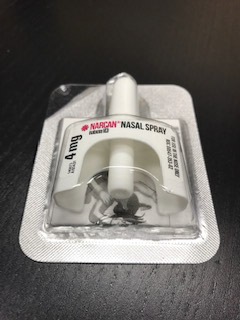 The victim, a man in his 40s, “was turning blue and his pulse was almost non-existent,” Altamirano said. “What struck me was, as soon as the Narcan hit, I could literally watch his chest begin to move as his heart started beating. He woke up and I told him, ‘You’re playing with death, man.’ “

“He apologized to me,” Altamirano said, “and thanked me.” He said paramedics transported the victim to a hospital. Altamirano didn’t know what happened after that but said he hoped the near-death experience would be the motivating factor for the man to get help.

"That patron and Frank were heroes," said Station Agent Renita Johnson. "I've been working at Civic Center a long time, and the people, the regulars who come in and out every day, are really caring, compassionate people. That's why I stay at this station."

Station Agent Yvette Baker waited with the man while Altamirano went to his locker. "I was so glad Frank was able to give the man the Narcan," Baker said. "Without it, I think things would have ended very differently. I don't think he would have made it."

Narcan is already kept by members of the Hunters Point Family staff, as well as by BART’s Homeless Outreach Team (HOT) partners.  A working group at BART is planning to implement Narcan to be carried by BART Police Department officers by sometime early in 2019, said Armando Sandoval, BPD Community Outreach Liaison and Crisis Intervention Team coordinator.

Sandoval noted the dramatic increase nationwide in the availability of dangerous synthetic opioids, such as fentanyl, which is often used as an adulterant in heroin and other street drugs.

Fentanyl is highly potent, so much so that a few grains could be lethal, according to the U.S Drug Enforcement Administration’s briefing guide for first responders. (See image next to penny for size comparison; taken from DEA briefing guide.)

“It’s a public health crisis,” Sandoval said. “We’re dealing with the safety of the public, police and first responders, BART employees such as cleaners, our partners and the individuals themselves who have addiction,” he said. “We’re being proactive because you can either get out in front of it, or get out of the way.”

You can read more about BART’s efforts to collaborate with the communities we serve to combat social ills such as homelessness and the opioid epidemic at our Social Resources page.