As Fleet of the Future grows, plan for retiring legacy fleet takes shape

As Fleet of the Future grows, plan for retiring legacy fleet takes shape 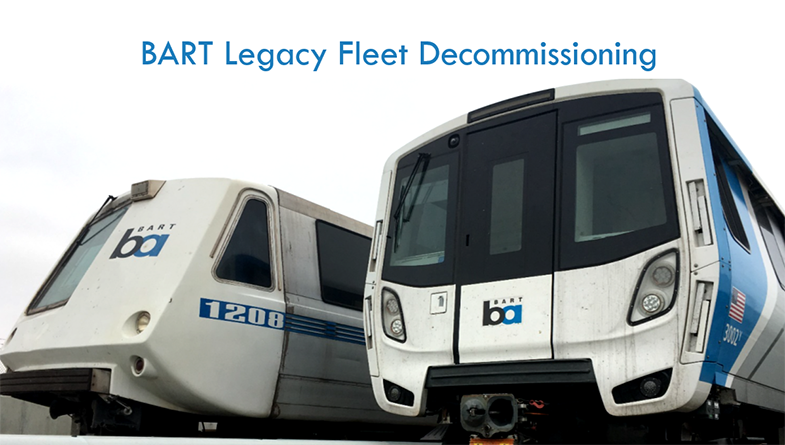 With a steady flow of new Fleet of the Future trains arriving in 2019, BART is planning what to do with the fleet of the past – the “legacy” train cars that have served the Bay Area with many dating to the start of BART in 1972.

There’s lots of public interest in what will happen to the old train cars: Could they be donated to museums? Turned into homeless shelters? Used at tech schools for mobile classrooms? Repurposed into container-cart coffee shops? Or sold off as scrap metal to the highest bidder?

“It is a complicated balancing act because we have an operational need to expand service and lengthen trains; we’re depending on the Fleet of the Future delivery schedule; we have to plan for enough storage for all the train cars; and we’re figuring out what to do with the old ones as they are retired,” said Philip Kamhi, Special Projects Manager for Rolling Stock & Shops, and the lead on the decommissioning.

One pinch point will come in early 2020, when BART’s capacity to store the growing fleet for maintenance will be maxing out.  Over the next couple of years, there will come a point where there are more new cars running on BART lines than old cars.  It’s estimated that the entire legacy fleet retirement will be completed by the end of 2023. But BART can’t do just anything it feels like with the old cars – as much as some might like to see them used as planters, tiny homes or art installations.

The Federal Transit Administration (Circular 5010.1E) requires that after the useful life of federally assisted property is reached, rolling stock may be sold. If the FTA-assisted property is determined to have a market value that exceeds $5,000 per unit, the FTA is entitled to an amount calculated by multiplying the current market value, or net proceeds from sales, by FTA’s percentage of participation in the cost of the original purchase.

This calculus is important because BART must exercise sound financial stewardship over the process. Take, as a hypothetical example, if a single train car were valued at $10,000, and funded originally at about 70% by FTA. If that car were sold for scrap, BART must pay the FTA its share back of around $7,000.  And even if that train car were donated free of charge to a museum, the FTA would still have to be paid its $7,000 share, putting BART out of pocket for that money.

The car selection criteria for decommissioning will take into consideration the following, at a minimum:

A delicate dance will be involved as Fleet of the Future cars eventually enable all peak-period Transbay trains to be 10 cars long, easing capacity concerns. The Fleet Disposition Team will manage the process, including selecting which parts should be harvested from retired vehicles and choosing which cars with the highest failure rates get retired first.

Financial Planning stakeholders will ensure that FTA financial commitments have been met and receive any sale or scrap value into the General Fund. The Procurement Department will assist with disposition of cars, such as advertising them for sale and negotiating with external vendors. Legal will ensure legal compliance, and marketing will outreach to provide information and engage the public on what should be done with the old cars.

Some ideas that have caught the public’s eye in other places aren’t a good fit for the BART fleet. As an example, some carbon steel subway cars from other systems have been sunk into the ocean for use as part of an artificial reef, but the aluminum composition of BART cars prevents this from being feasible. Some agencies can sell off their train cars to be reused by other systems; BART, however, operates on a non-standard gauge or track width that wouldn’t work in most places.

One day in the future, there will be a retirement announcement and ceremony as the last of the original BART cars rolls off into the sunset. You’ve got some time if you’d like to share input on what you think should be done with them. You’re invited to attend the Board meeting on Jan. 10 to give your input or watch a livestream of the presentation at www.bart.gov/board And, as always, you can contact us here: www.bart.gov/contact

Kamhi said he expects plenty of public input because of the iconic role the BART train cars have had for the Bay Area for nearly a half-century. “I appreciate the nostalgia associated with the retirement of BART’s legacy fleet,” said Kamhi, who will make a presentation to the Board on Thursday. It’s an “information only” item on the agenda and will not require a vote or any action by the Board. “I’m excited to be tasked with making room for the beautiful new Fleet of the Future trains.”